A few weeks ago when I posted a recipe for Korean Lettuce Wraps, I was reminded by my “one year ago” memory of the post I wrote about our Thanksgiving trip to The Cotswolds.  That trip feels like an entire lifetime ago.  Travel?  To a foreign country?  On a plane, with other people, staying in hotels and eating in restaurants?  Visiting museums, strolling through shops, attending a show?  How extravagant, decadent and simply luxurious that sounds right now, 9 months into the pandemic.  Heck, going anywhere other than my kitchen, basement or bedroom sounds like a holiday at this point.

Now, it has been mentioned countless times here on The Kitchen Scout that I married into a family that essentially eschews most desserts.  They do like ice cream and my husband does enjoy homemade cookies .  Maybe a slice of pie on occasion.  But cake?  No, not really although one Easter I do remember a few folks enjoying my mother’s Carrot Pineapple Cake for dessert.  Well, at one of our dinners in the Cotswolds, I ordered sticky toffee pudding for dessert, something I had never had and long wanted to try given my appreciation for sweets.  It came as a complete shocker that the hubs and I shared and that he helped wipe the plate clean.  Scrumptious is the best word to describe it.

Maybe it was the setting, a romantic table for two at Huxley’s, an intimate restaurant in Chipping Camden that made him indulge in the sugary treat… 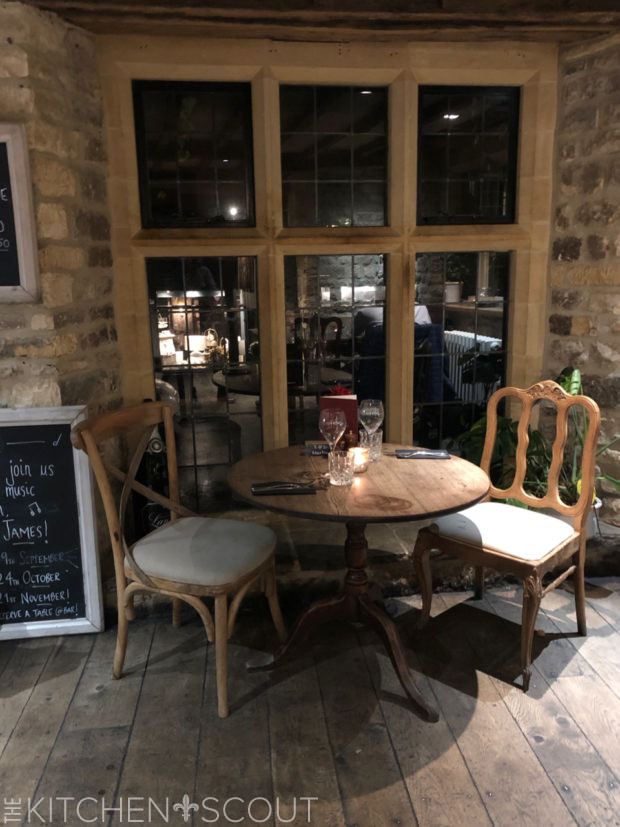 I will perhaps never solve the mystery but here is a picture of the “pudding” which, as you all probably know is the Brit’s way of saying dessert.  Sticky Toffee “Pudding” is essentially a date cake that is drenched with a caramel sauce.  My teeth are decaying just thinking about it but every once in a while… 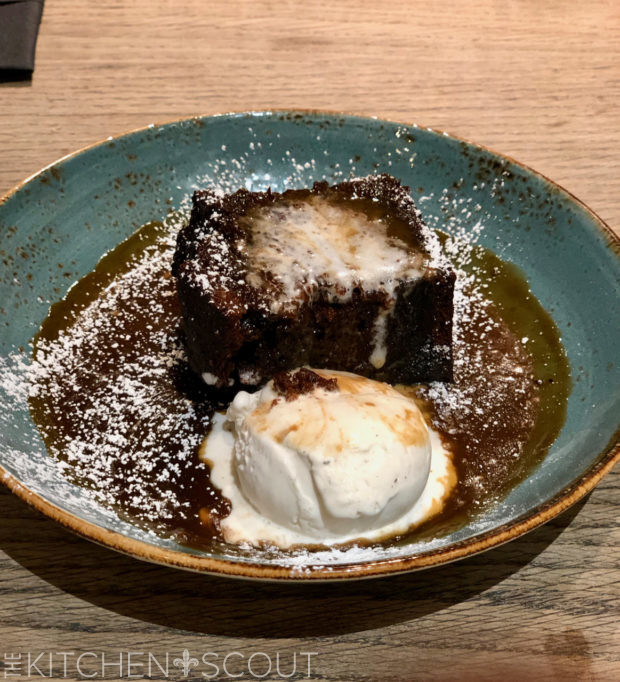 Reading the post reminded me that I had wanted to try to recreate this dessert at home.  I posted a photo to Instagram stories of my first crack at the dessert suggesting I was doing “research” and it struck a note with a lot of my followers!  Clearly this is a favorite dessert among many and I wish you could have been here because sadly, the magic of being in The Cotswolds wore off and you know who passed on sampling my pudding!  Every time I say pudding it reminds me of that Pink Floyd song, Another Brick in the Wall.  “How can you have any pudding if you haven’t eaten yer meat?!”

I had so many recipes to choose from, including many sent to me by my cousin Karen, also a huge fan of STP.  But I decided to go with Nigella Lawson’s version because well, she’s British and she’s Nigella.  Hers was a seductive version, full of dark brown sugar, molasses and dates and topped with a very sweet caramel sauce.  Easy to make, and a reasonably sized 8-inch cake to serve 8 or thereabouts.  Lovely.  I thought it was delicious and so did my neighbor with whom I shared some.  But I did think the cake was just a teeny bit dry if I’m being super picky although once the sauce was on it, it didn’t matter a bit.  Actually looking at this photo again, it was pretty darn delicious at the end of the day.  I added some coffee ice cream because why not?  We’re in a pandemic after all… 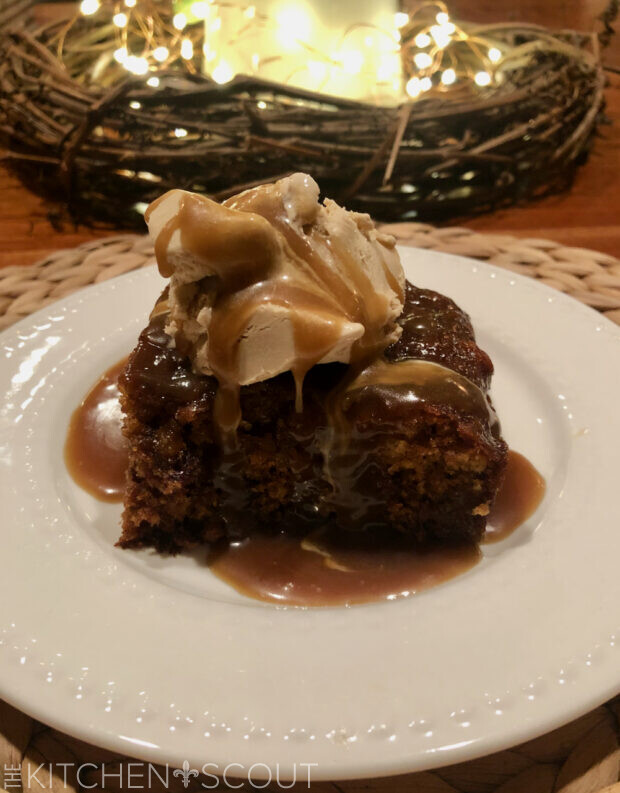 Never one to be satisfied with the first try (although trust me if you make Nigella’s you won’t be disappointed), I decided to make a spreadsheet to look at all the other recipes I had either been sent, or had found on my own.  There’s this recipe by Gordon Hammersley, but it makes just 4 servings which may be fine during Covid but isn’t practical long term when we can gather again in large groups!  There was also this recipe by the famous British cook and judge on the Great British Bake Off, Mary Berry but alas that pudding was made without a date in sight.  There was a Warm Date Cake from the Gjelina cookbook to consider (served with a whiskey spiked sauce) and lastly, all the ones sent by my cousin.  The one she made and loved from Epicurious you can find here and it is quite similar to Nigella’s, although it is double the weight and made in a bundt pan so serves a lot.

My friend, Susan Coyne, shared a recipe that she loved after she saw my Instagram post and we went back and forth a bit about STP!  (Please check out Susan’s website, linked, where she shares her beautiful paintings).  Susan’s recipe came from the Sconset Cafe cookbook circa 1985 by Pamela McKinstry, and was a variation on a recipe from the Sharrow Bay Hotel in England’s Lake District.  She sent me a photo of the recipe and its headnotes.

Looking at all of the various recipes on the spreadsheet I came to one conclusion.  You either have a sweet cake and a less sweet caramel sauce, or a modestly sweetened cake and a super sweet caramel sauce.  I guess it all evens out in the end, but I thought that was very interesting indeed.

In the end, I was only going to try one more recipe and I decided to try Susan’s.  It checked most of the boxes.  It made a reasonably sized cake (8 slices or so), was made with dates, and it looked efficient with ingredients.  It was a sweet cake with a less sweet sauce.  What I wasn’t thrilled with was that it was made with white sugar and I thought it should really be made with brown sugar and a touch of molasses so I did change that up and made notes on the recipe I am sharing below so you have all those details.  But what intrigued me the most was the method of making the batter – in a food processor which I thought was brilliant and would really add some air and lightness to the cake which it totally did.

The result was a super moist, sweet cake that was much lighter in color and less intense than Nigella’s.  The caramel sauce was just sweet enough and together it was a marriage in sugar heaven.  I baked mine in a 11X7 pan, because my 8-inch dish was occupied and it came out just fine as they are both 2-quart in volume.  Two friends were the recipient of some of the cake, and one of them texted me that “the sticky toffee pudding was out of this world.  Total perfection.  You nailed it!  Not too sweet, not too sticky, ha ha.  The sauce is crazy delicious.  Thank you for sharing such a yummy treat with us”.

As I mentioned, the recipe calls for 1 cup of granulated sugar.  I wanted the cake to be more reminiscent of the flavors of the pudding recipes that used a combination of brown sugars and molasses so I made a few changes.  Since most recipes do not suffer dramatically from a small reduction in sugar, I substituted 1/2 cup light brown sugar, 1/4 cup dark brown sugar and 2 Tablespoons of molasses instead.  I also cut back a smidge on the sugar in the caramel sauce and replaced it with a drip of molasses.  And I added a pinch of salt to the cake batter which always helps with flavor and balancing out all that sweetness!  I’ve put all those notes into the recipe below.  But any way you slice it (literally), it’s all sugar in its many forms and the darker you use the more intense and rich the flavor so you are in the driver’s seat here.  If you want to keep it simple, stick with the origninal recipe.

Here’s some shots of the second pudding, unadorned… 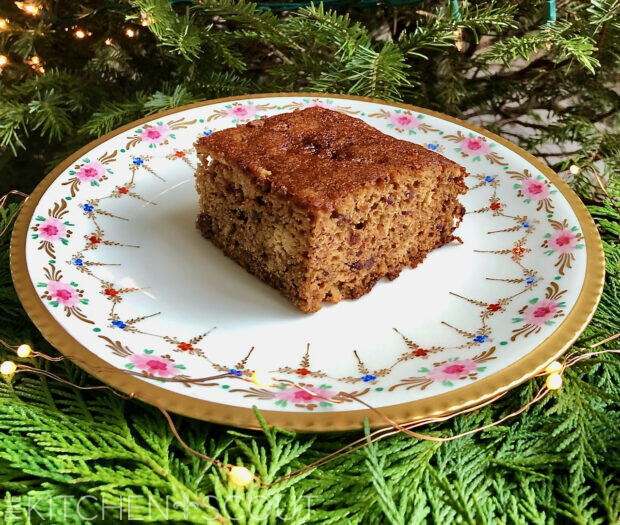 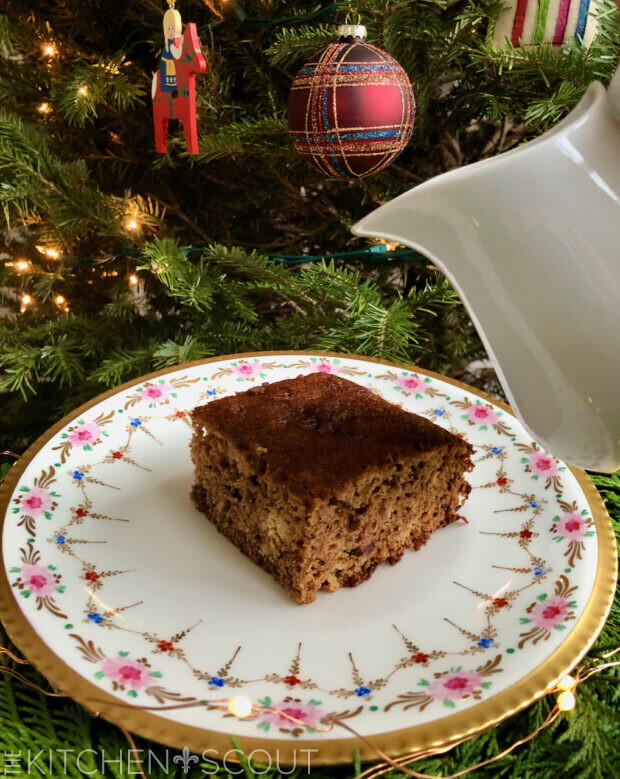 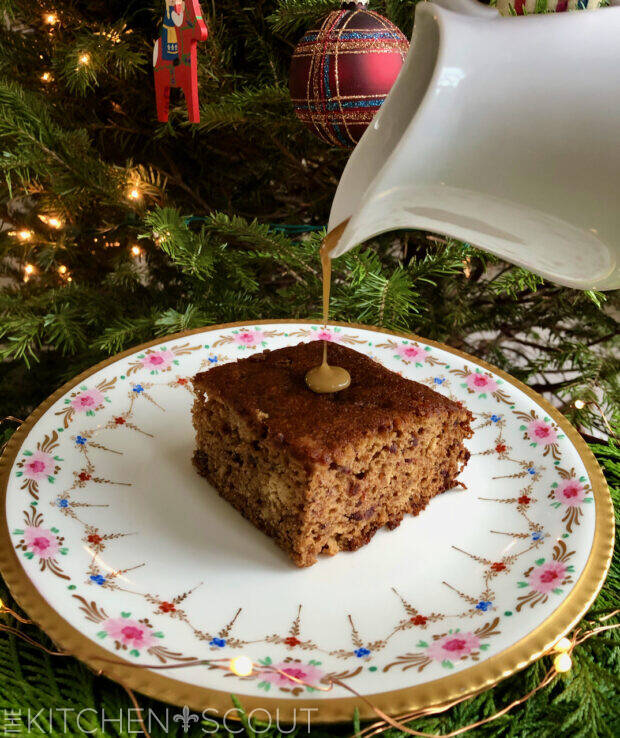 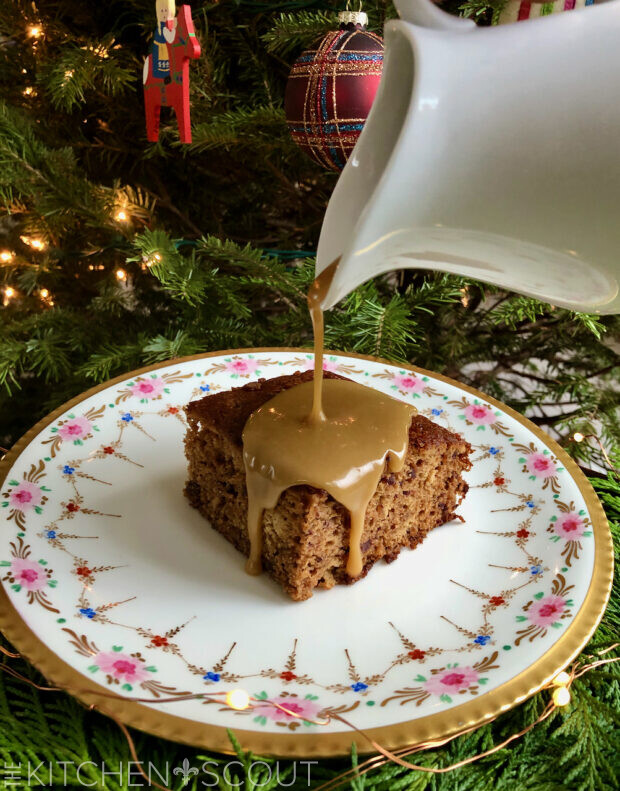 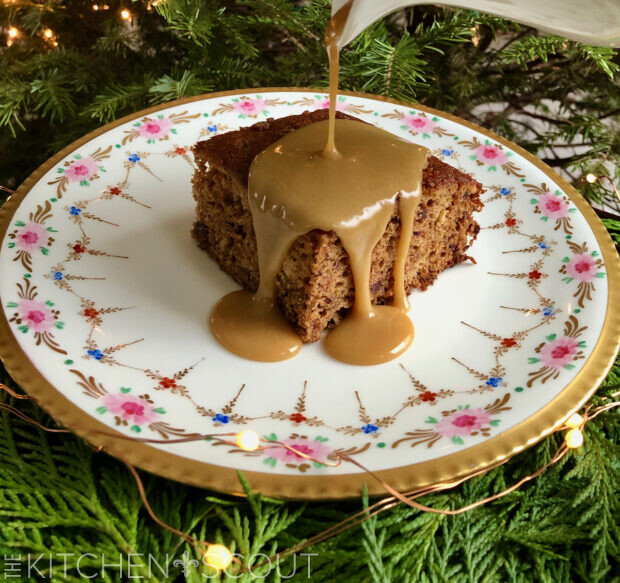 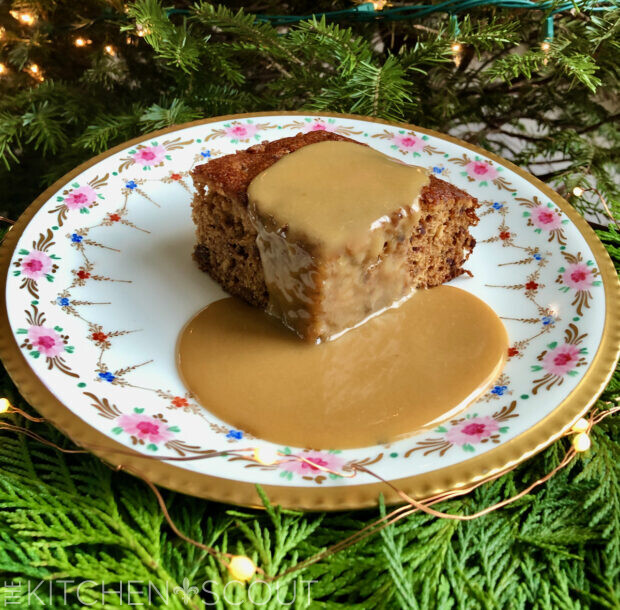 What do you think?  Will there be sticky toffee pudding in your future?  I hope so!

Wishing everyone very happy holidays.  I will try to do a wrap up post that will be in your mailbox next Friday which also happens to be Christmas but I don’t know how to change the delivery date in my Word Press!  Thank you to everyone for hanging in there with me during this crazy year!  Until next time… 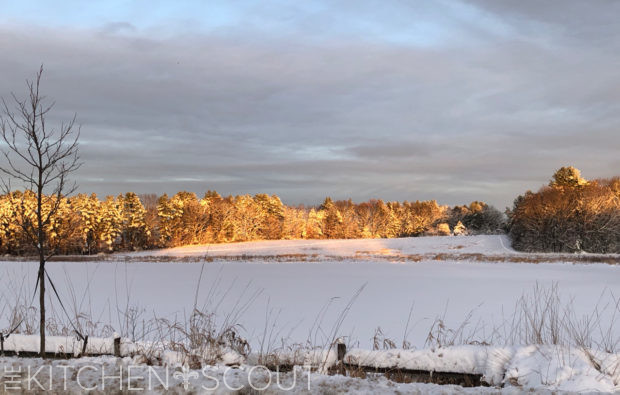 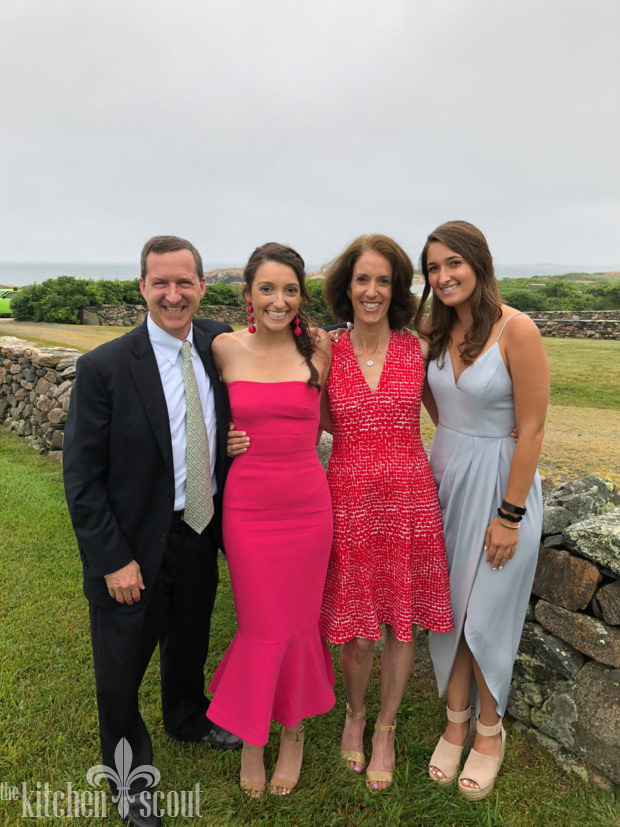 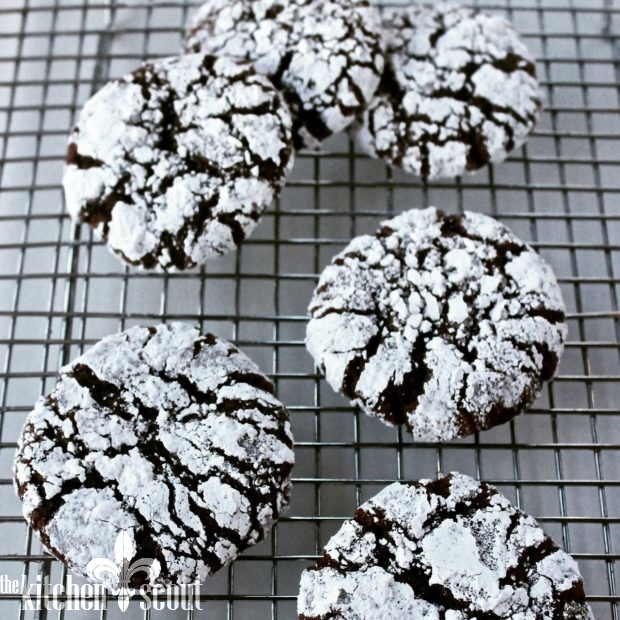 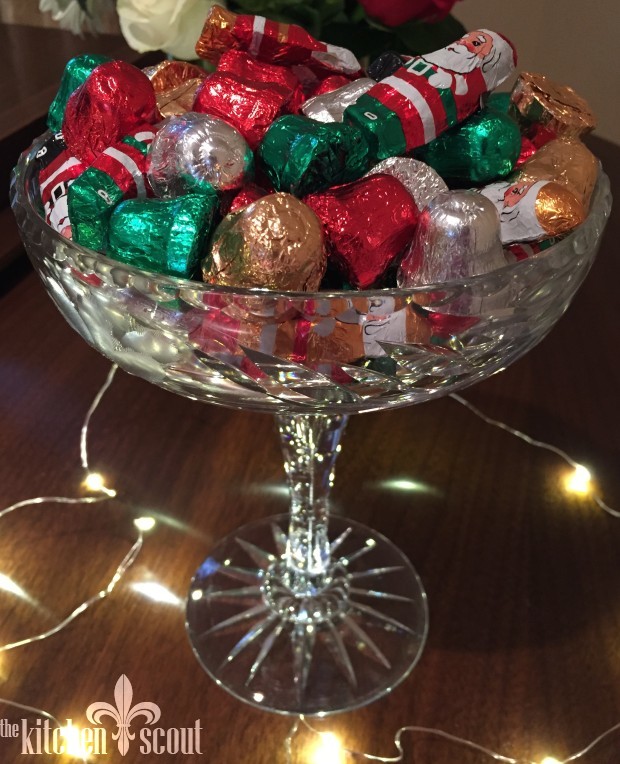 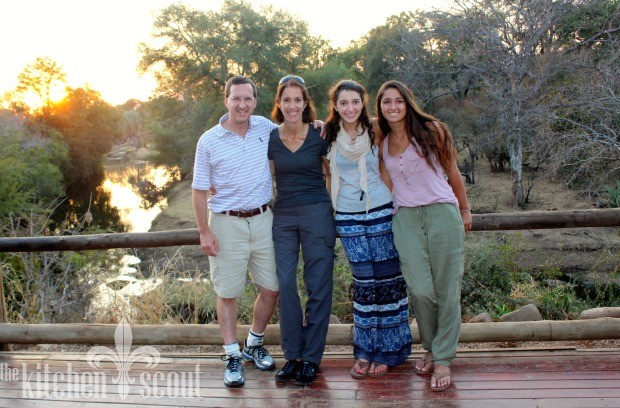 This recipe was sent to me by my friend, Susan Coyne. It was originally published in The Sconset Cafe Cookbook by Pamela McKinstry who adapted it from The Sharrow Bay Hotel in England's Lake District. Please refer to my notes at the bottom of the recipe for the subsitutions I made. I wanted to deepen the flavor by swapping out the white sugar with a combination of light and dark brown sugar with a hint of molasses. Same with the caramel sauce. I also added a pinch of salt to the cake batter. Either way, you can't go wrong with a sticky toffee pudding!

For the cake
For the caramel sauce

Make the cake
Make the Sauce