I know what you are probably thinking right now.  Good God lady, another salad?

Well, think of the recipe I am sharing this week more as either a salad OR a side dish because it really fits into both categorites.  If you need something to go under a protein, alongside a protein, or want to bring a crossover dish to your next pot luck, this may be the recipe for you!  Needless to say, it also works nicely on its own.

The reason I am sharing it this week is because I have had this recipe in my folder for YEARS and I have always looked admiringly at the accompanying photograph and proceeded to forget to make it when asparagus season is here.  The recipe comes from Rachel Ray Magazine, I forget the year, and the feature is about a woman named Donatella (not Versace) who is a fabulous entertainer, evidently, how would I know?

The recipe is easy, but should be assembled as close to serving time as possible.

Pine nuts are toasted in a pan and removed.  Asparagus spears, cut on a diagonal, are then sauteed in just a touch of olive oil until crisp tender and removed to a bowl full of shredded radicchio, endive, and just a touch of pepperoncini.  The radicchio and endive get their first wilt from the warmth of the asparagus.

But following, you make a warm vinaigrette with your best olive oil, a little bit of garlic and some balsamic vinegar that you place in a pan and reduce just slightly.

The warm vinaigrette is poured over the asparagus mixture, the nuts and some chopped parsley are added and everything is tossed together.

Served on a white platter (Donatella says so and so does Ina!), it looks so pretty… 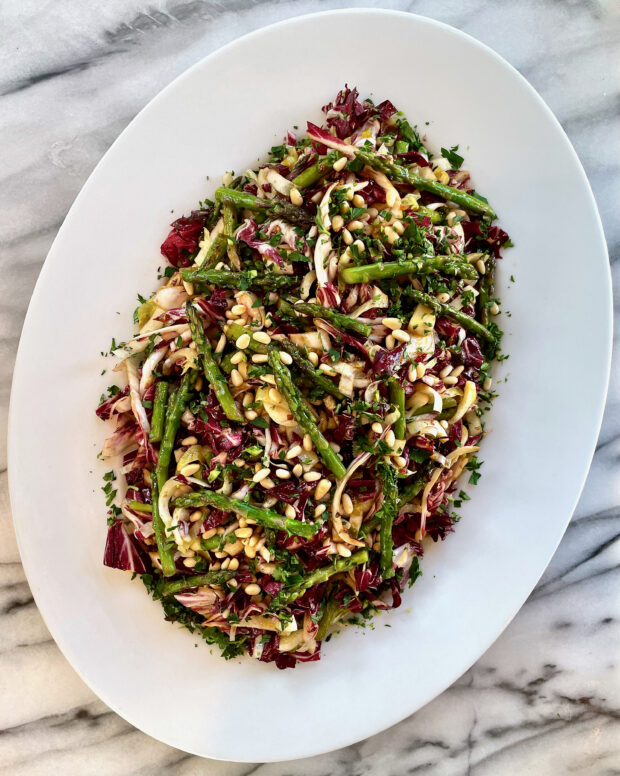 I hosted a small book group last night, early and outside, and had just finished making this so my friends all had some and really enjoyed it.  If you like bitter greens you will especially love this as they are the star of the show.  Honestly, I probably could have eaten half of this on my own but the recipe says it serves 8 as a side dish and I think that’s about right.

One friend thought she might add some fennel, as her husband who loves bitter greens also loves fennel.  I think you could add shards of parmesan or pecorino if you wanted a little cheesy bite.  But what I most love is its simplicity as you really can whip this up in no time.

And if you miss making this during asparagus season, I would maybe use some string beans or you could even saute some shaved brussels sprouts and add those – yum.  I may have to try that! 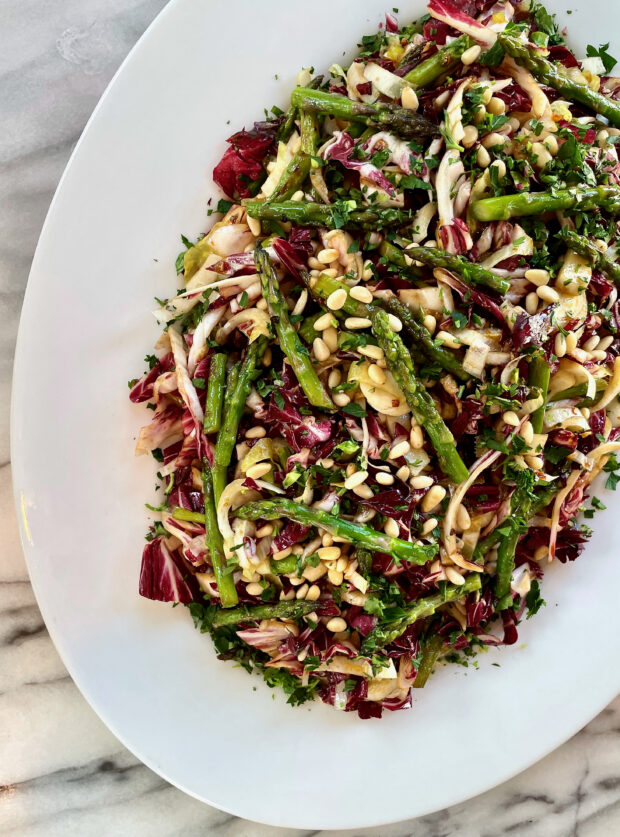 And because I made this other Asparagus Chopped Salad a few weeks ago, I wanted to share a link to this recipe too.  It’s a dish I actually enjoyed a really long time ago at Bobby Flay’s restaurant Bar Americain in New York City.  I loved it so much I asked the staff serving us if they could share the ingredients, which they did, but later I was able to find it written by Bobby in one of his cookbooks.  Since I can only publish one recipe at a time here on the blog, I am linking to the Asparagus Chopped Salad here.  Here is my photo for reference.  It’s a combo of greens, with cukes, tomatoes, olives, chickpeas, sharp cheddar and grilled or roasted asparagus, along with pita chip croutons.  Note, the pita chips are supposed to be tossed into the salad but I put them on the side as I knew we would have leftovers and they would get soggy… 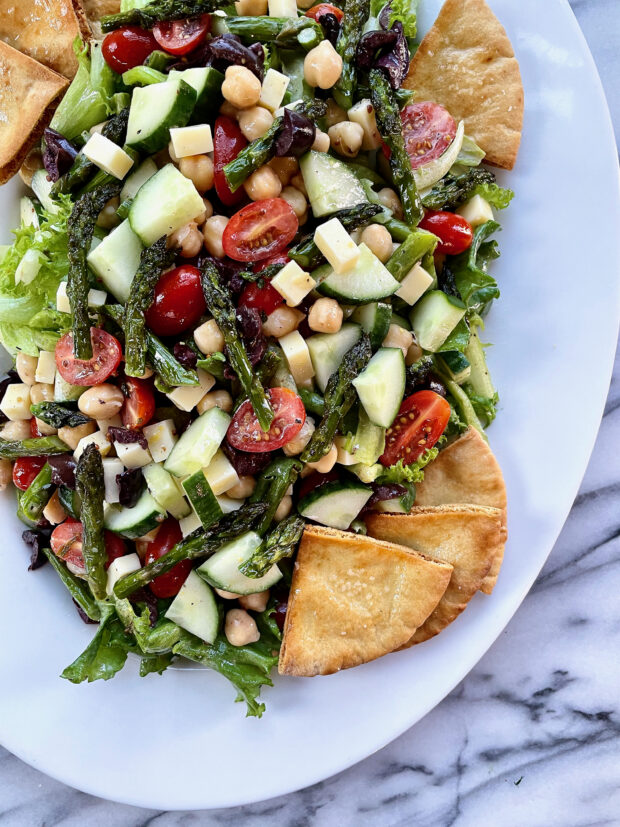 I don’t think you can go wrong with either salad/side dish next time you want to whip up something just a little different using the universally loved asaparagus.

Enjoy and please scroll to the bottom for the recipe for Wilted Radicchio, Endive and Asparagus Salad!

PS – I forgot to recognize that this past Mother’s Day was the 8th anniversary of The Kitchen Scout!  Honestly, I cannot believe it has been that long that I’ve been on this crazy adventure but I have really loved every moment, especially connecting with all of you.  Thank you SO much for coming along on this fun ride with me!

One Year Ago:  Asparagus and Spring Onion Tart 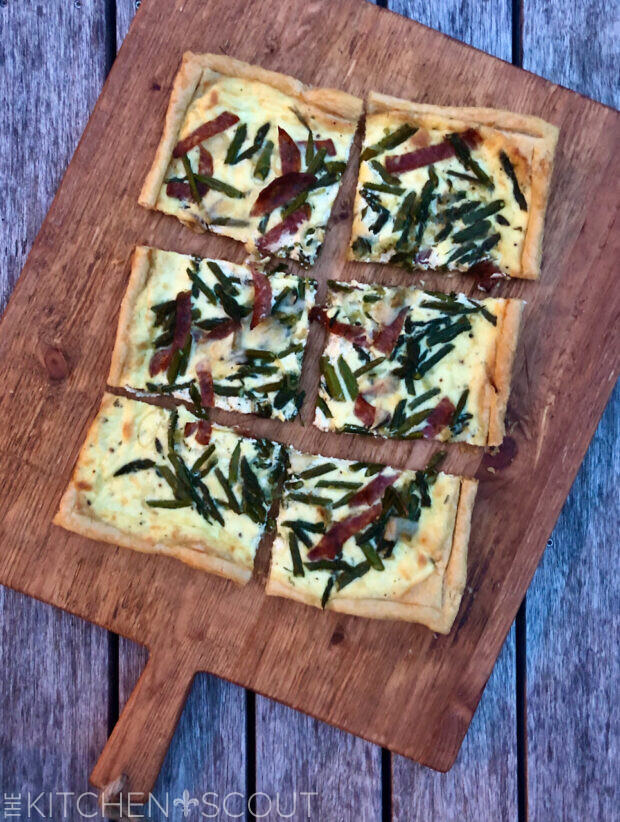 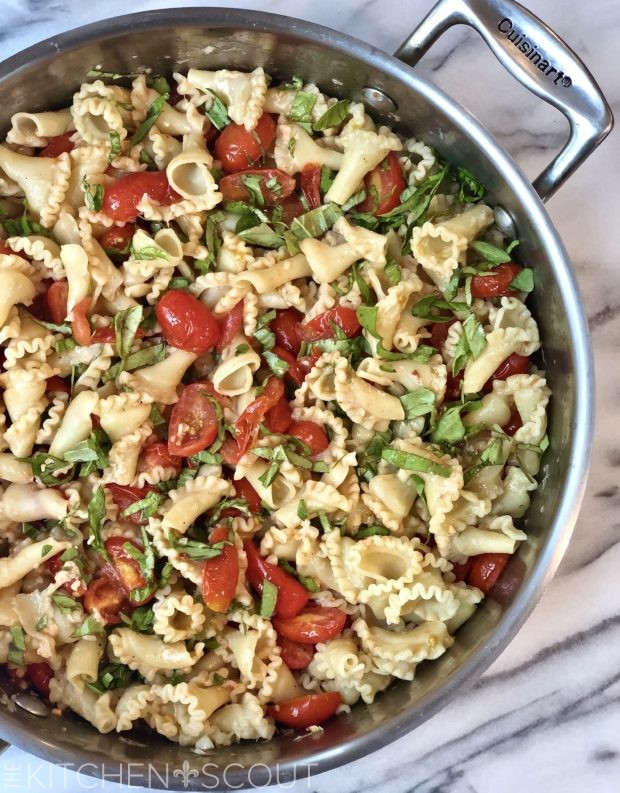 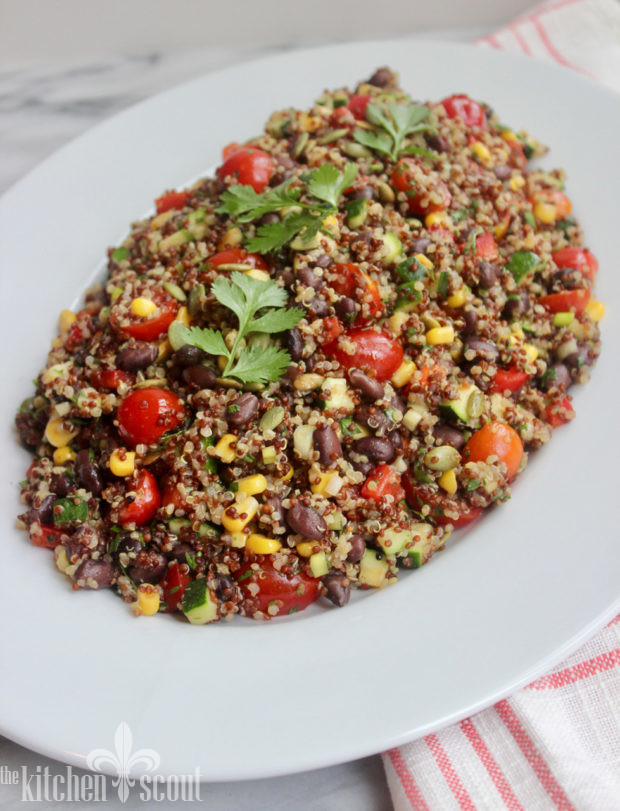 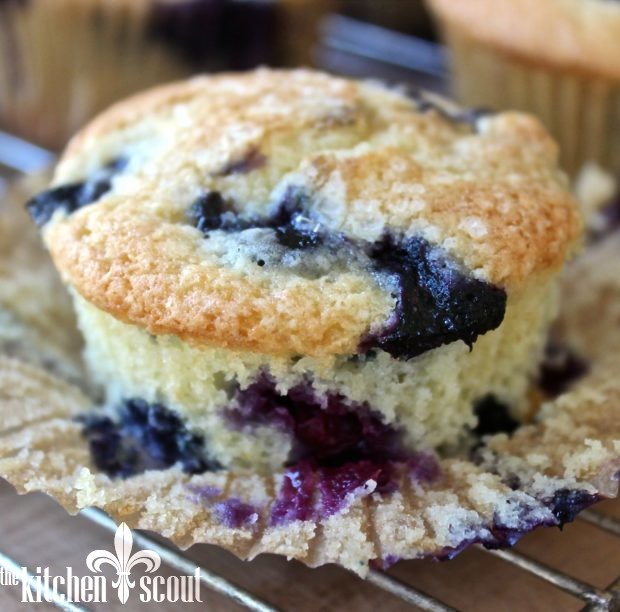 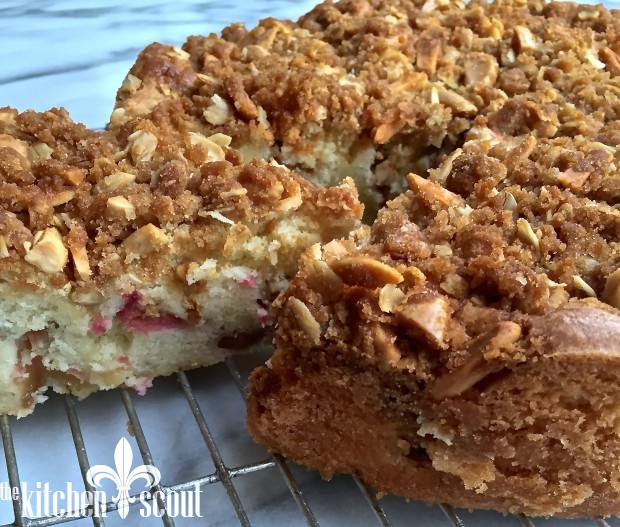 Eight Years Ago:  Jumbo Shrimp with Lemon and Garlic

This recipe comes from Rachel Ray Magazine. I love it's simplicity and its use of radicchio and endive to create an alternative salad/side dish from your traditional greens! If asparagus is out of season or doesn't look great, maybe try some green beans, or even some shaved brussels sprouts that are sautéed would be terrific. If you want, you could add some thinly sliced fennel, or add some shavings of Parmesan or Pecorino at the end. Enjoy!