For every recipe I share with you on the blog, there are probably 5 or so that I test that don’t make the cut.  A couple of weeks ago, I made a pasta dish that I was confident was going to be a winner. Unfortunately, my husband gave it a B+ and I had to agree with him.  It was tasty and it had great eye appeal.  But it wasn’t good enough for all of you!  I only want recipes on my blog that are delicious enough that you’ll want to make them on more than one occasion.  At least that is the goal anyway.

The recipes I test come from all different sources including cookbooks, other blogs, magazines and newspapers.  I do research nearly every day and then try to incorporate the recipes I want to test into my everyday life.  I also experiment with flavor combinations that are inspired by conversations I have with my friends, meals I enjoy in restaurants or at other people’s homes, dishes I see in prepared foods cases at supermarkets and more often than not, ideas that randomly pop into my head at all hours of the day and night.

But I love it.  Except those dirty dishes of course.  Thankfully, the hubs helps me with those when he is home.

Recently, an opportunity presented itself for me to test someone else’s recipes and I took my chance. No thinking or researching involved – just shopping at various area markets to source ingredients. They were for Joanne Chang’s next cookbook that will feature recipes based on the cuisine she serves at her restaurant, Myers & Chang located in Boston’s South End.  If you haven’t been to Myers & Chang, I can highly recommend it for its inspired Asian dishes. Joanne also owns a number of bakery/cafes in the Boston area aptly named Flour.  To learn a little more about Joanne herself, this article that appeared in The Boston Globe last Fall is a great tribute.

In any case, last weekend I tested three recipes and am sharing the pictures of the delicious dishes we enjoyed.  For the recipes, you’ll have to wait for Joanne’s cookbook to be published next year!

Not to leave you in the lurch, I am including a recipe for Spicy Sesame Noodles that I have been making for a long time that has a similar flavor profile to one of the test recipes.  I will tell you more about those Noodles later on in the post.

First up were Peel and Eat Szechuan Shrimp Lettuce Wraps.  Jumbo shrimp and lemon wedges were grilled and tossed with a very spicy marinade filled with all sorts of interesting ingredients.  The shrimp was served in lettuce cups with assorted fresh herbs… 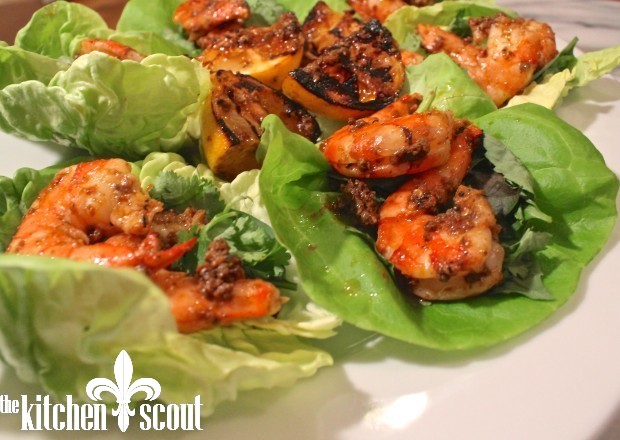 Next up were Vegetarian Taiwanese Dan Dan Noodles.  Shanghai style wheat noodles were tossed with a delicious nut based, spicy sauce and served with a refreshing cucumber salad… 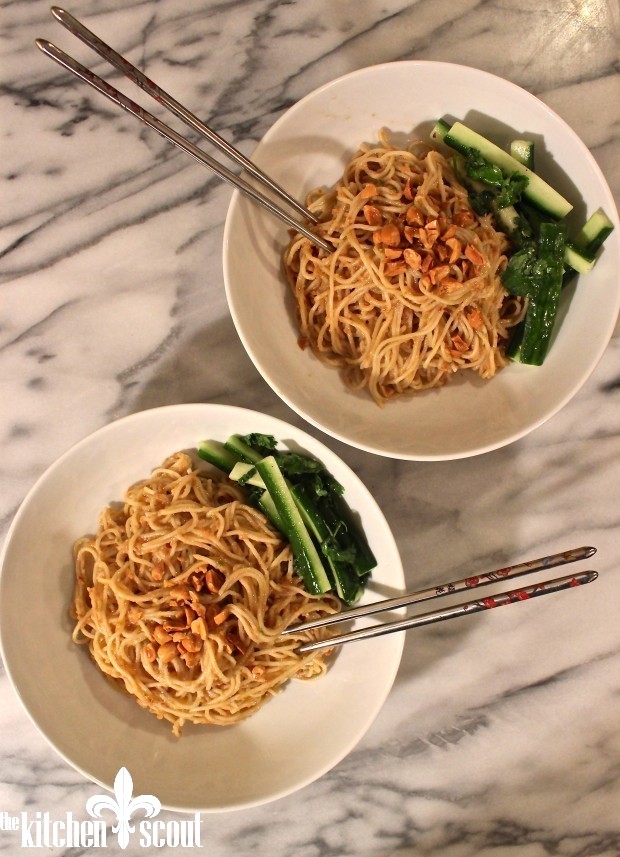 And lastly, Coal Black Chicken Wings, named for their color obviously!  Chicken wings were marinated overnight, baked off and then flash fried before being tossed in the reduced marinade.  Yummy… 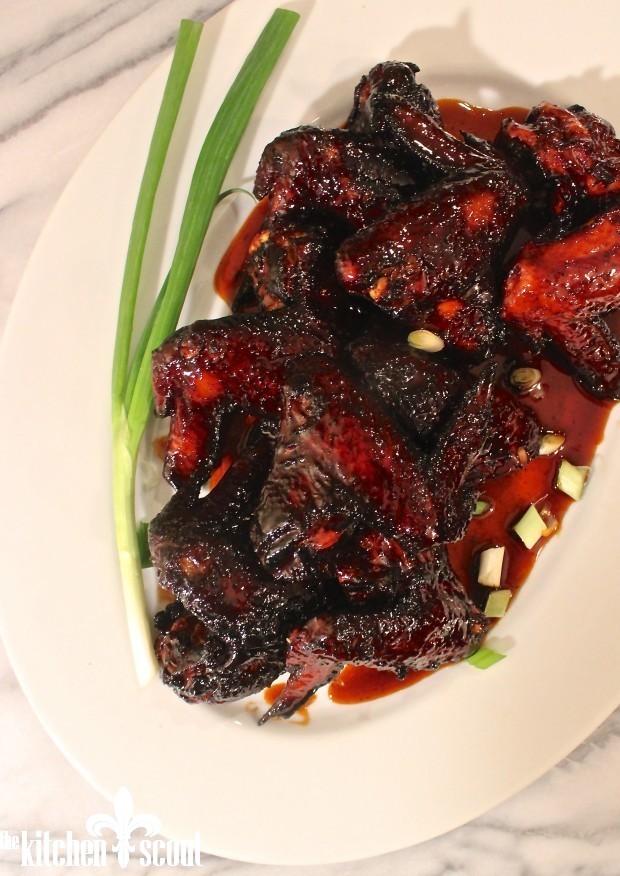 I hope I get a chance to test some more recipes for Joanne.  It was so much fun!

So on to the Spicy Sesame Noodles.  The original recipe for these came from a cookbook my friend, Arlene gave to me for a milestone birthday a few years back.  Well, more than a few years back but who’s counting?  It was one of her favorite cookbooks and this noodle recipe caught my attention.  I have previously shared it with my friends Jane and Dale, both of whom have made it on a couple of occasions with much success. 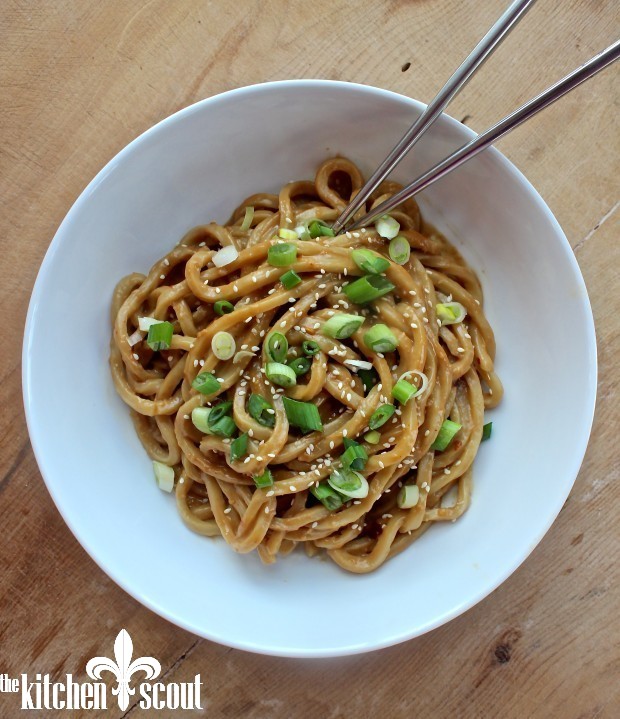 The cookbook is named Tony Clark’s New Blueberry Hill Cookbook which comes from the Blueberry Hill Inn in Goshen, Vermont.  Maybe you have heard of it?

Long noodles are tossed in a sauce made from nut butter, peanut, sesame and chili oils, soy sauce, vinegar, garlic, ginger and red pepper flakes.  The recipe is super easy and the noodles can be served as a side dish or as a bed for grilled chicken, salmon, pork tenderloin or tofu.  The flavor of these noodles only improves as they sit in the fridge.  I like to serve mine freshly made at room temperature, but the original recipe calls for them to be served cold after a 4 hour rest in the fridge.

I used Japanese Udon Noodles when I made the dish this week which you can also substitute for the regular pasta if you want.  You may have a little extra sauce if you do that…. 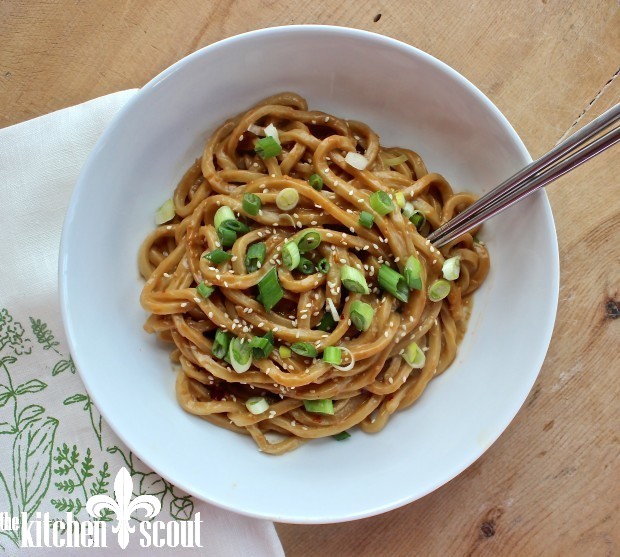 Top the noodles with some chopped scallions and toasted sesame seeds… 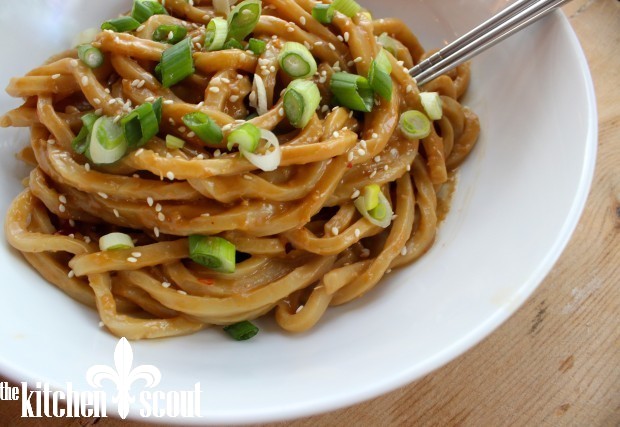 PS – there is a new feature in the comment section that will allow you to be notified when I respond to comments on the blog.  I always do respond but up until now there wasn’t a way of letting you know that I am writing back to you!  Hopefully this new feature works and the blog will be even more interactive.  Test it out!

One Year Ago:  Restaurant Review of La Brasa

These noodles can be served as soon as they are made, but can also be served at room temperature after resting in the fridge for a few hours to let the flavor develop. Great to serve as part of a buffet or as a side dish for almost any protein.

For the Sauce
For the noodles
For the garnish

For the Sauce
For the Noodles