Last Friday’s post about our visit to the South End Open Market was clearly not about Father’s Day. My first Father’s Day post on the blog was fairly emotional so I wanted to lighten things up in the heat of the moment if you will.

I lost my father seventeen years ago this September.  I remember asking myself at the time of his passing, “how am I going to live the rest of my life without you?”.  I was 34 at the time which is not the youngest anyone ever lost a parent, but it felt terribly young to me at the time.

This past Father’s Day was one of the first in those seventeen years when I actually woke up feeling really happy.  Maybe it was from a good night’s sleep.  I choose to think that it came from a different place, one of really happy memories of the very special relationship I had with him.

We were kindred spirits, our birthdays falling nine days apart.  We had a special thing we used to do by interlocking our index fingers and saying each other’s name in a sing-song way.  He called me Sweetie for as long as I can remember, and he always knew when I was trying to get away with something!  He helped me with my math homework and when I called crying from college that I just couldn’t be an Economics major because statistics had nearly killed me, he calmly suggested History and the rest was well, history.  While at college, I would call him a few days a week from a pay phone in our student union, promptly at 10:00 after my first class. We would talk about everything and nothing.  And sometimes on Saturdays when I was home, I would accompany him on his errands just so we could spend some time together.  I couldn’t list all of the little things that made our relationship special…these are just a few.

Yes, I think this past Father’s Day, I chose to look to the positive, rather than fuel the sadness.  To honor him with my menu and to prepare a nice dinner for another great Dad and our family, I made lamb kebabs, the marinade for which I am sharing today.

Why do I honor my Dad with a lamb dish?  Well, we ate quite a bit of it growing up.  We primarily ate rib chops, although my grandmother favored shoulder chops.  On occasion, my mother would get lamb flank from our Armenian butcher, Nish.  It was incredibly delicious, but also terribly messy to make so eventually my mother raised the white flag and said “no more”!

My father’s mother used to make lamb riblets called kavourma.  She lived two streets away from us and she would call over when she had made them and my father would go running! If you have a big carnevore in your house, find some lamb riblets, season them heavily with kosher salt and pepper and bake them in the oven until crispy – they will love you forever.

As a family, we used to frequent a restaurant called Bishop’s that served the best Lebanese food imaginable. One time as a child, I decided to order their double-thick lamb kidney chops for my dinner. My father, who was a most generous man, looked at me with a twinkle in his eye and asked if I was really going to eat them?  I promised him that I absolutely would, no problem.  I was probably 7 and this was the equivalent of four loin lamb chops so my father knew the outcome but let me order them anyway. Of course, I barely finished two and my father had me sign a promissory note on the teensiest piece of paper that I would never, ever order the double-thick lamb chops from Bishop’s again.  He kept it in his wallet forever!

And then there was the time that I invited my father over to dinner at my apartment in Boston that had a kitchen next to an interior wall.  I decided to cook lamb chops of course.  I cooked them at a high heat and due to a lack of proper ventilation, the smoke alarm started going off.  My father, a dapper dresser who rarely was without a coat and tie, grabbed a broom and started waving it at the smoke alarm while the two of us were laughing hysterically.  Somehow the lamb survived and to this day, if I ever set off a smoke detector, I grab a broom and think of him.

And lastly, when we had our daughter’s christening party, we served lamb kebabs for dinner.  As Armenians, we traditionally season our lamb with onions and a olive oil-acid type marinade.  But, I had come across a great marinade from my friend Bredt that used Dijon mustard and soy.  My father was helping my husband with the grilling and I can still remember the look he gave me when I handed him the platter of kebabs that were painted with dijon mustard!  It was the look of “what the heck is on this lamb?”!!!  It was delicious nonetheless.

The marinade I am sharing today is a mash up of the many, many marinades I have used over the years. The most important part of making tender, juicy lamb kebabs is to choose the proper cut of meat.  I travel to Watertown to purchase my meat from The Meat Spot and always ask for “lamb shish” because then I get the top round section of the lamb leg, the best part for kebab.  I spent some time speaking with owner, Dikran who had just cut my meat and he suggested that while you can use the entire leg for kebab, the top and bottom round sections are best.  The shank tends to have more tendons so can be tougher/fattier.  You don’t have to travel to Watertown to get the best lamb, but if you do order from a butcher, ask for top round and you will not be disappointed.  And if you go to The Meat Spot, please tell them I sent you!

My lamb, onion and red pepper chunks marinating in a combination of olive oil, fresh lemon juice, garlic, dried herbs and other seasonings… 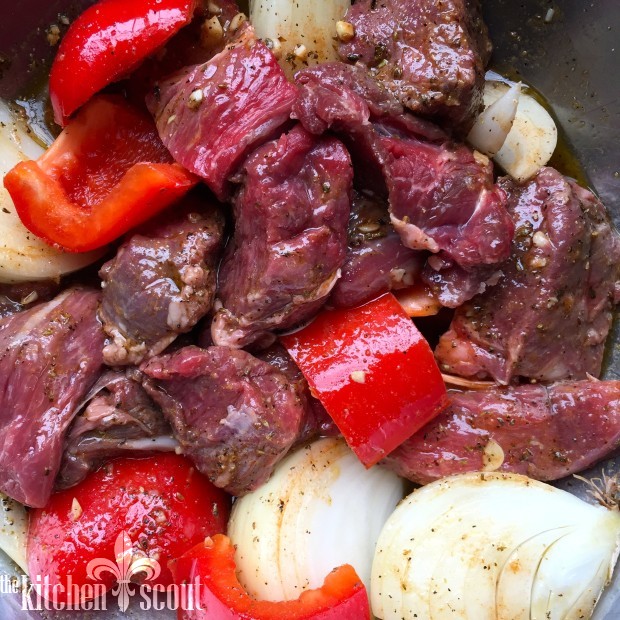 A traditional dish to serve with kebab is Armenian Rice Pilaf, but I wanted to lighten up the menu a bit so I served a Cucumber and Tomato Salad… 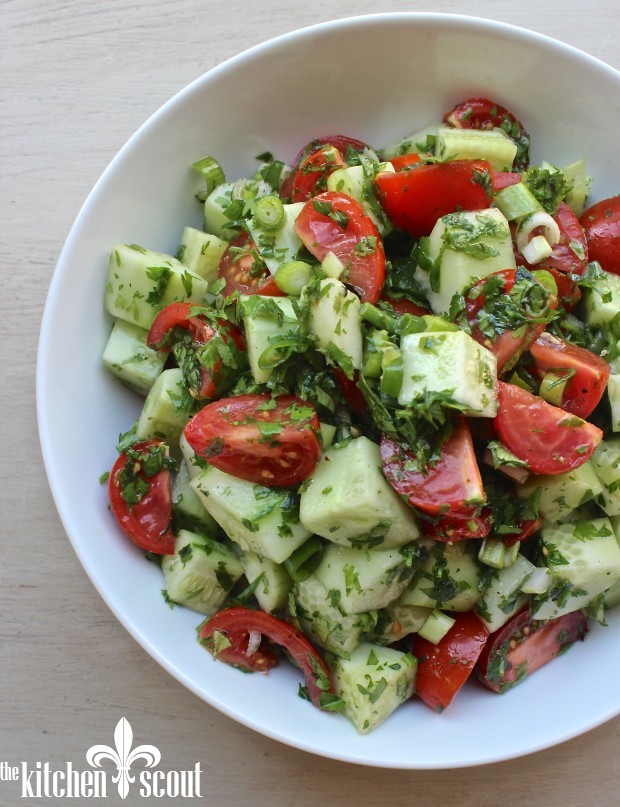 Hummus, grilled pocketless pita bread that I also found at The Meat Spot and some sheep’s milk Feta drizzled with olive oil and za’atar completed the meal.  Tzatziki would go nicely as well.  Simple, rustic, casual.. 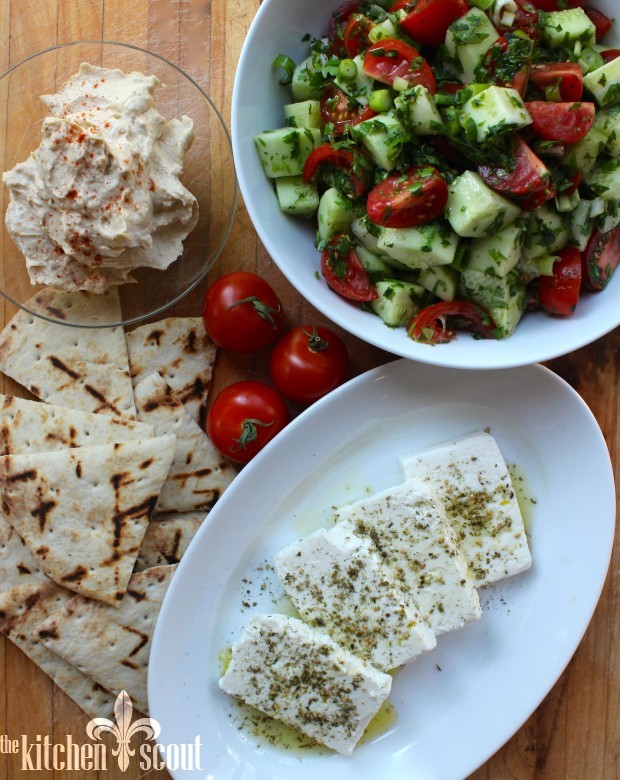 And then the lamb with the veggies…

And on their own… 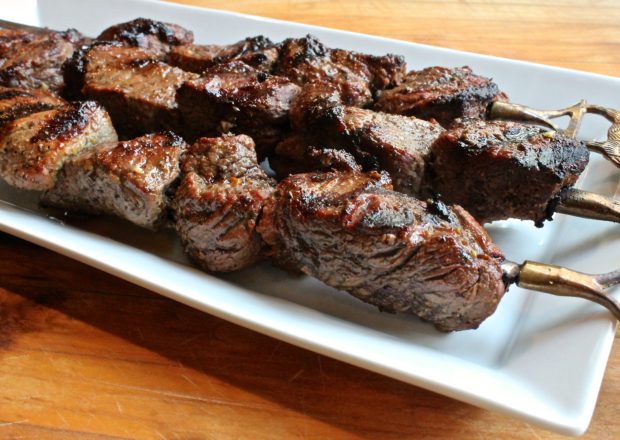 The lamb is delicious served leftover in sandwiches or sliced on top of a salad.  I hope you find an occasion to make this soon and as always, please let me know what you think in the comments below!

One Year Ago:  Peach & Blueberry Crumble with Quinoa Oat Topping

4
South End Open Market at SOWA
Spotlight on Your Pictures!