To celebrate the beginning of Spring, I went to camp last week!

Well, not really camp, but Cousin Camp.  This is what my first cousins, Jean and Joyce and I have decided to call the few days we set aside each year to spend together.  You might remember meeting these women a couple of times on the blog here and here.

The tradition of “camp” started a few summers ago.  J&J invited me to join them for their annual sister getaway weekend at Jean’s summer house in Virginia.  I had just been through a very rough patch and although I am technically the oldest of the three of us, I was the baby of the group that weekend.  The girls took such good care of me and I was in tears when we parted, returning home to face reality.

As first cousins, Jean, Joyce and I have spent countless holidays and birthdays together.  We also attended “real” summer camp together in our youth.  Spending the summer at Waukeela Camp for Girls, located in the White Mountains of New Hampshire was a family tradition started by my mother (their aunt and Godmother) who was a camper and later a tennis counselor.  The girls and I represented our generation as campers and later, Jean and I were both counselors.  Joyce’s daughter and my two daughters have all been to Waukeela as well.

When together, the three of us talk about camp as if it were yesterday and we consistently sing at least parts of the many songs that punctuate most Waukeela days.  So, when we were together last week for our third annual gathering, I suggested we come up with a name for our getaway, with alliteration if possible for easy recall.  Joyce suggested Cousin Camp and it was settled.

The rules of Cousin Camp are quite simple.  Come as you are, no uniforms required.  A bugle will not wake you up, but whoever is up first must start the coffee.  There isn’t a swim test, but time at a beach or pool is mandatory.  Shopping is optional but encouraged. Cocktails will end the day, followed by dinner. This time around, we also decided that we would spend limited time in the kitchen so it would really feel like a vacation!

We decided to try out Uber to take us to our dining destinations, figuring there was strength in numbers. I am not completely sold on the service, but let me tell you, we had some of the funniest conversations with our Uber drivers!  One gentleman was originally from Israel but grew up in Los Angeles.  Within minutes of being in his car, we not only changed our dinner plans, but we also had lunch plans for the next day at his sister’s cafe (both were good suggestions).  Uber driver as foodie consultant!  One of our drivers was a young man originally from Russia who encouraged us to go clubbing (we refused) and one was from Watertown, Massachusetts of all places.  Of course, we had to mention we were Armenian to which he responded, “Lamejun”!

So, the inspiration for this week’s Fish Tacos actually came from our very first “Cousin Camp” meal.  We were pretty hungry when we got off the plane and decided to try a place near where we were staying. Fish Tacos were on the menu, appealing to all of us.  Here is a picture of the inspiration dish… 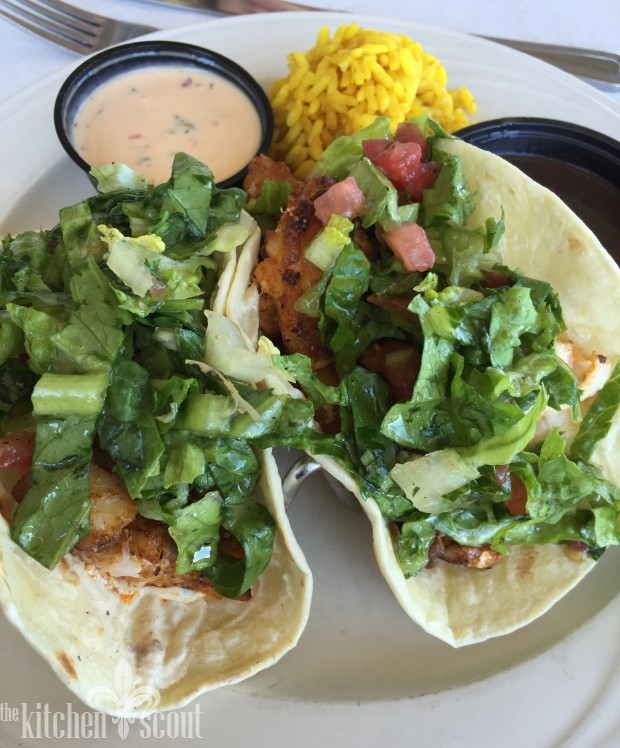 Two blackened fish tacos were served with romaine, tomatoes and a chili-cilantro crema on the side. Side dishes were rice and black beans.

I wanted to make them for my husband so I started researching blackened seasoning mixes and discussing options with Joyce who is also a private chef.

In the end, I consulted an old cookbook written by Sally Sampson called the Fifty Dollar Dinner Party Cookbook (26 dinner parties that won’t break your bank, your back or your schedule).  It’s a great cookbook, filled with complete menus for six people.  She had a recipe for spice-rubbed catfish that looked close to what I wanted. I tweaked her seasoning mix just slightly, changing the amount of garlic powder and adding onion powder which appears in a lot of blackened mixes.

I made the dish a couple of times, once for our dinner, and once for the blog which resulted in lunch for me!  I think I am fish-taco’d out for now!  I made the dish with both tilapia and cod.  Both work or you can use mahi-mahi or halibut.  Just make sure it is a firm fish that will hold up to the cooking and then break up into nice chunks for the tacos.

Also, this past week I discovered the website www.seafoodwatch.org.  Maybe you already know about it, but it is a helpful tool to research the fish you are being offered in your local supermarket and whether or not it is recommended for consumption.  They also have a free App that you can download from the iTunes store.

Fish Tacos come together very quickly, making them a perfect weeknight option.  The recipe is easily doubled for larger groups. 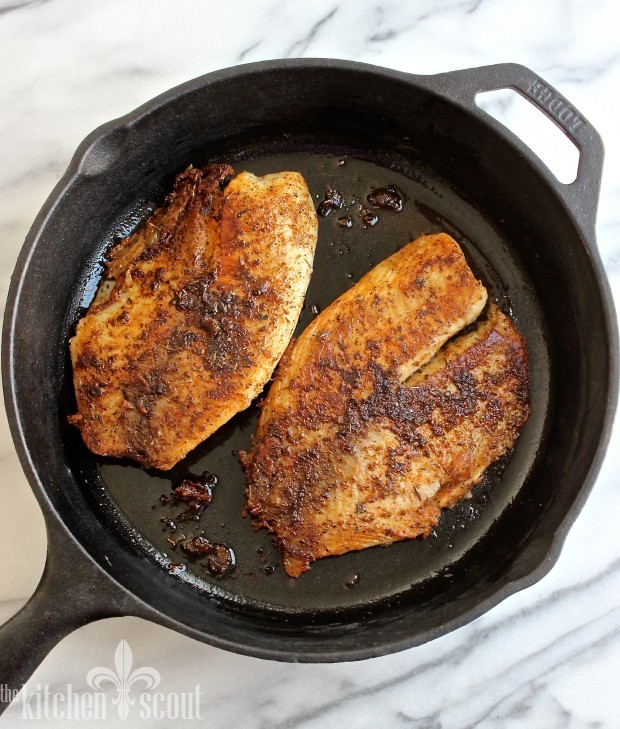 First, put together a spice mix consisting of dried oregano, cayenne pepper, garlic and onion powders, dried thyme, paprika, kosher salt and black pepper.  Sprinkle the mixture on both sides of the fish.  After chilling for an hour in the fridge, the fish is pan fried in just a little bit of oil until cooked through.  You will probably have a little leftover spice mix to use on a future occasion. 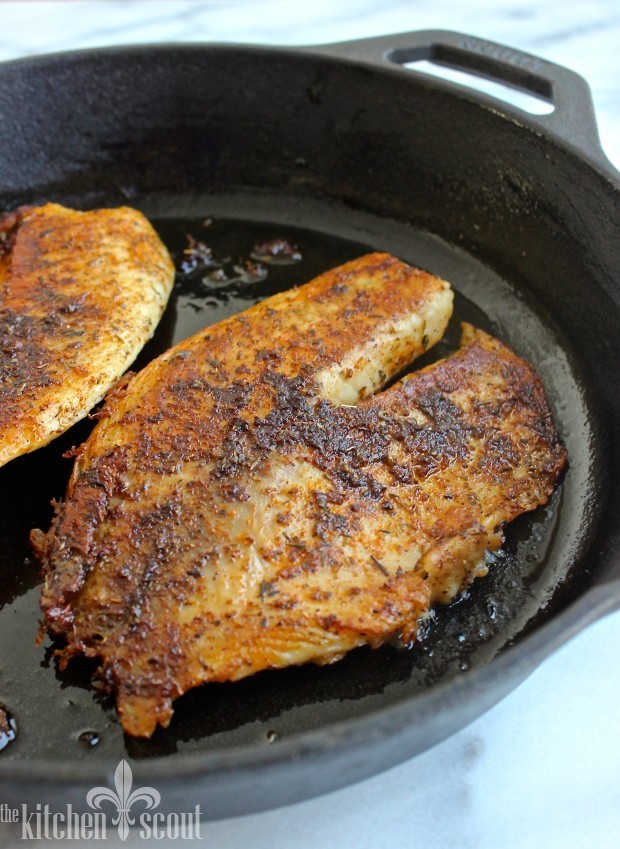 The mix is spicy so if you have a more sensitive palate, you might want to cut back on the cayenne pepper the first time you try it.  I’ve written that suggestion into the recipe. 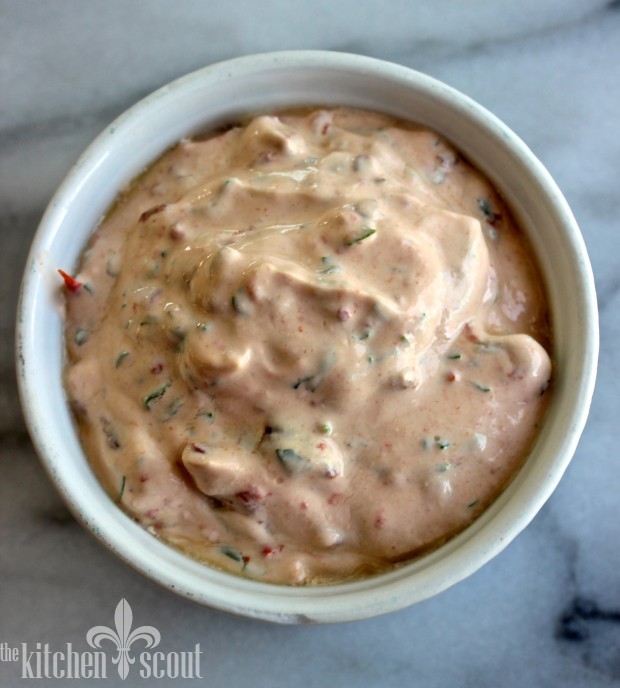 Next up is the Chipotle Lime Crema.  Mix together some sour cream (or Greek yogurt), chipotle peppers in adobo, cilantro and the juice of a lime.  In the recipe, I’ve given suggestions on how to tone down the spice in this as well if you choose. 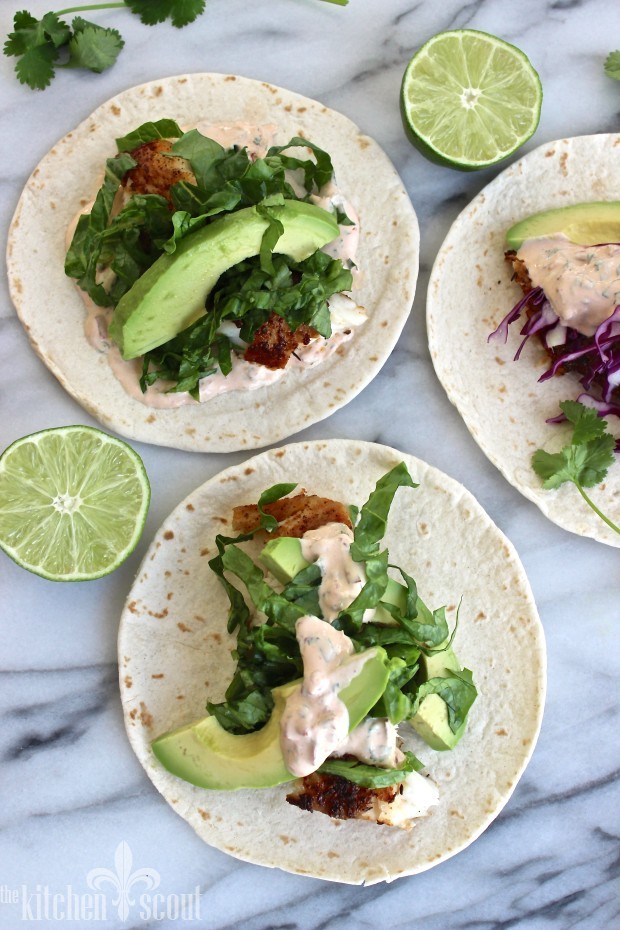 Assemble your tacos, after you’ve briefly warmed your tortillas in a dry skillet!  I am not going to tell you how you have to layer your taco.  You could start with the crema, add the fish and then some avocado and romaine (the restaurant had lightly dressed theirs, but I kept mine plain).  Or you could start with the fish, add some red cabbage, the avocado and then the crema… 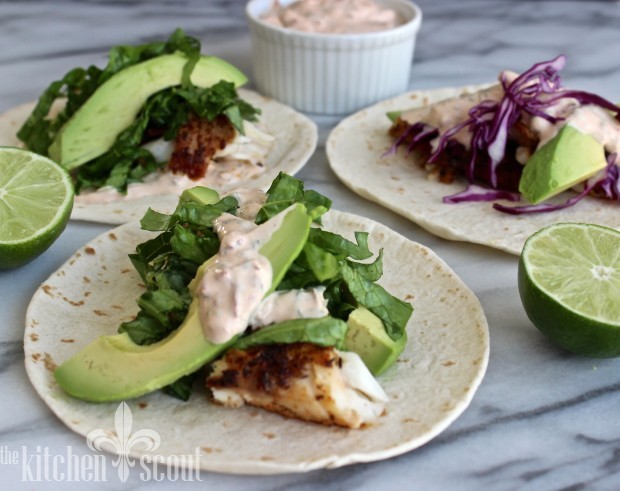 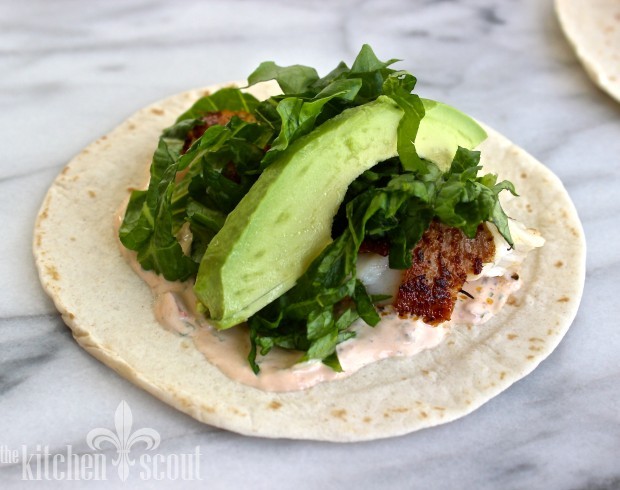 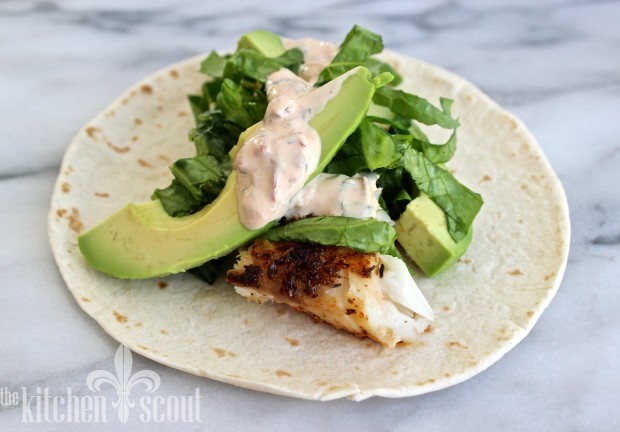 Below is a shot of the Fish Taco Salad I made for lunch on photo day.  The salad version was just as delicious and a little less messy to eat!  The crema becomes the salad dressing if you will.  So much flavor! 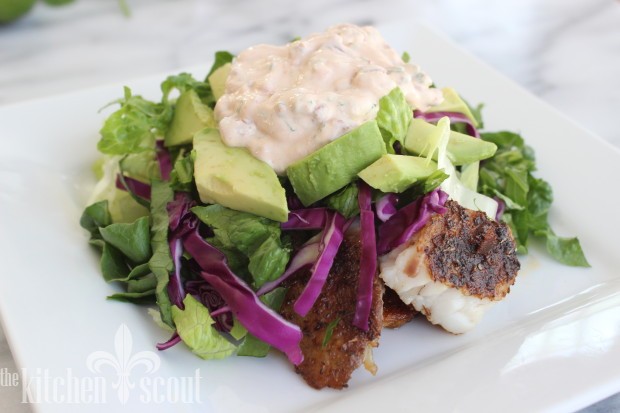 What are some of your getaway traditions with friends or family?  Please let me know in the comments!

Yield: 8 tacos for about 4 average appetites

For the Blackened Seasoning:
For the fish:
For the Chipotle Lime Crema
For the tacos