Winter in Boston and its suburbs has been nothing short of brutal.   I have lost track of the inches of snow that have fallen and the number of school days lost by my teenager. Like for many, it’s treacherous to exit my driveway due to enormous and unavoidable snowbanks that flank either end of its entrance and limit visibility into our narrowed street.

Affected by this weather have been numbers of commuters who rely on public transportation and, from what I am reading online, many restaurants and their employees. It’s really hard to want to venture out in the sub zero temperatures in pursuit of a meal, only to have to freeze all the way home.  However, I do want to encourage you all to go out to eat – somewhere – anywhere – to support the restaurant industry and its employees during this time of unusual weather.  Go to the Restaurants tab on my website and see where I’ve been lately to get some ideas!

A few Thursdays ago when we had light flurries during the day and frigid temperatures at night, I had scheduled to meet some friends, an hour’s drive away, near the ocean for dinner at Short & Main!  Wait, what?  My three dining companions lived relatively nearby and would have understood if I had cancelled, my sweatpants calling.  But as the day progressed, I said to myself, “just go” and I am so glad I did!

Short & Main is the second restaurant from couple Nico Monday and Amelia O’Reilly who also own seasonal spot, The Market Restaurant that I reviewed here on the blog last Fall. You can read more about that visit here.

Nico and Amelia opened Short & Main in 2013 with the concept of raw bar meets wood-fired pizzas.  It’s not a menu that immediately makes sense with the exception that it fits all seasons and can rely on locally sourced ingredients year round.  Nico is passionate about cooking in wood ovens which he shared with Amelia during their time living in California when they both worked at Chez Panisse.  Short & Main was a natural second venture for the couple and I can say that it’s the type of place I wish I had nearby to my house.  Joining them are Matthew Cawley and Howie Correa who serve as host and beverage consultant.

Joining me at Short & Main were my friends Susan who you met here and here, Anne and Mimi.  Fun fact – Mimi and I were in the same class in high school and reconnected at a milestone reunion a few years ago.  She lives on the North Shore and is mutual friends with Susan and Anne.

Located on Main Street in Gloucester, Massachusetts (at the intersection of Short Street – get it?), Short & Main is warm and inviting.  There is ample seating for about 55, including a chefs’ bar in front of the wood ovens, a main dining room and a porch area that I can imagine with its windows opened to the street below during the warm summer months. Within the main dining area is a welcoming bar that seats about 12.

The open kitchen with chefs’ bar. 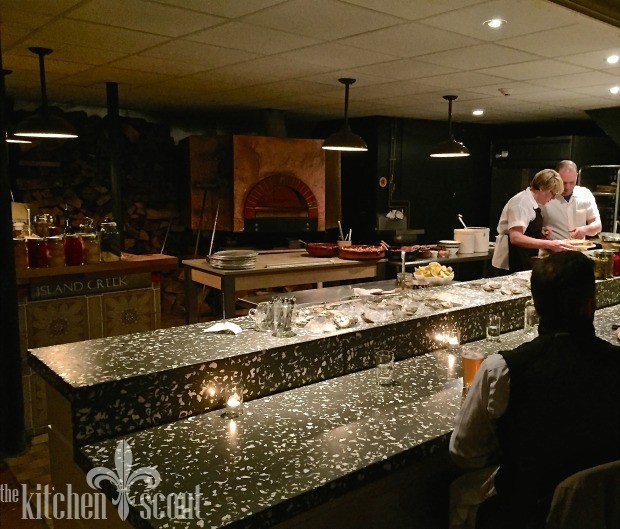 One view of the bar area… 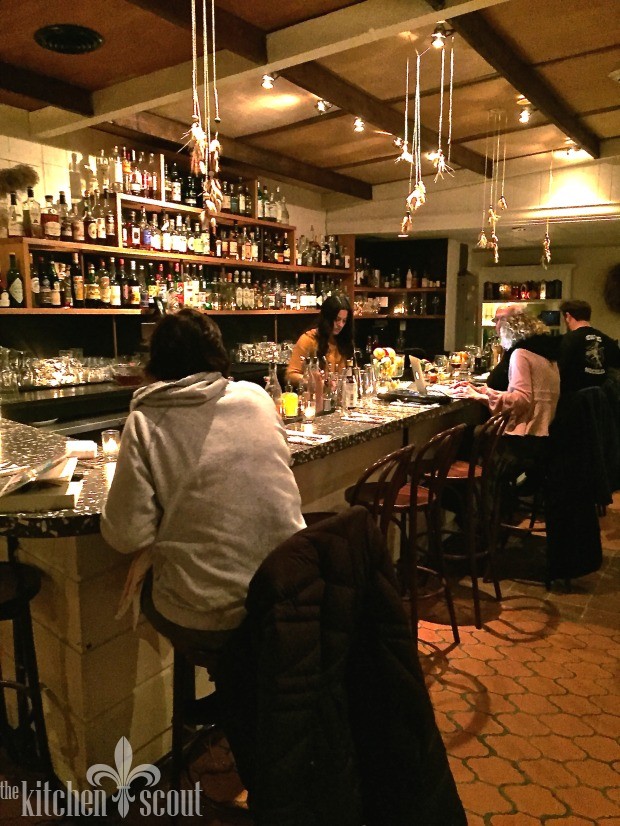 and from the other direction.  Doesn’t it look like an inviting place to meet some friends? 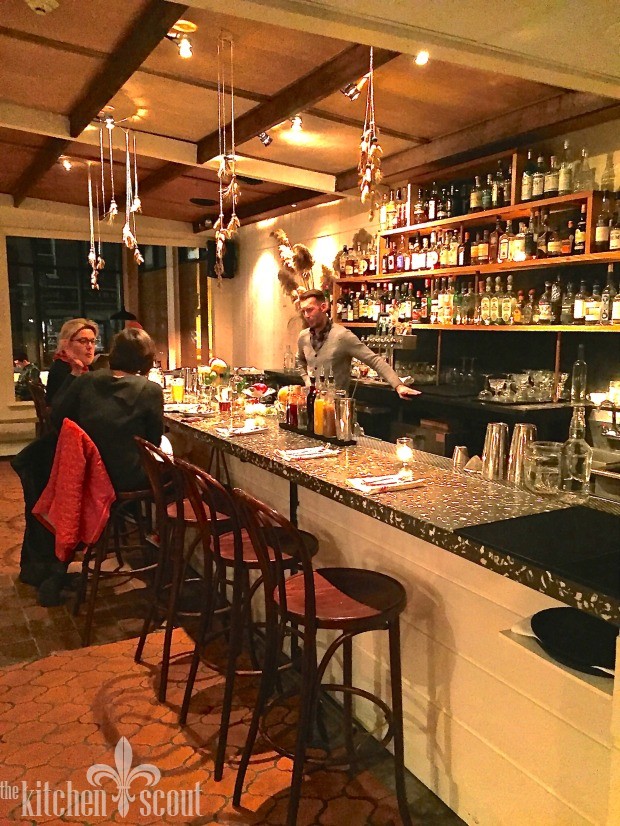 I was a little late arriving, but quickly ordered myself a few oysters to begin.  All the oysters on Short & Main’s menu were from Massachusetts and I chose Island Creek.  Served with the traditional cocktail and mignonette sauces, the oysters were fresh and briny.  I love starting my meal with something light like this as it really wakes up the palate. 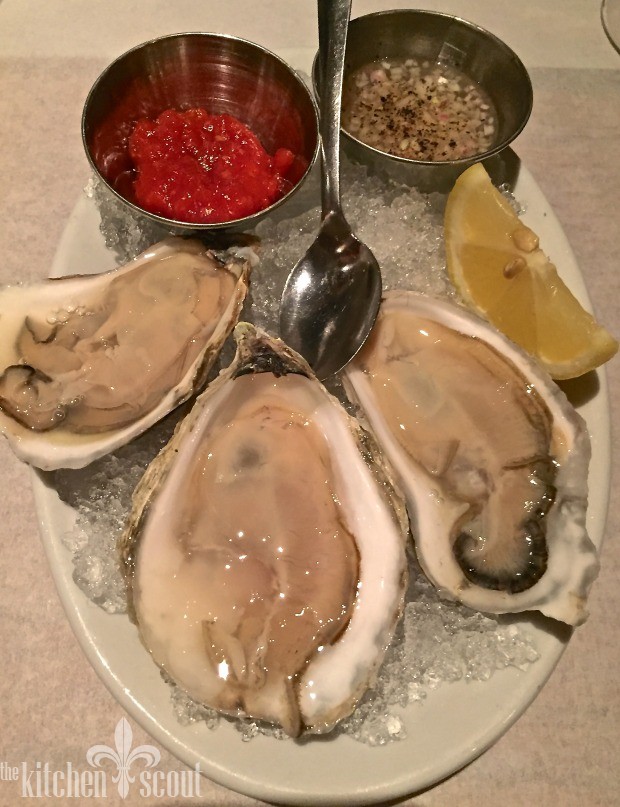 Short & Main’s menu changes daily and in addition to the Raw Bar offers Antipasto, Salads, Plates of the Day and of course, Pizza.  We tried to order something from each section with the exception of the plate of the day. 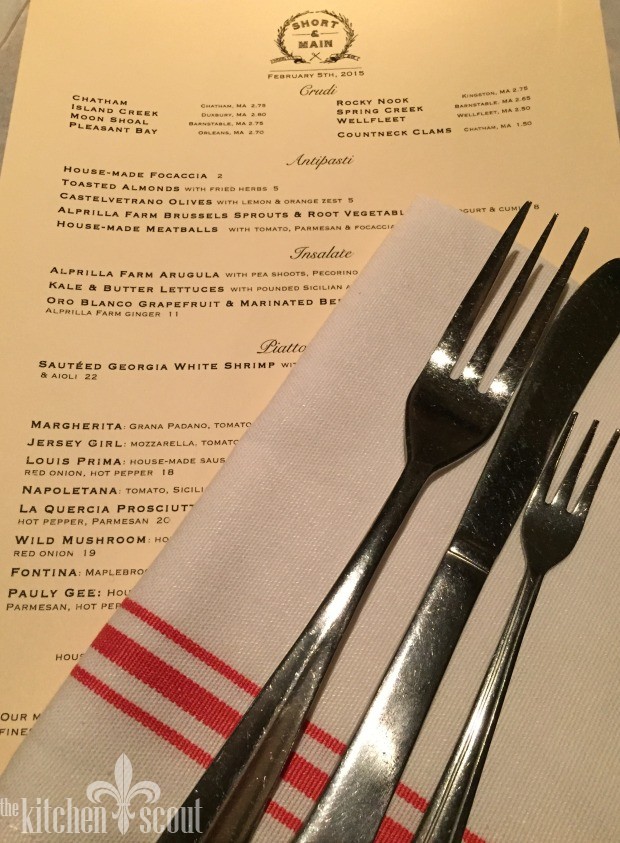 To begin, we shared a Brussels Sprouts and Root Vegetable Antipasto.  Parsnips, carrots, celery root and brussels sprouts from Alprilla Farm in nearby Essex are roasted with earthy cumin and topped off with house made yogurt.  It was a hearty dish that we all enjoyed.  The yogurt really was a nice addition that I will definitely try at home.

Next up, we ordered two of the three salads.  First, a Grapefruit and Marinated Beet Salad that included fennel, avocado and ginger.  There is nothing better in the winter than a citrus salad and this one hit all the notes.  Beautiful to look at and incredibly flavorful… 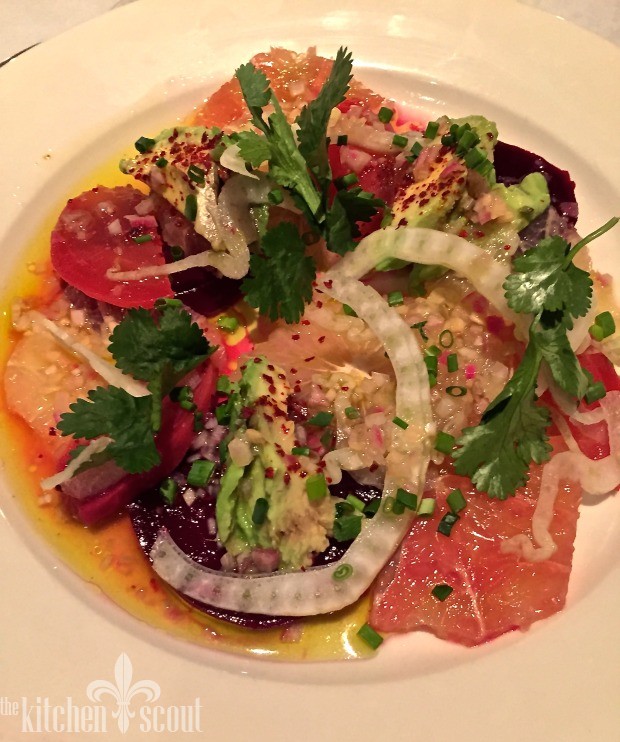 We also ordered the Arugula salad with pea shoots, pecorino and toasted pinenuts which was straightforward enough, but the dressing was outstanding.  Both salads were perfectly seasoned and had just the right amount of dressing.  Salads done correctly are a lot of work and I am so appreciative when someone makes one for me! 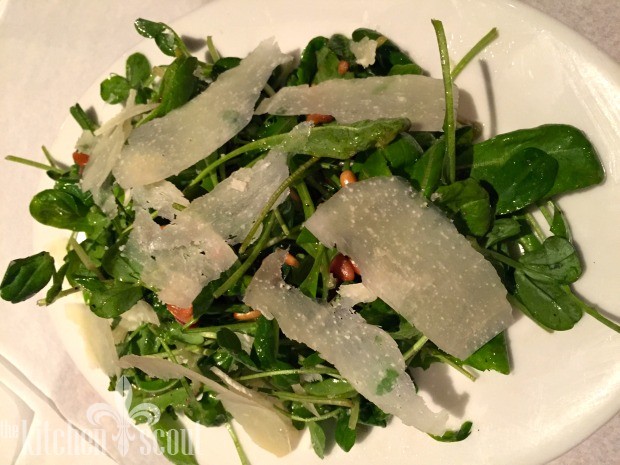 So let’s talk pizza.  First of all, I absolutely love pizza and I particularly love one with a thin crust.  Baking it in a wood oven is definitely a plus.  Pizza tastes especially wonderful when you haven’t had it in awhile, which was the case when I visited Short & Main.  (Side story – one of the first loans I ever made as a banker was to Bertucci’s of brick oven pizza fame, when they were a small company owned by Joey Crugnale and ahead of its IPO.  Very fun due diligence!)

Short & Main offered a variety of pizzas, all of which appealed but we settled on the Napoletana first… 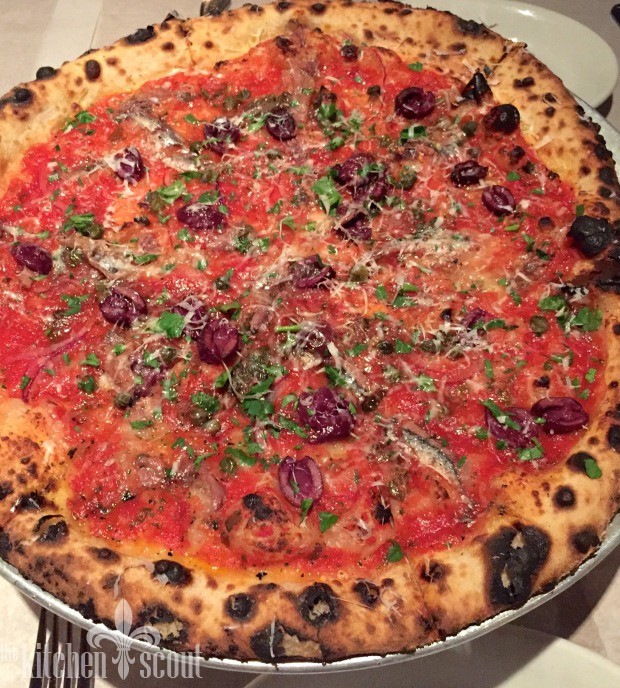 A traditional sauce is topped with anchovy, capers, black olives, red onion, hot pepper and pecorino.  Think Puttanesca on a pizza crust.  This pizza was tasty, but it was very salty which is not a complete surprise given the ingredients.  We had asked that the anchovies be left off the pizza but as you can see they were not.  Oh well.  We still devoured it, but it isn’t one I would gravitate to again…

Next up was the Pauly Gee… 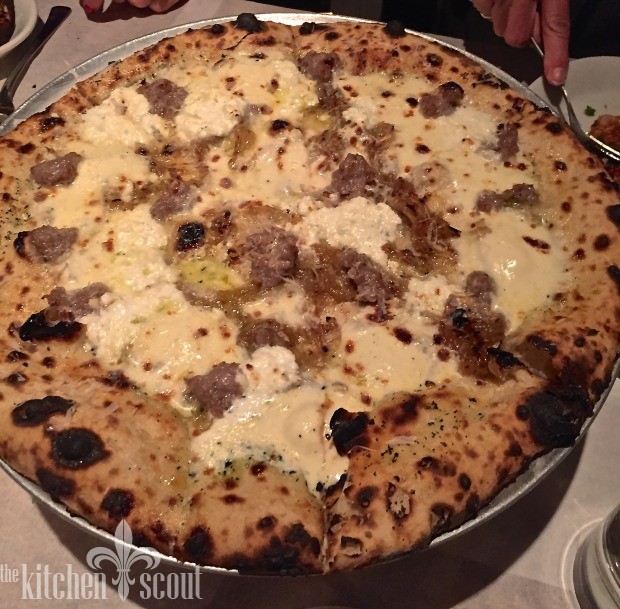 House made sausage, caramelized onions, ricotta, mozzarella, parmesan and hot pepper come together to form an ultra decadent pizza.  This pizza was fabulous and it was an excellent contrast to the Napoletana.  One of my local pizzerias underseasons its pizza and it drives me crazy so it was delightful to have this pizza that was spot on.

For dessert, the restaurant offered us a complimentary dessert which was a grapefruit olive oil cake with a citrus sorbet.  It was also delicious and just a bite was all we needed after all the pizza…

Service was excellent and food was delivered promptly and in well spaced intervals.  Prices seemed reasonable.  Wine list was not extensive but had something for everyone.

In addition to the seating and bar downstairs, Short & Main offers a space upstairs called the Bird’s Eye which is open on the weekends, often with live entertainment and other events on Friday nights.  “Pop-up” Sunday suppers by The Market Restaurant are held through May 17, 2015 on Sunday evenings (reservations requested).  If you visit Short & Main’s Facebook page, they are very good at updating it with all the upcoming events so you can plan ahead.  If you are just interested in dinner, they are open every evening except for Wednesdays, first come first served.

I really love the concept of this restaurant.  A place you can go have a thoughtfully prepared meal with local ingredients that is casual and classy at the same time.  I can just picture the place really hopping in the summer months when Gloucester comes alive with increased visits from beach goers and tourists.  Between The Market Restaurant and Short & Main, Nico and Amelia have a significant presence in the town and I for one am looking forward to seeing what they might do next!