My friend, Susan recently asked me to join her for dinner at a relatively new place in her neck of the woods on the North Shore of Boston. She had been hearing good things about it, including its Chef, Chris Tighe’s first place win at a local competition to benefit non-profit, Beverly Bootstraps.

We were overdue for a catch up so I was more than eager to make the hour’s trip.  Susan and I used to work together and she married one of my best buddies, Kevin from college. We could have fun anywhere and we laugh a lot when we are together. 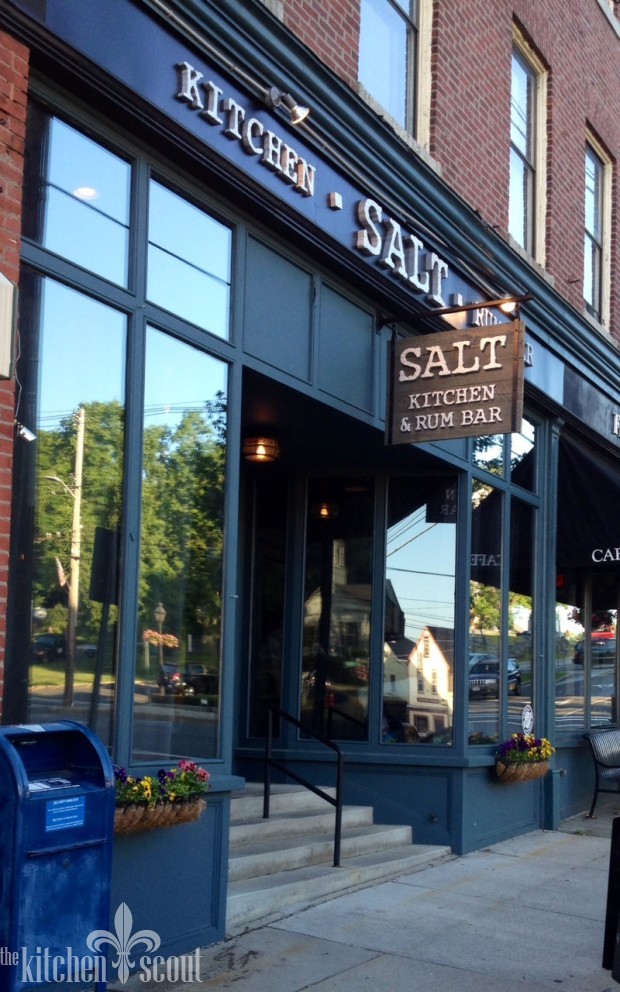 Located in the center of quaint Ipswich, Massachusetts, Salt Kitchen & Rum Bar was opened in February of 2013 by owner, Dave Gillis who was the longtime General Manager of Finz Seafood & Grill on Pickering Wharf in nearby Salem.

Gillis wanted to create a gastropub focused on “elevated comfort food” and featuring locally sourced ingredients.  Salt also features craft beers and hand crafted cocktails showcasing about 30 rums, including the locally distilled Privateer, Old Ipswich from Turkey Shore Distilleries, and Bully Boy.  Sidenote – the manufacture of rum was once Colonial New England’s largest and most prosperous industry, and is alive and well today thanks to these newer distilleries.

The restaurant is small and seats 49, including about 14 seats at the bar which has two large TV screens.  The bar was quiet the night we were there, but I imagine the intimate space could get a little noisy if it were full. The space’s decor is pretty simple, gray walls with reclaimed barnwood below the chair rail, tiled floors and two large chalkboards where, with colorful chalk, daily specials and a list of the craft brews and rum cocktails are listed.

Our server was very nice and attentive, delivering good service despite seeming a little less than enthusiastic.

She did help us select our cocktails which we figured we should try since we were in a “rum bar” after all!

Susan ordered a Kapowski which was a blend of Bully Boy rum, strawberry puree, cucumber and lime.  She was very happy with it! 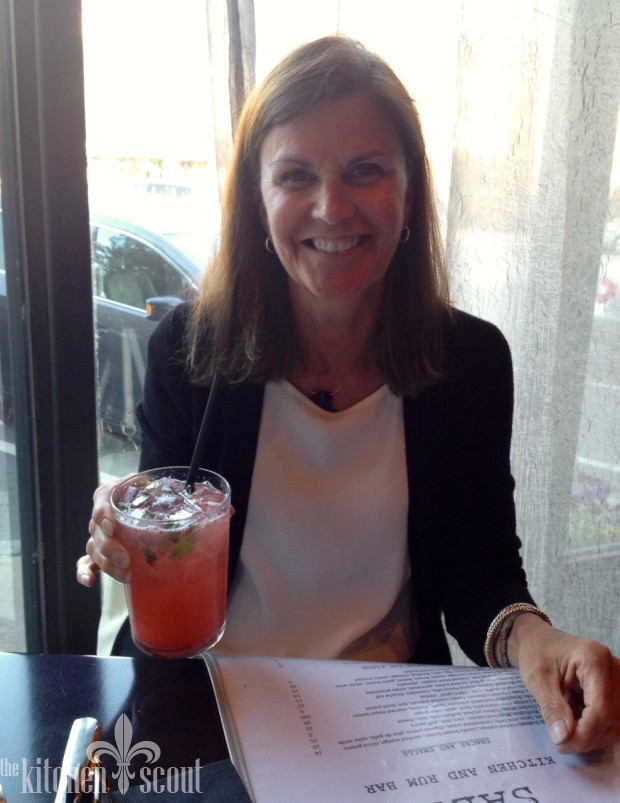 My choice was the Mutineer, a blend of Privateer Silver, Blood Orange Puree, Mint and Lime.  It was delicious and refreshing! 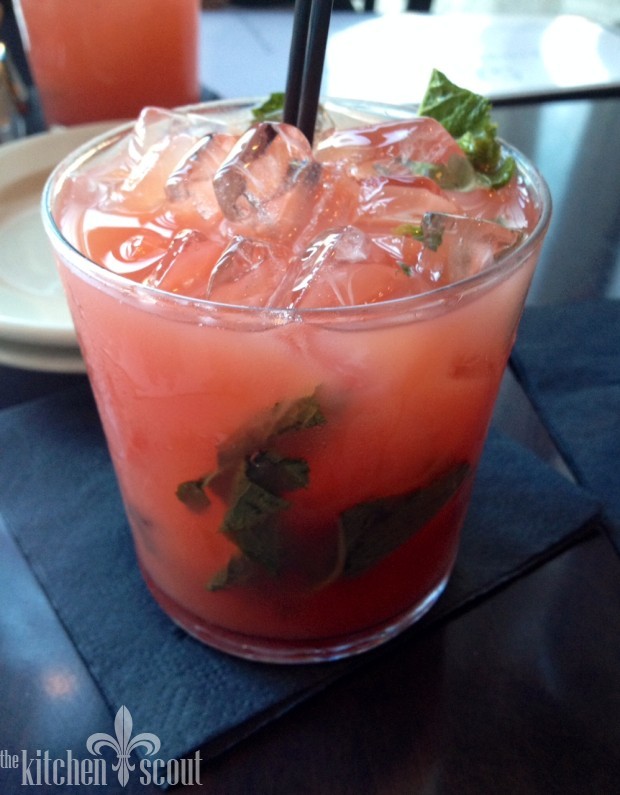 The menu has a large appetizer section filled with a variety of classic and contemporary comfort style foods such as Lobster Wellington Bites, Pork Tacos and even Crabbies (yes, English muffins with a crab and cheese spread).  “From the Field” (salads and soups), “Mains” such as Fried Chicken & Waffles and Meatloaf, and “Between Bread” covering everything from burgers to fish sandwiches complete Salt’s extensive menu.

I have to admit that all of the appetizers on the regular menu looked tempting.  We ordered the Deviled Scotch Egg, but they were out of it so we settled on two appetizers from the daily specials.

First up were lamb meatballs that were combined with orzo, roasted grapes, some crumbled sausage and feta.  The meatballs were perfectly seasoned and incredibly flavorful. All of the elements in this dish worked really well together.  There were about eight meatballs in the serving so it was more than generous. 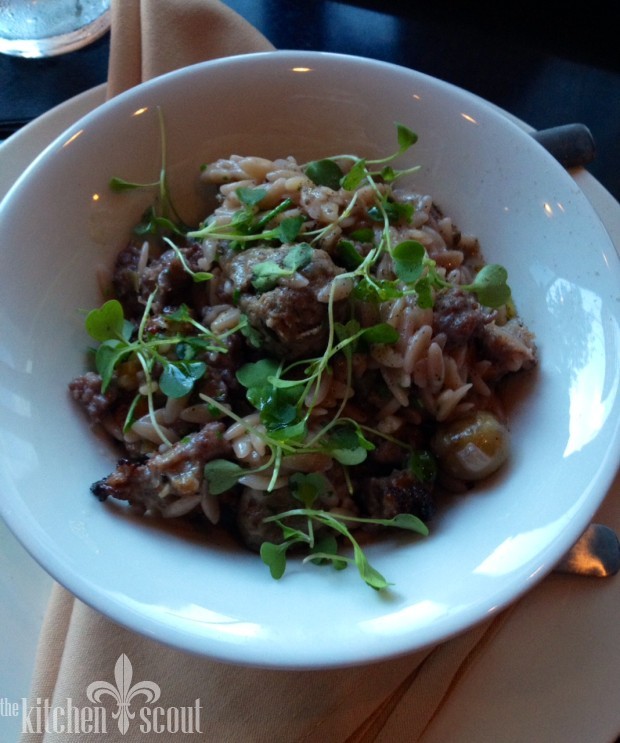 We also shared an appetizer that was a Chicken Confit Crostini served with sliced turnips, green beans and a creamy herb vinaigrette.  The chicken was moist and melted in your mouth.  Offset by the crisp vegetables and crostini and the delicious vinaigrette, this may have been my favorite dish of the night.  And there were two crostini in the serving so very easy to share. 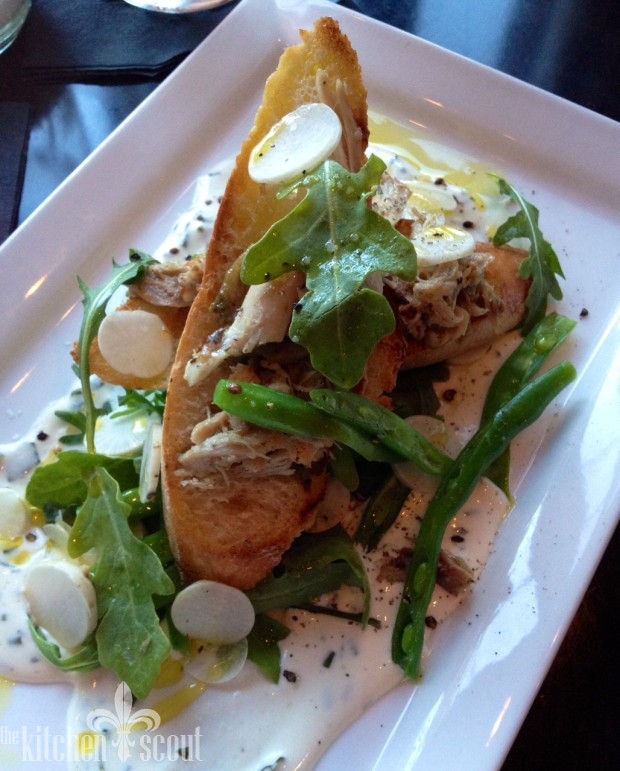 For dinner, we decided to share the Barley Risotto and the “Lobster Reuben”.

The Barley Risotto was a huge disappointment.  It lacked flavor and have no textural resemblance to a risotto.  As I reread the ingredients for my blog post, the description says that it was supposed to have mascarpone cheese and I suspect it was left out of the dish as it was dry as a bone.  We were having too much fun to really care or comment – we just didn’t finish it.

The Lobster Reuben, by contrast, was delicious.  Moist and well seasoned lobster meat was served on rye bread with 1000 Island dressing, some crunchy homemade red cabbage slaw and brie.  It was a rich sandwich and a great combination of crunchy and creamy.  The fries were crispy and salty so we had no problem finishing those off.

So, why is the restaurants named Salt?  Well, it’s a nod to the phrase “Salt of the Earth”, the type of people and food we’d all ideally like to be surrounded by.  The restaurant also uses a variety of salts in its cooking and offers some gourmet samplings alongside bread and olive oil.  Fun!

Susan and I really enjoyed our time at Salt Kitchen & Rum Bar.  While I live pretty far away and can’t make it a regular haunt, I do think the place fills a great niche for the North Shore community and can keep building on a good thing.

I hope to return sometime soon, sample some items from the appetizer menu, try the chicken & waffles and enjoy another Mutineer with my husband. Maybe an outing to Crane’s Beach is in our near future!