A few months ago, my friend Amy C. asked if I could explore some recipes for the blog that were suitable for the slow cooker.  Slow cooker recipes had definitely been on my radar, but I only had one or two that I use with any regularity.  It has taken me a bit to create the dish I am sharing with you today, but I think you will enjoy it and am thinking it might be something to serve this weekend during the big game.

I purchased my first slow cooker at Costco when we first started playing paddle tennis.  The slow cooker is the perfect vehicle for transporting a one pot meal such as my Turkey & White Bean Chili, Chicken Parmesan Meatballs or Beef & Butternut Squash Stew to the hut for a warm dinner after a few sets of chilly paddle. My slow cooker wasn’t particularly fancy, but it owed me nothing when it finally bit the dust last winter.  I might add that its demise was only because one of the handles started to crack (don’t ask).  I have since replaced that slow cooker and this is the one I have now.  Again, nothing fancy but a workhorse that is large and performing well in the kitchen and on the road so far.

Here are my thoughts about using a slow cooker.  The recipes cooked in them are meant to be pretty simple, right?  Simple as in let’s layer all our ingredients in the pot, turn it on and say “bye-bye” until the house smells divine and the meal is just about ready to eat.

I find it funny that some slow cooker recipes ask us to sear the meat we are using first in another pan on the stovetop, and/or to cook down our onions and garlic and do all sorts of exercises before everything then gets dumped into the slow cooker.  Suddenly, I have more pans to wash and that kind of defeats the purpose of the slow cooker doesn’t it?  If I am in the mood for a slow cooker meal, I probably am not in the mood to mess up lots of pans in the process.  I know, I know, there’s flavor in searing the meat first, etc and so on.  But this is how I feel.  And of course, you won’t be surprised that this prompted me to look up the history of the slow cooker for some backup.  Here is what I found.  Good trivia!

In the 1940’s, Irving Naxon received a patent for a device he named the Naxon Beanery. The appliance was inspired by stories from his mother about a bean-based stew called Cholent that she used to make in her bakery in her native Lithuania.  Cholent, a traditional Jewish stew would be placed in the bakery’s ovens at the end of the day on a Friday, the start of the Sabbath.  The stew would be left to cook in residual heat for the entire day on Saturday and by the end of services in the evening, the cholent would be ready to eat.

Naxon sold his patent in the early 1970’s to Rival Manufacturing which branded the appliance the “Crock Pot”.  Sales were targeted towards working mothers who could fill the appliance with raw ingredients in the morning and come home to a “home cooked” meal in the evening.  The Crock Pot was copied by many other companies from Hamilton Beach to All-Clad and generically named the slow cooker.  What is always a slow cooker, is not necessarily a Crock Pot!  In any case, while the slow cooker’s popularity has waned a bit over the decades since, it seems to be stronger than ever now.

This recipe is the New York Time’s slow cooker version of Cholent that, surprise, does not require searing the short ribs first.

Slow Cooker Turkey Ragu with Penne was inspired by a couple of dishes that I make using my Le Creuset cast iron pots and a low oven which yields results similar to the slow cooker.

My recipe uses turkey thighs instead of some heavier cuts of beef or pork to make a lighter ragu that is tossed with some cooked penne pasta, parmesan cheese and herbs for a one pot meal.  The recipe will feed a small army, or two smaller crowds if you freeze half of the sauce for a future meal.  It is a comforting dish that I have road tested on lots of friends, including two recipe testers whose families gave it a thumbs up!

Start with some chopped onions, carrots and garlic.  Place them in the slow cooker with some kosher salt and pepper… 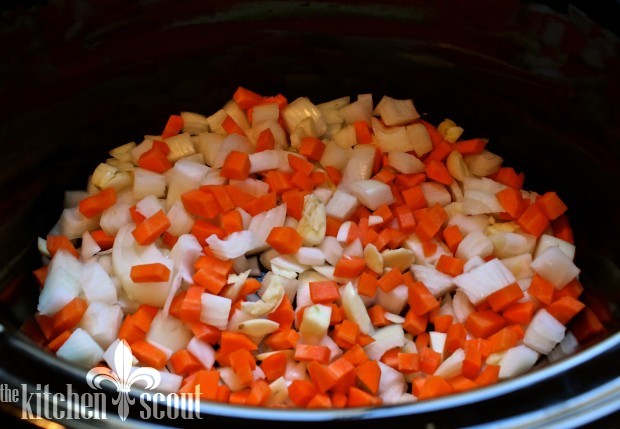 Next, add your turkey thighs.  I have only found bone-in, skin-on turkey thighs in the market and my recipe calls for removing the skin first.  You can ask your butcher to do this for you if you want and if you happen to find boneless, skinless thighs, all the better (but I don’t think they package them as such).  Would I substitute with chicken?  I don’t think it will give you as much flavor to be honest, but it might be worth a try.  In any case, poultry needs a lot of seasoning so sprinkle both sides with salt and pepper and place on top of the vegetables… 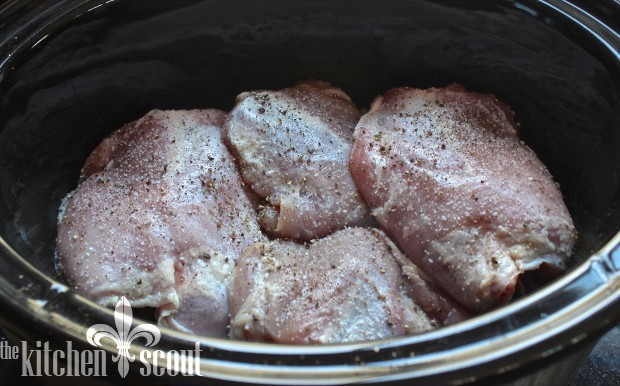 Next, add a can of crushed tomatoes, some chicken stock, a splash of white wine for good measure, fresh rosemary, thyme and bay leaf, crushed red pepper flakes and if you have one, a piece of Parmesan cheese rind (some stores now sells these).  The rind imparts a nice flavor to the dish and is completely edible… 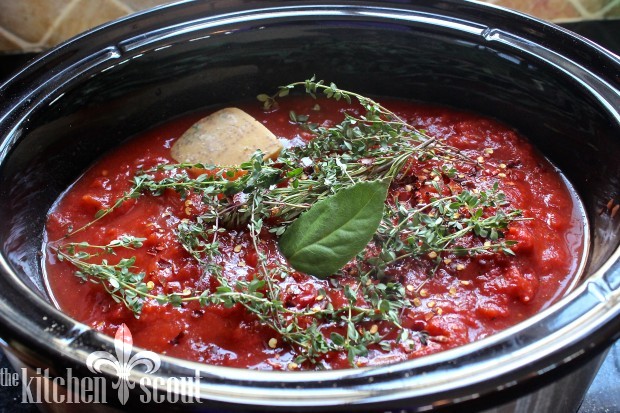 Put the lid on, turn the slow cooker on low and walk away.  It’s almost imperative that you leave your house for a few hours while your slow cooker is working, just so you can return and be greeted by the delicious smells that will await you.  Six hours later, you’ll have something like this… 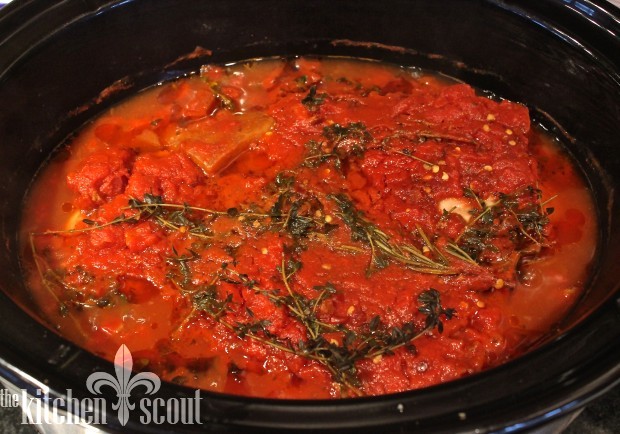 Now is the part of the dish that requires just a teensy bit of work.  The thighs will be falling off the bone which you will discard along with the herbs.  The remaining meat is quickly shredded using two forks and put back into the slow cooker with the sauce.  A couple of tablespoons of balsamic vinegar are added to brighten up the flavors… 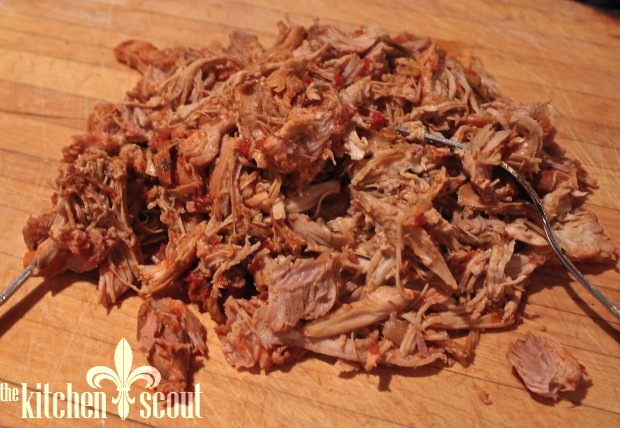 At this point in the recipe, you could take half of the sauce, cool it completely and freeze it for a future meal.

Otherwise, keep the slow cooker on warm while you cook off a pound of penne pasta that you will add to the sauce with some olive oil and lots of Parmesan cheese… 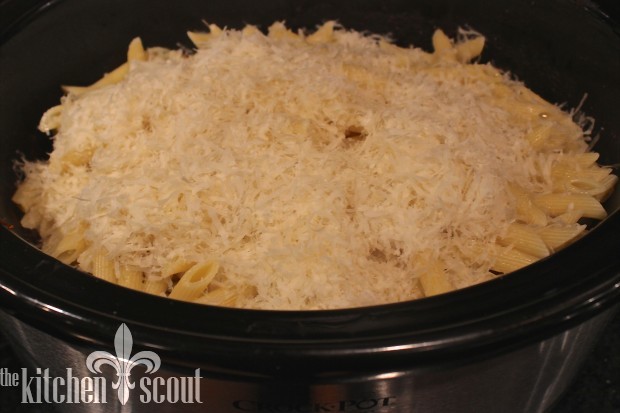 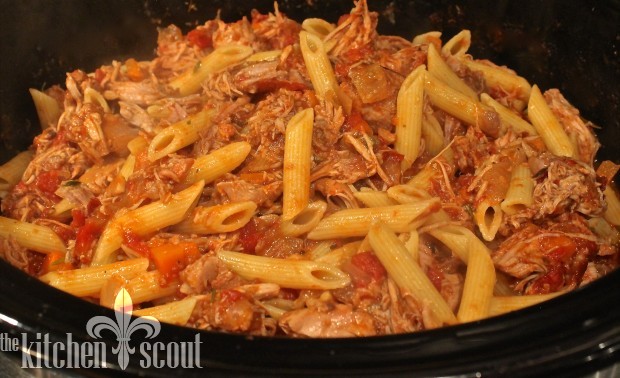 Add some freshly chopped parsley and season to taste.  Serve with lots of extra parmesan cheese on the side… 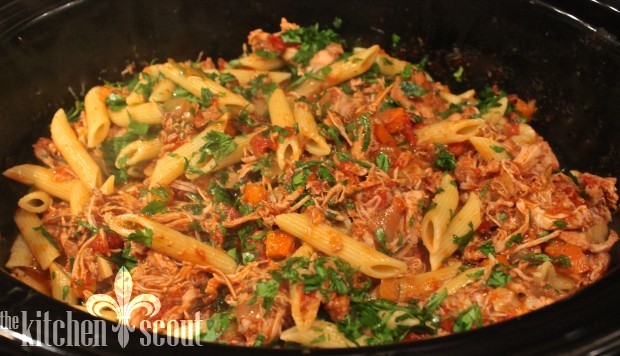 Sit back and enjoy… 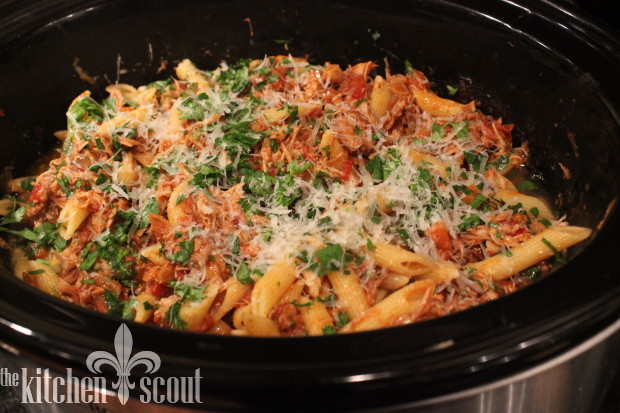 Your guests will think you were in the kitchen for hours… 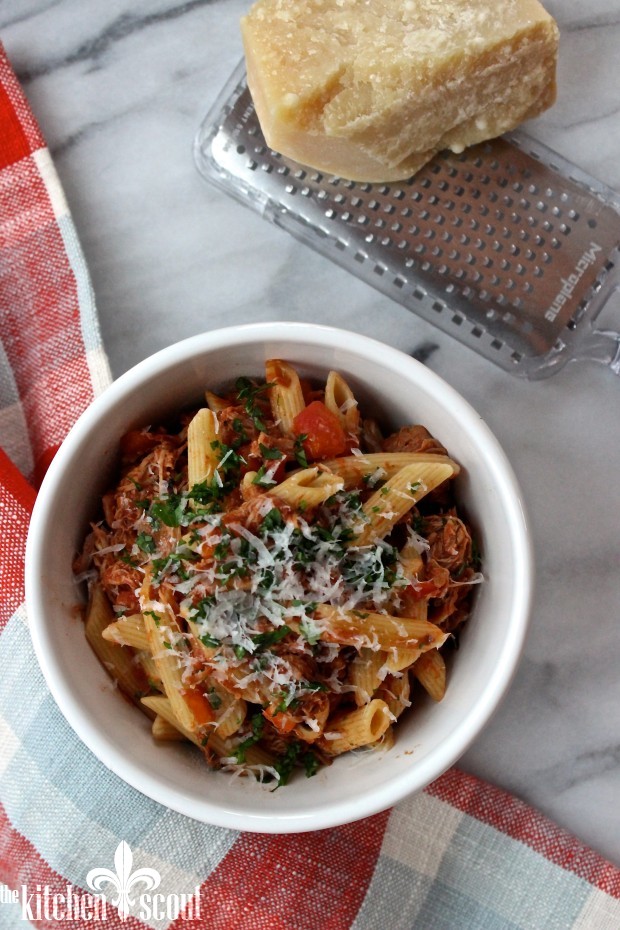 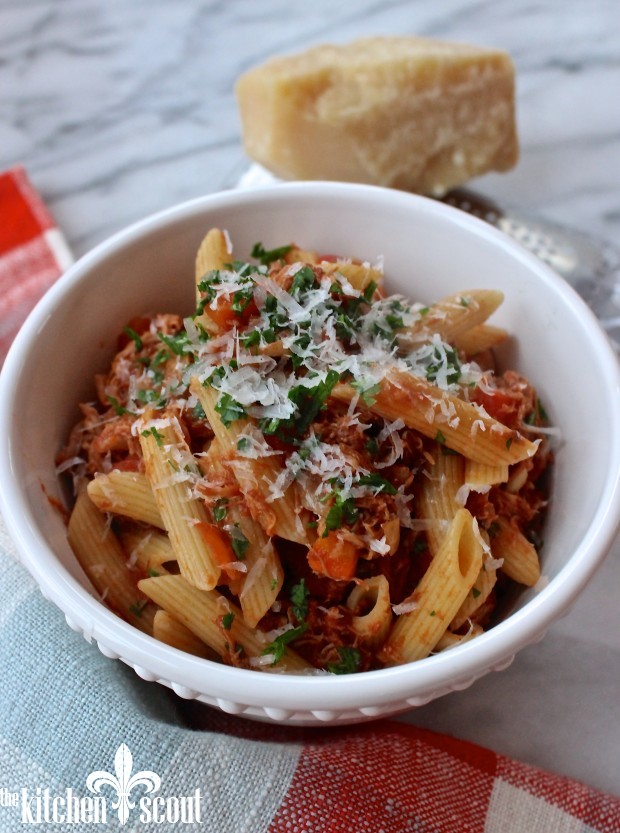 What are your favorite slow cooker recipes?  I’d love to hear from you so please let me know in the comments!

Two Years Ago:  Chicken with Red and Yellow Peppers

Turkey thighs are braised with the help of a slow cooker to yield a hearty and lightened up traditional ragu that can be served with pasta or even over a serving of polenta if you prefer. The recipe makes enough to serve a small army and you can easily freeze a portion of the sauce for future meals.

For the Ragu
For finishing:

At this point in the preparation, you can take half of the sauce, cool it down completely and freeze for a future meal as the recipe makes enough to serve 8 people. If you do that, you should only cook 1/2 pound of pasta and cut the "finishing ingredients" in half when completing the remainder of the recipe.