Does anyone remember the line in the HBO classic, “Sex and the City” when Charlotte, seated at the infamous coffee shop table the ladies frequented for brunch, says the line, “My hair hurts”?  Although she says this in response to her never ending quest to finding prince charming, it’s something I am sure each one of us can relate to from time to time.

Here is the link to the clip on you tube for your viewing pleasure.

The reason I bring this up is that I have been helping a friend with a project for the past several months.  I have no qualifications for my “job”, other than the fact that I am a loyal friend, and was told I had some relevant skills.  Ha!  It has been a lot of work so needless to say, MY hair hurts.  It’s such a great way to say that you are so tired that even the part of your body that has no feeling, somehow is torturing you!  I have been cooking a little less than usual too as a result.

But, as Shakespeare wrote, “the lady doth protest too much, methinks”.  The truth of the matter is I love to be busy and challenged and frantic and excited and part of something bigger than me.  It’s why I say yes to some of the things I have found myself doing over the years.  It’s why my hair often hurts.

This week, I am sharing with you a recipe that I have developed in pretty quick time.  Do you like falafel?  I happen to love falafel and have made it on several occasions.  The only recipe I will use is from Yotam Ottolenghi and Sami Tamimi’s book, Jerusalem.  It’s possible you can find it online, but it is a fairly straightforward recipe and the results are always scrumptious.  Dry chickpeas are soaked overnight and then pulsed with onions, fresh herbs and lots of spices.  The mixture is formed into balls (or patties as I prefer), coated in some sesame seeds and shallow fried in oil. Served with a tahini sauce, alongside a fresh salad or stuffed into pita bread with more of the same, they are a vegetarian dream. 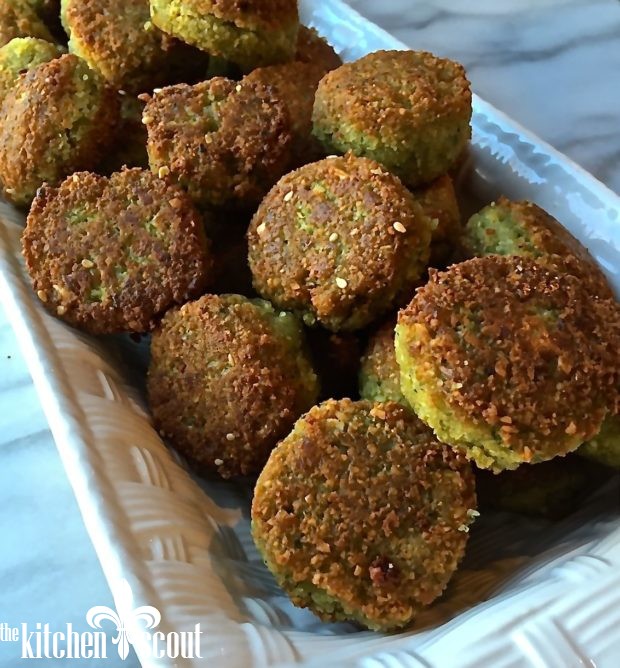 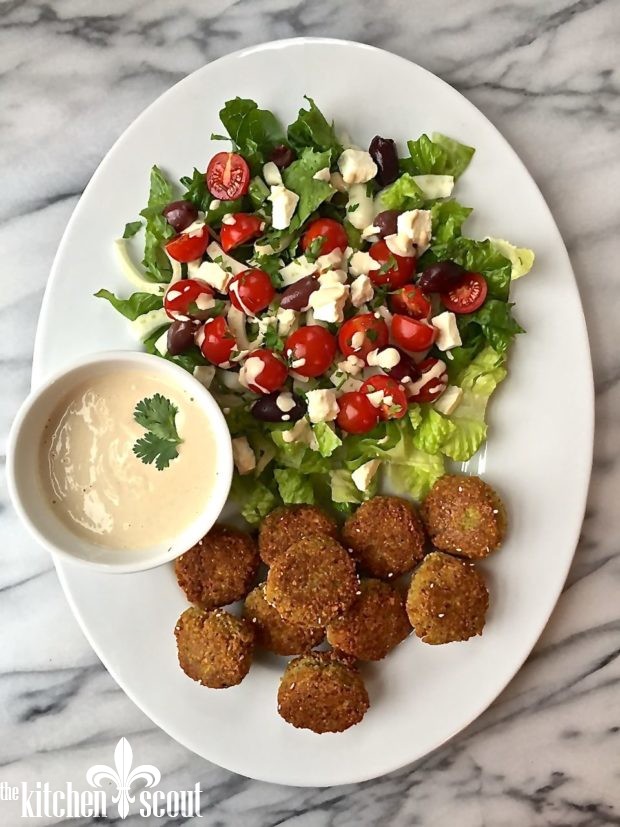 I wish I had some RIGHT NOW!

I got to thinking that falafel can be a lot of work so it would be fun to find a way to celebrate those flavors while also spending less time in the kitchen.  What about a salad?  Could I incorporate the flavors of the falafel into a salad somehow?  That would certainly be easier than making falafel from scratch if the craving struck.

I decided to give the idea a try with bulgur wheat as its base.  Almost a tabbouleh type of dish I thought, but more earthy in flavor, heavier on the cilantro, enhanced with chickpeas and finished off with a drizzle of my favorite light roast tahini.  I used Ina Garten’s bulgur soaking method as a base and then was inspired for the spices and herbs from the Jerusalem falafel recipe.  The rest of it was my own inspiration.

The recipe has been tested by my friend, Amy and her daughter Kate who love to cook together and also happen to enjoy falafel.  Here’s what Amy had to say…

Both Kate and I really liked the spice combination in the salad. There was definitely heat, and we like that. We both really like the consistency of pulsing half the chickpeas, and keeping the other half whole. Kate thought there may have been too much cilantro/parsley…but I didn’t. The dish is similar to Tabbouleh with more of a kick, so a delicious side salad to a Middle Eastern meal. Both Kate and I liked the flavor so much we were wondering how it would be if we substituted the bulgar for a larger grain i.e.: farro that would make it chewier and perhaps more substantial, turning it more into a main dish vs a side (we often will make Farro bowls for dinner and this spice combo would make it tasty!).   Big thumbs up and would definitely add it to my cooking repertoire! Happy to recipe test for you anytime! 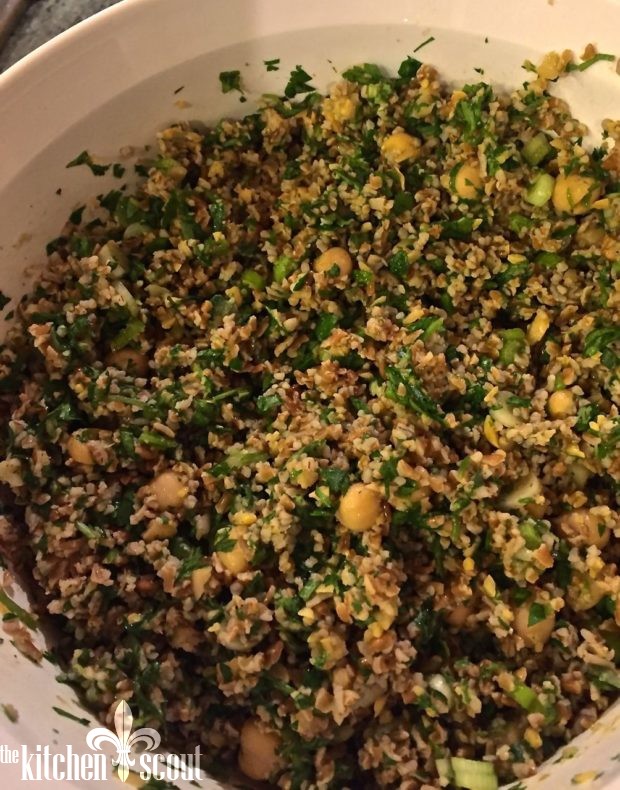 So as for the farro question, it’s interesting because I first thought to use farro but it so happened that in the weeks leading up to my experiment, two people told me they didn’t like farro at all which got me nervous!  So, I went with the more widely enjoyed bulgur.  Our friend, Sheila decided to test the recipe using farro so I suggested she prepare 1 1/2 cups of dry farro which, when cooked should yield the correct amount to correspond with the soaked bulgur.  Sheila tossed the warm farro with the dressing, allowed it to cool and added the remaining ingredients.  She thought it was delicious and wondered if some crunch might enhance it further.  I think a sprinkling of sesame seeds (like falafel) would work or straying a bit you could add a nice handful of toasted pine nuts.

I used Bob’s Red Mill bulgur and would suggest that any medium or coarse grain bulgur should work.  Amy used red bulgur which is what her grocery store carried.

I hope you have an occasion to make this soon.  It goes with absolutely anything.  Feel free to change up the percentages of the herbs if you favor parsley over cilantro.  You can use 1/2 and 1/2 instead of the ratio found in the recipe… 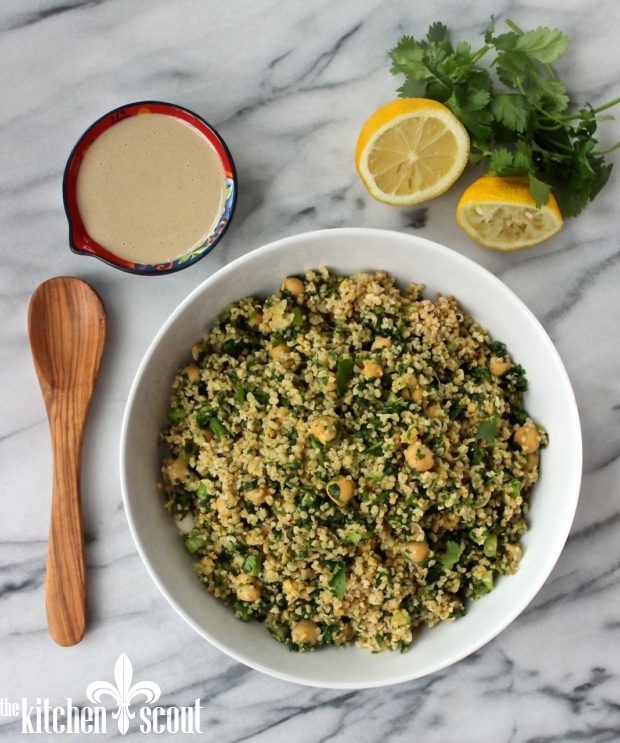 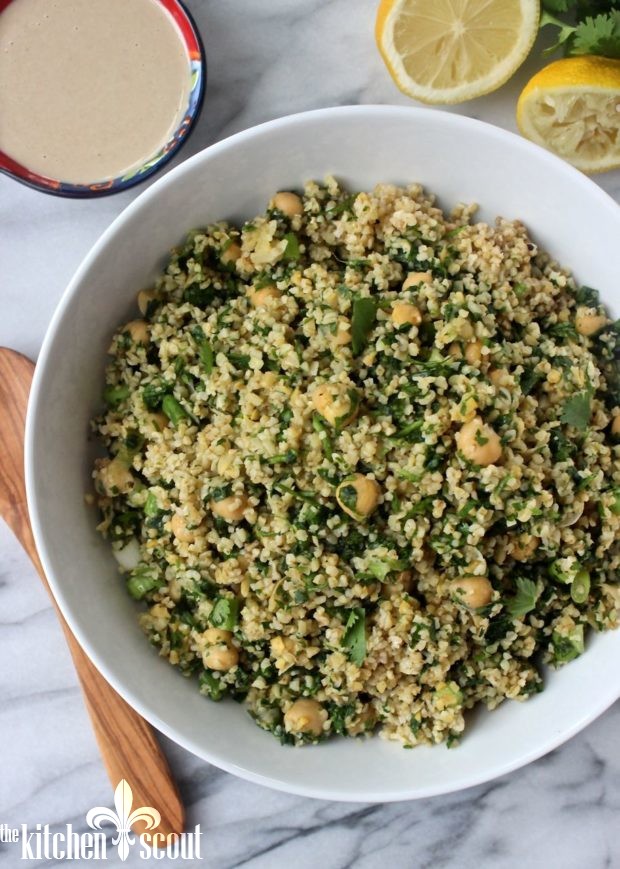 And please let me know what you think in the comments, especially if you make the salad!

One Year Ago:  In the Bag (Travel ideas) 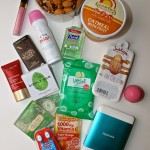 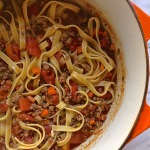 This salad was inspired by the flavors of falafel. A few suggestions. If you would prefer a slightly less spicy salad, cut back the cayenne to 1/4 teaspoon. You can also offer lemon wedges to cut the heat if you have mixed palates! Depending on your preferences, you can also use equal parts parsley and cilantro but cilantro plays a dominant role in the falafel recipe I use. You can sprinkle the finished dish with sesame seeds, or add a big handful of toasted pine nuts to the salad if you would like. The key ingredient is the tahini that finishes the dish and brings home the taste profile of the falafel. I prefer a "light roast" tahini. If you use a darker roast or a particular dense tahini, you may need to thin it out with some warm water. I would also use a little less of the dark roast tahini so the flavor doesn't overpower. The salad can be served alongside any protein. Lastly, if you would like to swap out bulgur with farro, cook off 1 1/2 cups dry farro and toss with the lemon vinaigrette while still warm. Allow mixture to cool before proceeding with the recipe.

A medium or coarse grain bulgur will work here. I use Bob's Red Mill or bulgur purchased at Middle Eastern markets.