Have you ever been struck by lightning?  I have.  Twice.  Of course, I am writing metaphorically here.

I have been struck by events that altered my life in the blink of an eye. Ironically, both times the bolt came through the telephone wires (did I just date myself with the word wires?). The first time, I was in my kitchen and the second time, I was walking with my dog and a friend in the woods.  When I think back to those pivotal instances in my life, I can replay the moments of impact as if they had been recorded.  I remember slowly lowering my body to the kitchen’s floor, grasping the phone and hoping what I was hearing wasn’t true the first time.  In the woods, I stopped in my tracks, listened and then resumed walking at a heightened pace, attempting to find safety quickly.

It was the second bolt of lightning that eventually prompted me to start this blog.

This week was filled with some really interesting meetings and events for me.  I met with two women, both of whom I will be featuring on the blog, one in the short term and the other in the near future. Both women also experienced pivotal events that served as catalysts for new chapters in their very different lives.

The first woman, Helen experienced a lay off from her job and the death of her beloved mother within months of each other.  She sought salvation by preparing a recipe of her mother’s that reminded her of her childhood in England.  Fast forward, she has turned that recipe into a business and with fingers crossed she will be coming to a store near you in the future.  Helen contacted me through The Kitchen Scout after reading this post about another local business and asked if we might meet.  I am hoping to feature her on the blog next week.

The second woman, Linda has been a friend since we were young banking trainees, although we have been in and out of contact as sometimes happens. Nonetheless, we reconnected this past year.  She told me about the lightening bolt moment in her life when, in her mid-forties, she elected to leave her fast paced career to meet the needs of her very young family.  She has written a book for women about “reinventing life and work” that will be published later this year and she graciously asked me to read it for her ahead of its publication.  We spent a few hours together to discuss my comments and her plans for herself and the book.  More on that later.  It’s very exciting.

I also attended an event hosted by Harvard Book Store.  Ruth Reichl, former Editor-in-Chief of Gourmet Magazine was in conversation with Doc Willoughby to promote her first cookbook in over 40 years.  Ruth too had a lightning bolt moment in her life when she was told (with no advance warning) that Gourmet Magazine was kaput, finished, over.  She mentioned that she and her staff went back to her apartment, drank a lot of wine and sat stunned over the news.  She eventually escaped to her country house in upstate New York, found a community of friends on Twitter and reconnected with the kitchen and the physical act of cooking.  She cooked her way through that first year and kept a diary of her “recipes”.  The rest was accidental she says, encouraged by a friend to turn the diary into a cookbook.  My Kitchen Year: 136 Recipes that Saved My Life is filled with stories and recipes written in a relaxed tone, as if you were cooking alongside Ruth in your kitchen.

There are so many parallels among these women.  Two of them found salvation in the kitchen which led to the next step in their journey (I really don’t like that overused word, but it works here).  Linda and her book will help other women navigate the difficult task of asking themselves who they want to be when also faced with a trigger moment. All of them seem to have found a capacity for happiness in their new roles.

I decided to write about these women this week because more than anything, I like to reach people with my blog not only through food, but through the writing.  I was inspired because they each were able to stare down a meaningful life event and find a way to rise above it.  Have I achieved that with my blog?  That’s really a question for me that hasn’t yet found its answer.  I suppose time will tell.

And lest you think I have been slacking off in the kitchen, well I have a bit.  However, I did prepare a traditional Hungarian dish called Chicken Paprikash this week, in part because we will be traveling to Hungary soon and I wanted to start exploring some of its cuisine.  My version took inspiration from Saveur, Food 52 and Sarah Leah Chase.  It’s a perfect Fall dish, not only for its autumnal color, but also because it is cooler weather cooking at its best.  Chicken is braised in a Dutch oven with onions, the warming flavor of paprika and a little bit of tomato paste.  The sauce is enriched with some sour cream.  It would be perfect over some wide egg noodles or rice.  If you are feeling adventurous, you could attempt some dumplings.  Some versions have sliced peppers which you are welcome to add, but I wanted to keep it simple.

While the chicken is simmering, you might ask yourself some questions.  Have you ever been “struck by lightning”?  If you have, how did you react?  If you have not, do you have any thoughts on what might save you?

One Year Ago – Roast Chicken (!) with Garlic, Lemon and Parsley 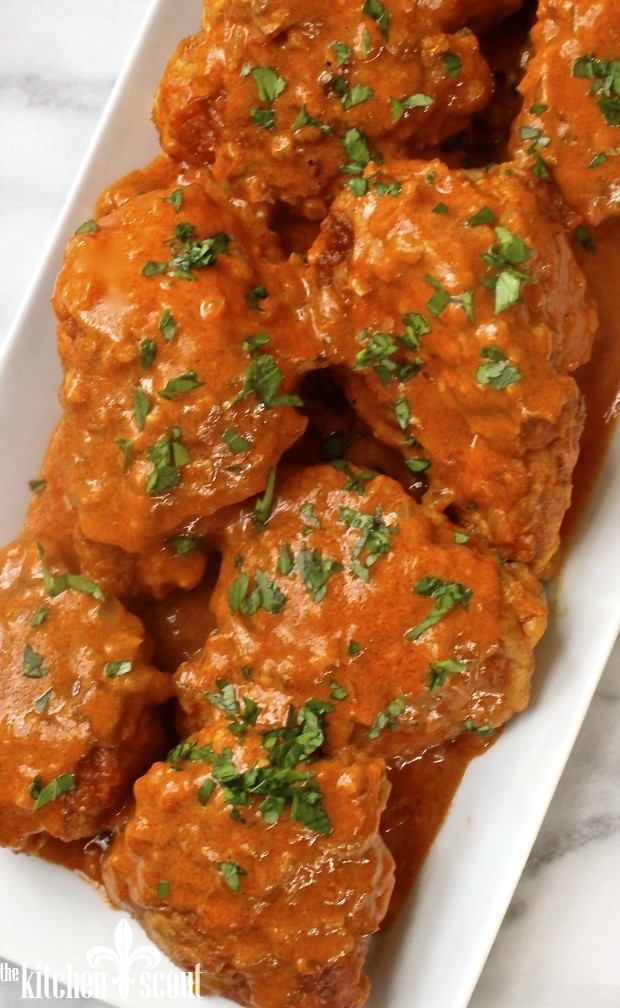 This chicken is a one pot wonder for a cool autumn or winter evening. Pair with some egg noodles, rice or other starch to capture the delicious sauce. Serve with a green vegetable and/or a salad and your meal is complete. I have kept the recipe about the chicken, but you can add a sliced bell pepper to the pan while the onions are cooking if you desire. Use the freshest paprika available to you.

I used 2 large breasts that I cut in half cross-wise and 4 thighs that together weighed about 3 1/2 pounds.