I saw this dish in a Food & Wine gallery online and printed it out to include in my growing pile of recipes to try.

Brussels sprouts and bacon are a classic combination, but I was intrigued at the possibility of them joining forces with gruyere and eggs.  Must try!

Opportunity to make the fritatta presented itself when a couple of friends came over to cook with me.  Although this was a casual morning of testing some fun recipes, it was also a dress rehearsal of sorts.  Amy, Seema and I are teaming up to participate in an Iron Chef fundraising competition in April and we thought it would be a good idea to get to know each other a little better “in the kitchen”.

The fundraiser is the 25th anniversary celebration of a local non-profit, Open Table.  Open Table is near and dear to my heart.  It is an all-volunteer non-profit focused on hunger relief.  Open Table provides a weekly supper and pantry supplies to community members in two locations, my hometown and another town nearby.  My daughter volunteers weekly at Open Table helping with kitchen and dining room prep.  I work in the kitchen at least once a month and really enjoy the camaraderie of the volunteers.  Participating in this fundraiser was another way to support an important local cause (and have some fun while we were at it).

Back to the Frittata!  I chose this frittata and another dish, Turkey & Zucchini Burgers to make during our cooking session.  First up, the frittata. You could tell in the early stages that it was going to be tasty.  Everything’s better with bacon, right? 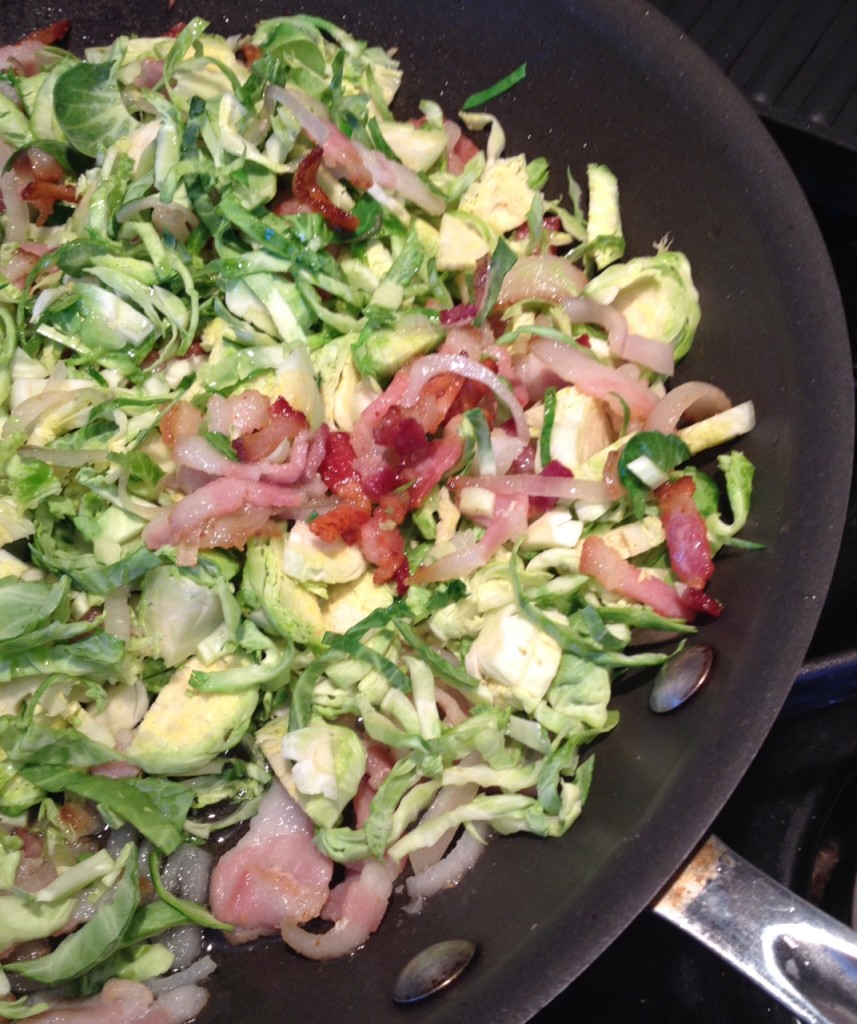 Thick cut bacon is diced and sauteed with shallots and shredded brussels sprouts until tender.  A mixture of eggs, milk and gruyere cheese is poured over the sauteed vegetables/bacon and cooked until the bottom is set.  Three minutes under the broiler and this is the result. 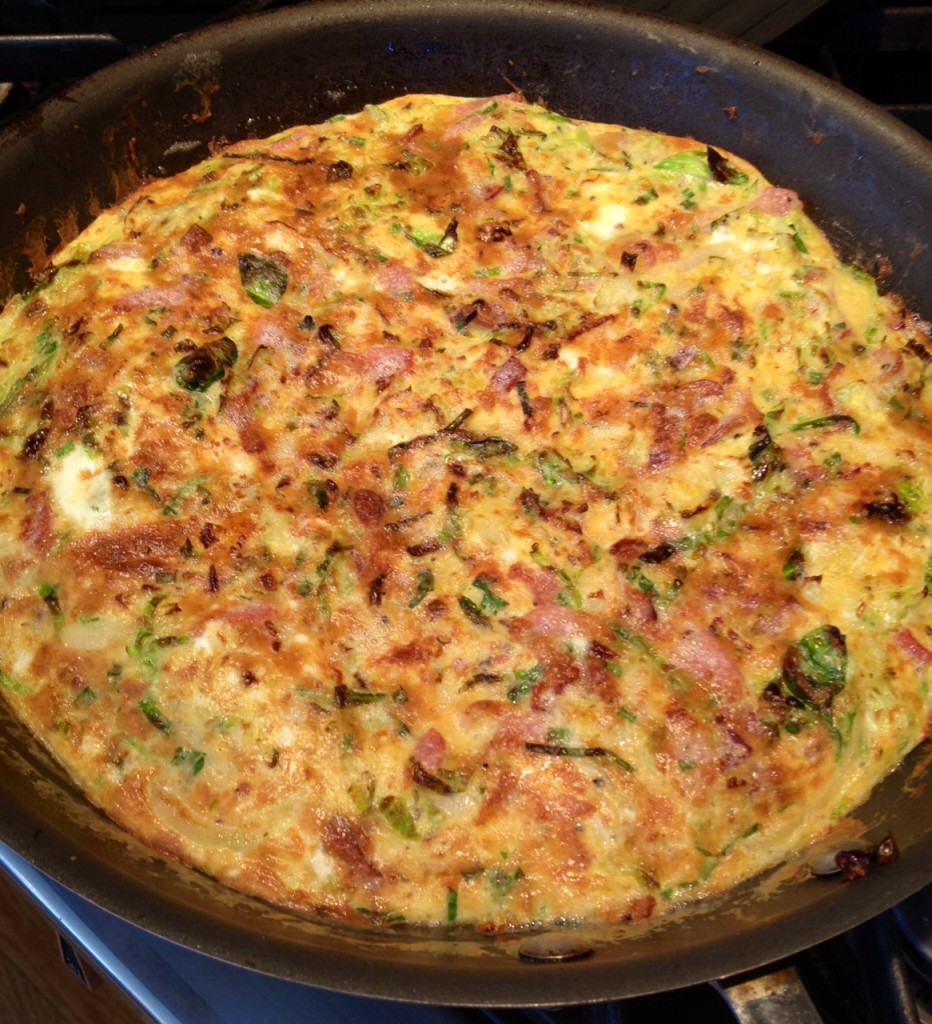 Plated and ready for serving in wedges… 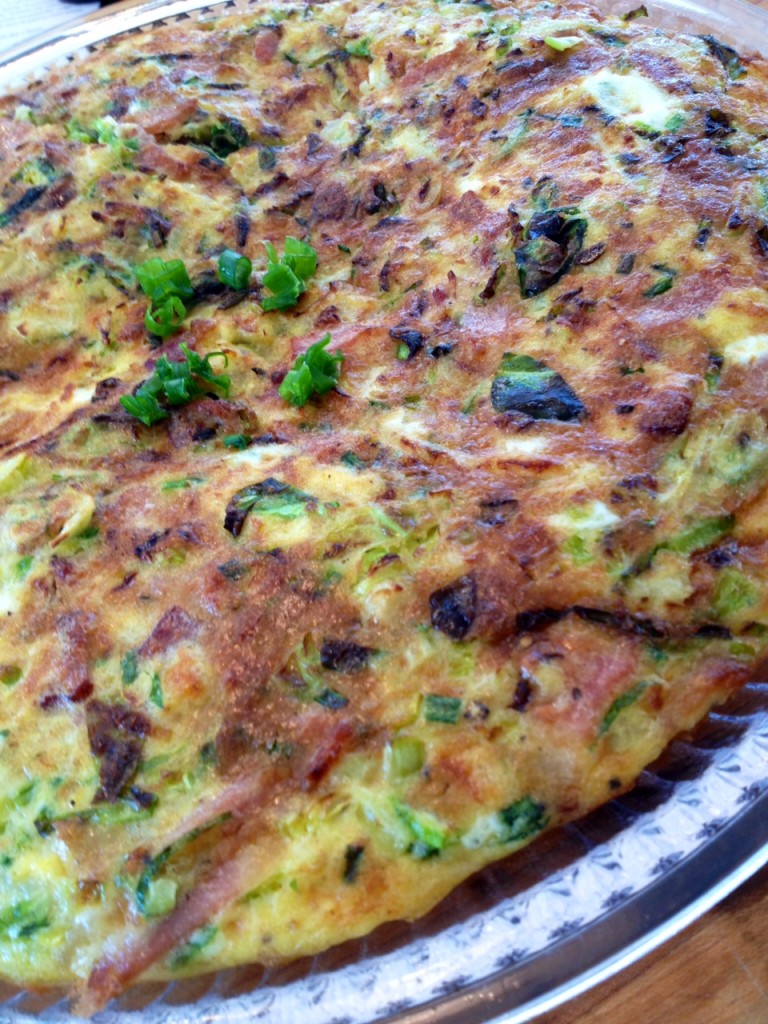 This was yummy and we all agreed we could execute this (or something similar), especially if the secret ingredient was brussels sprouts!  We had a lot of discussion about how we might jazz this up for plating, but unfortunately I can’t share our musings until after the competition – ha!  We also tried to guess what the secret ingredient might be.  I’m thinking it might be a pantry item like cereal, and Seema thinks it’s probably going to be a seasonal vegetable.  Check back in April and we’ll let you know how it all went down.

In the meanwhile, please make this frittata.  I promise you won’t be disappointed.  Even if you don’t care for brussels sprouts.  They play a supporting role to the smoky bacon and creamy gruyere and their flavor really mellows when sauteed.  If you absolutely don’t want to use brussels sprouts, you could shred some kale or swiss chard with good results.

The Frittata recipe is below.  Enjoy!

Kitchen Scout Tips: Using thick cut bacon is a must. It will be more toothsome in the final product. The 12 inch ovenproof non-stick really works perfectly. If you don't have a pan this size, you can use a smaller one and adjust the cooking time. If you don't have a pan that is ovenproof, you can attempt to slide the frittata out of the pan once the bottom is pretty set and flip it over to cook the other side.