When we were newly married, my husband and I lived in Davis Square, a section of Somerville, Massachusetts before we moved to the suburbs.

Other than Redbones, the now closed Gargoyles on the Square and a little Mexican place that had delicious burritos which we ate in front of the TV watching Beverly Hills 90210 and Melrose Place (hey, we were young!), there wasn’t a plethora of high quality restaurant options in town.  Somerville was only just beginning to get it’s hip on.  Fast forward a “few” years, things have definitely changed.

Somerville is now burgeoning with new restaurants, including the second outpost for Chef Tony Maws of Craigie on Main (formerly Craigie Street Bistrot) fame.  Maws opened The Kirkland Tap & Trotter in the Fall of 2013 as an “every night of the week” restaurant to showcase the type of food he serves to family and friends when he has the luxury of cooking at home.  The restaurant is so casual that when asked on its website what the dresscode was, they suggest “just wearing clothes”.  My husband loved that. 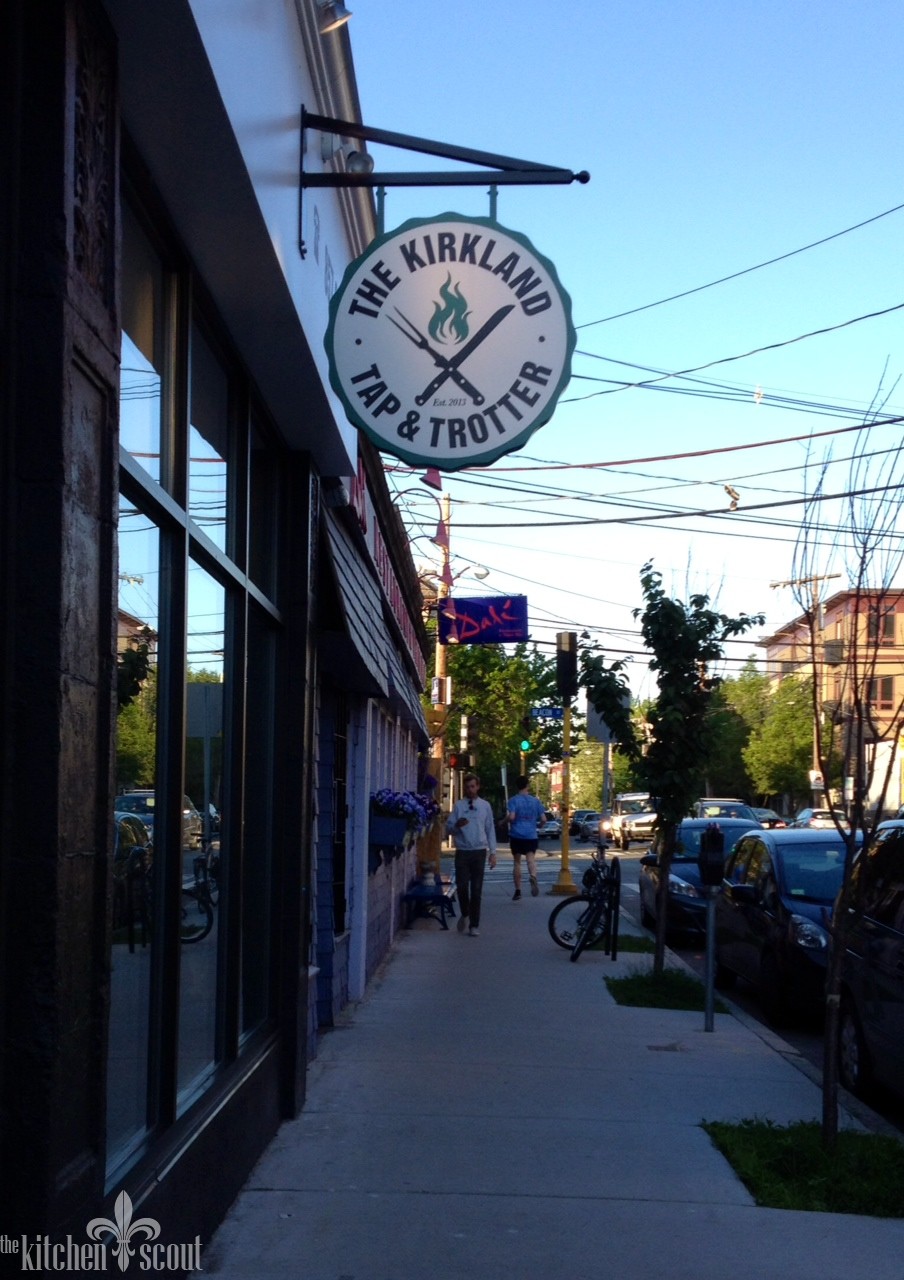 I had been reading about the restaurant in various online publications and it was on my list to try.  We had our opportunity last month and brought along our friends, Sally and Joel. 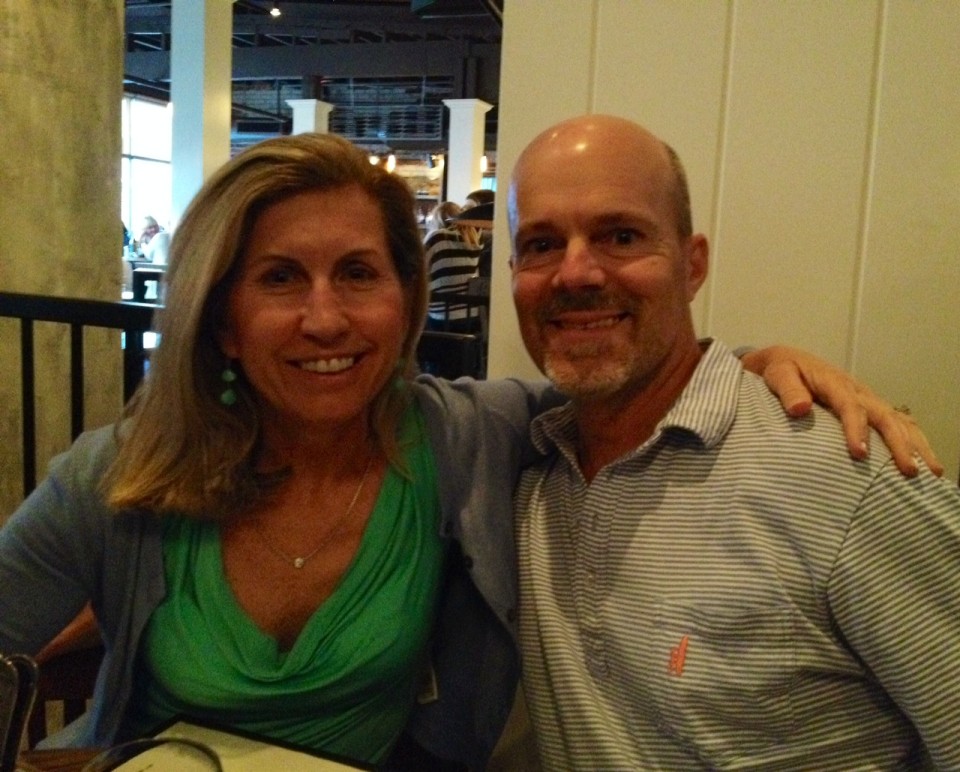 Our reservation was for 7:00 on a Saturday evening and when we arrived, the place was almost completely full and the vibe was electric.  We felt like we had been transported to a hotspot in the middle of well, Somerville (we actually said Tribeca or Soho but you get the point).  The restaurant has a warehouse feel with Americana decor, an open kitchen and a big bar area.

Tables are closely spaced and our small round was pretty tight as plates, cutlery and retro cloth napkins were waiting in its center for us to distribute.  Casual, but with drinks and apps, the table was crowded.

Our server was attentive, but a bit cool.  Were we bothering her with our questions?  She eventually lightened up a bit, and the service she provided was excellent so no real complaints.  I didn’t get blog worthy pics of most of our food because it was dark and as I said, the table was crowded so we didn’t want to keep moving things around.

We started by ordering some drinks from the specialty cocktail menu.  I ordered the “Sass Mouth” which was a delicious blend of Reyka Vodka, Aperol, Apricot and Lemon.  I loved the way it was presented, almost looked like a snow cone. 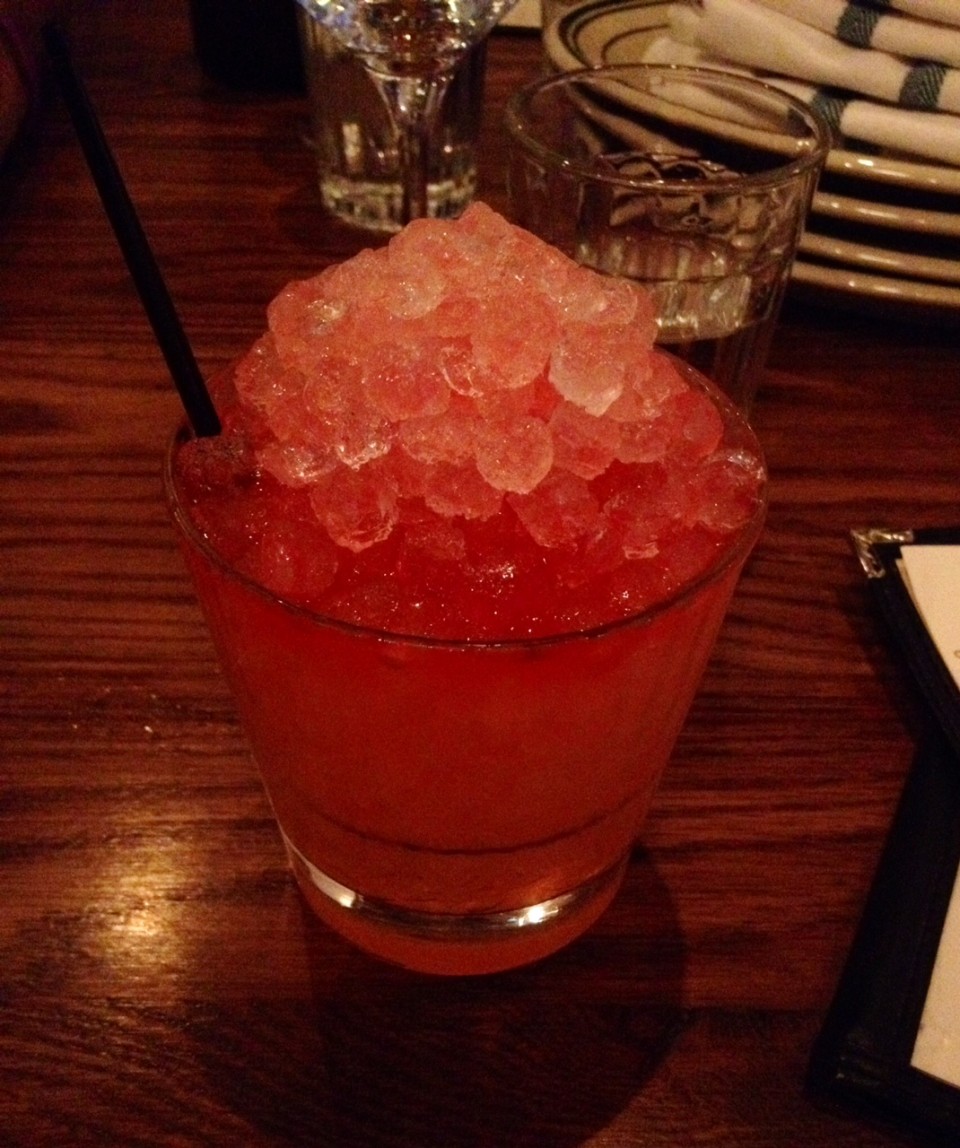 My husband and Joel ordered a drink called “Leaps and Bounds” which had tequila, mint, house-made blue curacao, lime and soda.  Unfortunately, that was not a winner and needed to leap and bound out of there.  There were a number of other fun cocktail options, beers and wines to choose from should you go.

The menu consisted of hot and cold appetizers, entrees, sides and something called “Chef’s Call” where four dishes are selected and served family style to your party for $35 per person.  There are also nightly specials which included a “Daily Grilled Big Fish” and a “Daily Grilled Big Meat”.

Our server mentioned that “pork was their thing” (ahem, Trotter), so those menu items were among her favorites.

Sally ordered a Mesclun Salad with Blue Cheese and Crispy Pork Trotters while the guys and I shared three appetizers including the Moroccan-Cured Organic Salmon, served with a spiced yogurt and meyer lemon vinaigrette, the Grilled Vadouvan Lamb Ribs with Anaheim peppers and the Green Chile Chicken Wings served with cojita cheese, cilantro and pepitas.

Sally really enjoyed her salad.  Of the three appetizers, my favorite was the Cured Salmon. The ribs were pretty tasty, but there were only three to the order and we would have liked more.  The Chicken Wings had a lot of flavor, but not surprisingly were a little messy to eat as they were covered with the cheese.

For entrees, Joel and I ordered the “Big Meat” special, a grilled pork chop with an apricot cashew chutney and grilled baby onions.  They came back a few minutes later and said they were out of chops, but could offer one of us a pork porterhouse instead which we gladly accepted.  Sally ordered the Grilled Big Fish which was Dorade (a Mediterranean fish) that was served whole.  It was served with arugula and grilled proscuitto (which Sally did not eat, but was delicious as Joel and I discovered).  My husband selected the Monkfish which was served with littlenecks and a green apple chutney.

Joel and I were the happiest with our entrees.  The pork was perfectly cooked and the chutney was delicious.  My husband didn’t love his monkfish, but that was more of a reflection of the type of fish than the quality of the cooking.  He thought the accompanying littlenecks were delicious.  Sally enjoyed her fish which they kindly fileted for her, but didn’t think it was something she would order again.  There were still some bones in the fish and it proved difficult to eat.

For sides we ordered the Corn Polenta that was made into a gratin with Comte and Cheddar cheeses. We could have ordered four, one for each of us – it was that memorable. Two other sides of grilled mushrooms and asparagus in a shallot-ponzu vinaigrette were nothing special.

We did share some excellent desserts which included a Bourbon-Caramel banana split and a Biscuit with Rhubarb and an Anise-Hissop Ice Cream.

Overall, the four of us really enjoyed The Kirkland Tap & Trotter, despite some issues with a few menu selections.  Although I was a little disappointed after all the hype, I will definitely return as the atmosphere is young, hip and vibrant, the food was largely well done and the service was excellent.  My advice is that this isn’t a great place for vegetarians and if you go, play to the restaurant’s obvious strengths and order some meat!

Artistry on the Green
Peach & Blueberry Crumble with Quinoa-Oat Topping