We started our second day in NYC with my first visit to the Frick Collection.  We arrived as it was opening for the day which enabled us to go through the galleries at our leisure and without too many people about.

The Frick was the private residence of Henry Clay Frick, an industrialist from Pittsburgh and houses what was his private, exquisite collection of artwork, furniture, sculpture and decorative arts, plus pieces acquired after his death in the 1930’s.  We had missed the recent Girl with the Pearl Earring exhibit, but there was a new exhibit on Clocks and Watches which was very interesting to both of us.

In addition to some of the magnificent art and furniture, I was struck by some of the unique pieces of Sevres porcelain.  My mother loved Sevres and introduced me to its beauty.  I don’t know if she ever visited the Frick, but I sure wished I could have asked her and told her about what I saw.  I loved this turquoise basin.  The color was gorgeous.

I took that photo right from the Frick Collection website so am hoping I don’t get arrested or something.

But my favorite piece was this Pot-Pourris Vase in the Shape of a Masted Ship! 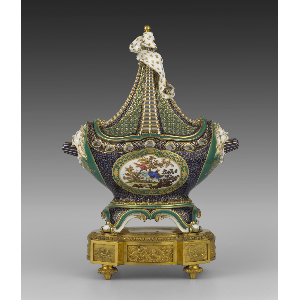 Unique with such intricate detail.  Definitely hard to appreciate from the picture.  So now you must go there and see it in person!

After the Frick, it was time for lunch and since I had also never been to Chelsea Market, we ventured towards its location in the Meatpacking District.  In addition to being an indoor food hall, Chelsea Market is home to The Food Network so I was secretly hoping for a Bobby Flay sighting, but that didn’t happen.  Next time!  We walked through the building trying to figure out what we wanted to eat from the vast options.  Grazing seemed to be the right way to go.  We started at The Green Roll which is a 100% vegan sushi eatery.  It’s other location on East 14th is called Beyond Sushi.  Vegetables and fruits are wrapped with Forbidden black rice or a six-grain rice medley and topped with homemade sauces.  According to their website, owner Tali Vaknin says “You do not have to be vegan to enjoy our menu, it’s all about taking a moment to detox from your daily eating habits and enjoying something wholesome”.  Here’s a picture of what we ordered, the Spicy Mang. So good. 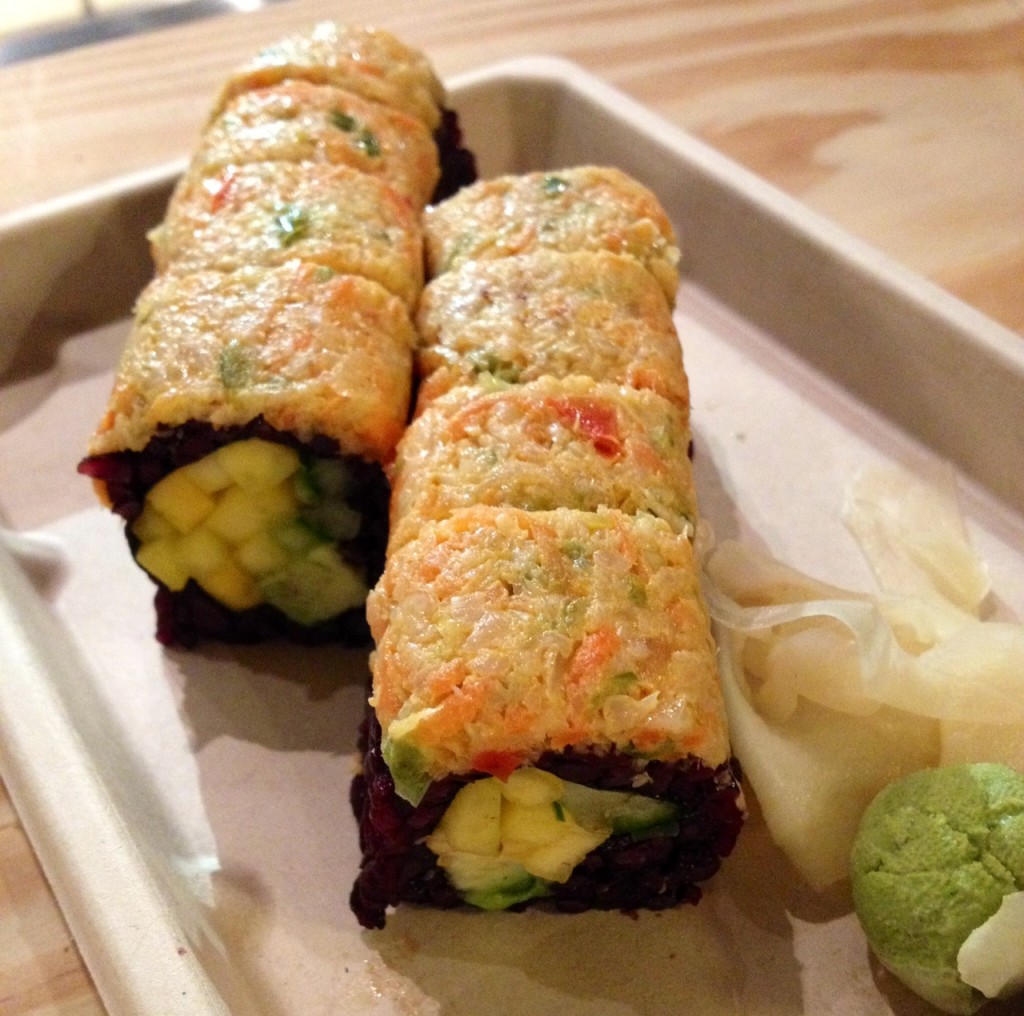 Black rice is wrapped around avocado, mango and cucumber and then topped with a toasted cayenne sauce.  We probably should have ended with this because it was so healthy, but we moved onto something a little more decadent next.  The Lobster Place is where you can find everything seafood related from fresh fish and shellfish, to a sushi bar, prepared foods to take home, or freshly cooked lobsters and a variety of chowders and bisques to eat on site (if you can find a place to stand or sit).  We settled on a traditional lobster roll served in a buttery toasted bun. 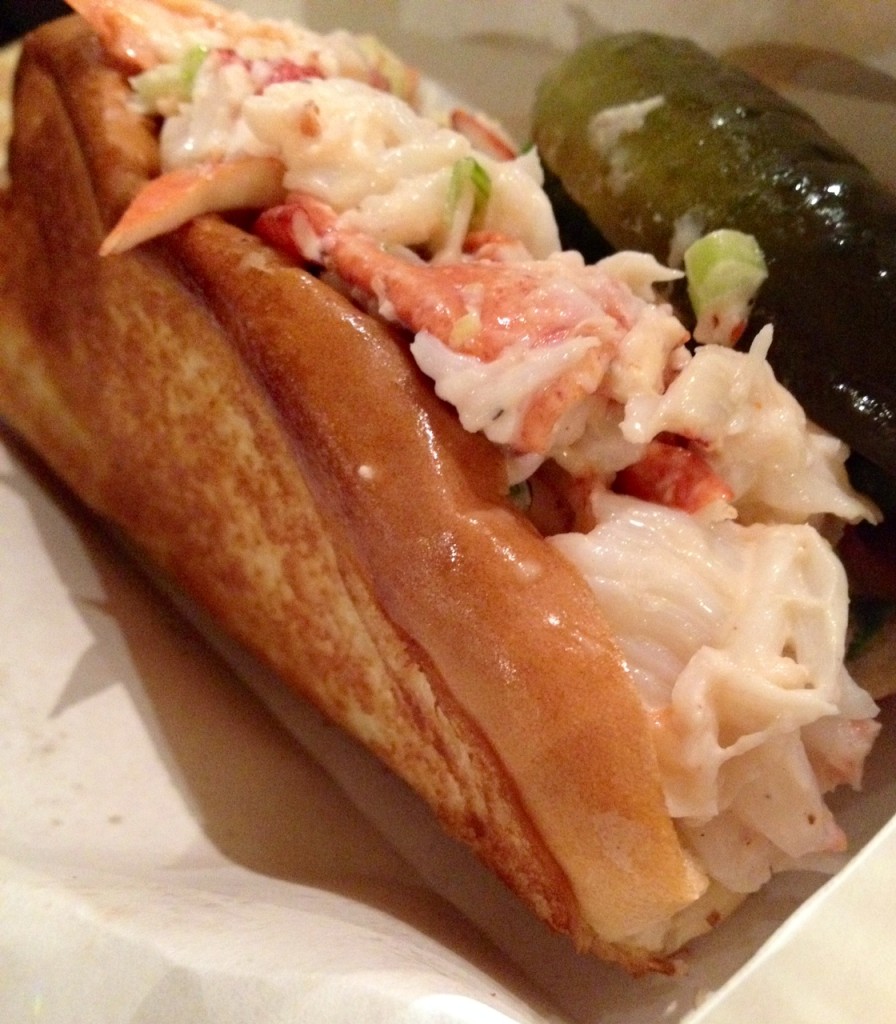 It was good, but hey, we are from New England and we have that lobster roll thing down pretty well so I can’t say it was the best one I have ever eaten.  While we were waiting for our roll, we did sample a couple of the soups.  We started with a scallop and bacon chowder that was to-die-for.  Like, I need to make it now even though I never make chowder good. And we also sampled the lobster bisque which was ethereal.  Maybe we should have just had some soup for lunch instead!

Next stop was Mario Batali’s Eataly on Fifth Avenue.   Since we had just eaten, we did some serious browsing.  Endless amounts of fresh and prepared pastas, olive oils and other pantry items, sauces, meats, cheeses and chocolates filled the enormous space.  For a foodie, this is nirvana.  We left with a large package of Proscuitto di Parma that we planned to eat on our train ride home.

The only traditional bar at Trump is outdoors and was closed for the season.  The restaurant Koi, which is attached to the hotel was open so we ventured there in the late afternoon for a drink and a snack or two.  We ordered two dishes, Tuna Tartare with crispy wontons… 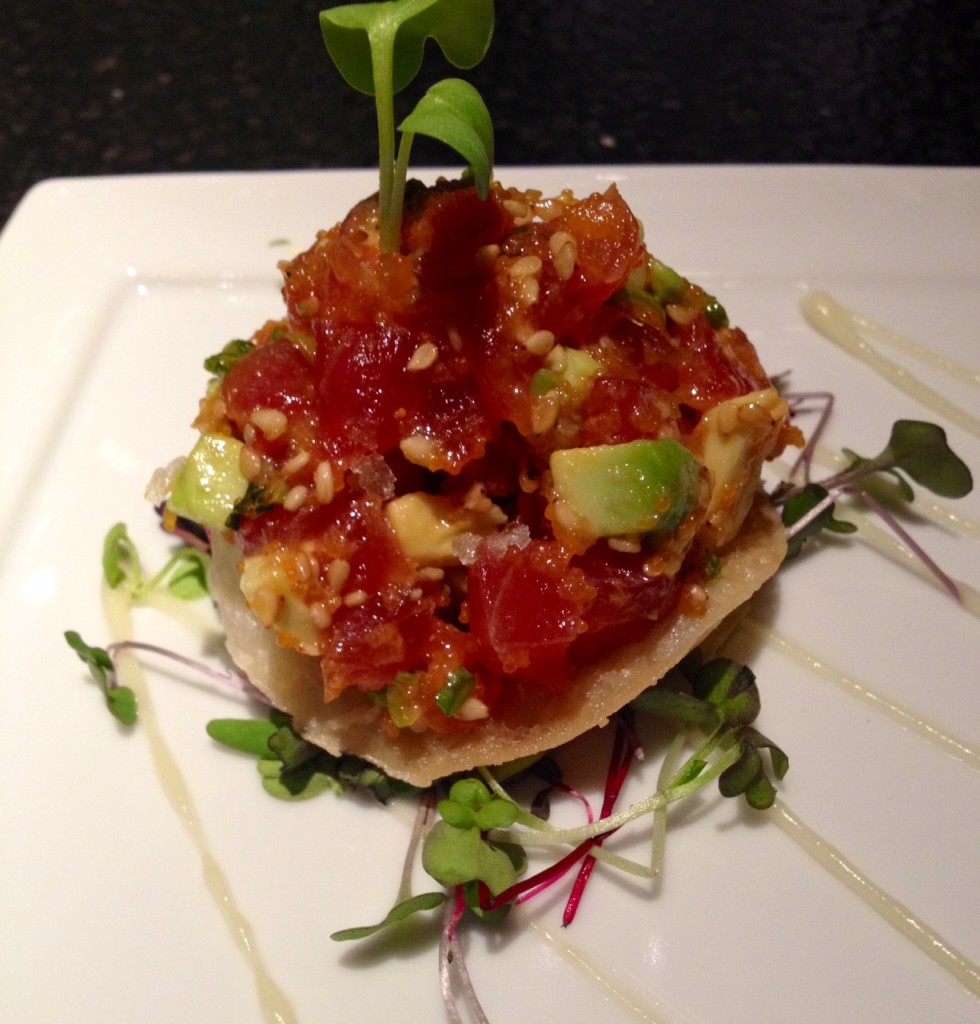 and Koi Crispy Rice with spicy tuna which were both beautiful and delicious. 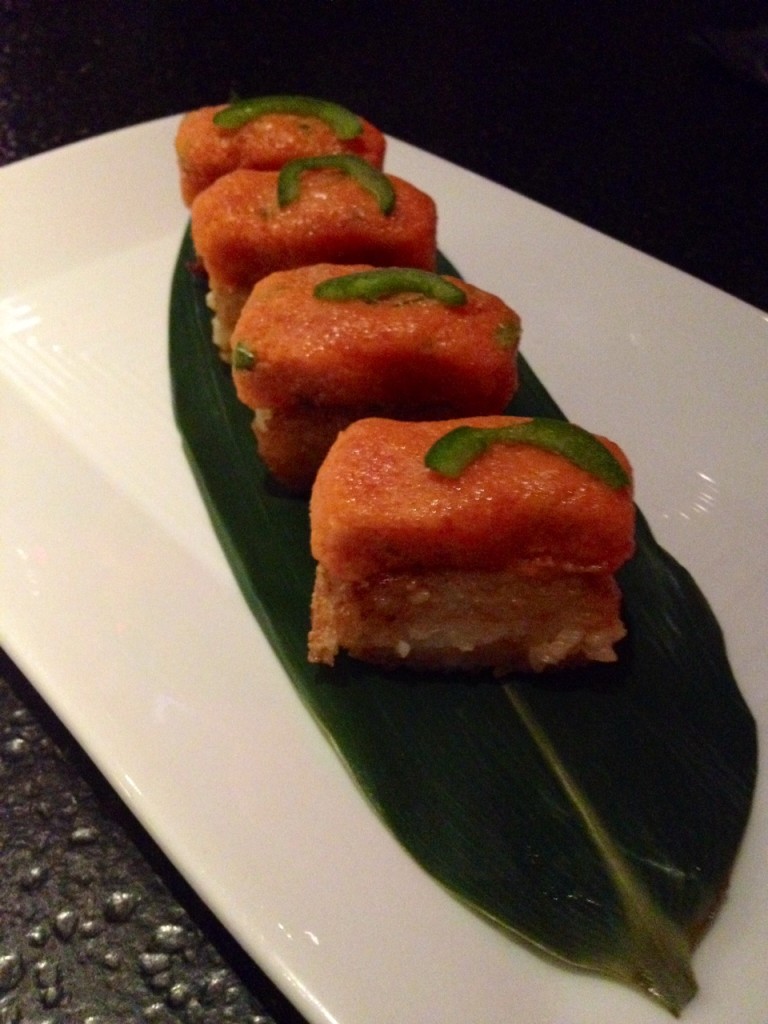 When we were planning the trip, I asked for restaurant suggestions on my Facebook page.  I came away with so many, too many options so it was hard to pick.  Some of our choices were based on what was available as it was Valentine’s weekend, but Maialino was suggested by two friends so we thought we’d give it a try.

Maialino, which means Little Pig is located in the Gramercy Park Hotel on Lexington Avenue at 21st Street.  It is part of the Danny Meyer’s Union Square Hospitality Group which also owns Union Square Cafe, Gramercy Park and The Modern among others.  Maialino felt like an old school trattoria with a cosmopolitan twist.  We were seated in a corner table, so it was dark and not ideal for taking photos of the food.  But our meal was fabulous.

My husband started with the Fried Artichokes while I had Tonnarelli a Cacio e Pepe, homemade pasta served with a rich pecorino and black pepper sauce.  It was divine and my husband loved his artichokes.  For our dinner, my husband had a traditional spaghettini with clams and I ordered the lamb chops which were served with kale sprouts and a fennel puree.  As I was eating, I kept feeling something was missing from the dish and it took me until the next day to realize they had forgotten to plate the fennel puree!  Guess I was having too good a time to notice or care.  We finished the meal with their citrusy olive oil cake which I had ironically seen a recipe for on Food52.

I would definitely return to Maialino and since they are open for breakfast, lunch, dinner and brunch, the options are endless.

Another great day in NYC!