Located in rural Concord, Massachusetts, Bondir is the second restaurant opened by veteran chef, Jason Bond.  His first installment of Bondir located in nearby Cambridge has been a thriving destination for foodies since it opened in November, 2010 and was named by Bon Appetit as one of the country’s ten best new restaurants in 2011.  Bondir serves “Sustainable Modern American Cuisine” which I interpret as artistic food made wtih locally grown and freshly sourced ingredients.

Before Bondir opened in Concord, some friends and I visited the 28 seat Cambridge location to get a glimpse into the Bondir experience.  After spending at least 10 minutes with our waitress who patiently decoded the elaborate and somewhat confusing descriptions of the menu items, we left there not particularly eager to return and wondering how a new Bondir would play out.

Bondir Concord is nothing if not a stunning restaurant.  Exposed brick, warm lighting, intimate seating and a roaring fireplace contribute to its casual sophistication.  A vibrant bar is located in the first room which flows into a cozy room with open kitchen viewing.  A final room in the back allows for a more quiet dinner.  Jason’s wife, Monica greets you when you arrive and she couldn’t be more pleasant or accommodating.  She welcomes you as if you are entering her private home, which you are in a way!

Bondir’s menu consists of roughly a dozen items, each of which can be served as a half or full portion which provides flexibility.  Dishes range from soups to non-traditional salads, eclectic pasta dishes and modern twists on classics like cassoulet.  The descriptions are somewhat more straight forward than what we found in Cambridge, but nonetheless they still warrant some further explanation by your server.  In our case that server was Nathan who suggested we ordered three half-portions each.  Instead, we mostly opted to order a half-portion to start and a full-portion to finish and it was plenty of food.  (I had previously dined at Bondir with two girlfriends and we shared six half-portions which was perfect).

We were long overdue for a catch-up with our very good friends, Chris and Bredt so we met them for dinner at 7:15 on a Sunday evening.  The restaurant was very busy, but seemed to get noticeably quieter by 8 (especially the bar).

To start, I ordered the Gnocchi Parisienne Gratinee which was served with Kale braised with “Prairie Fire Chili Oil”.  The gnocchi was outstanding, melt in your mouth.  The Kale was almost an afterthought and was too bitter next to the gnocchi so I didn’t finish it. 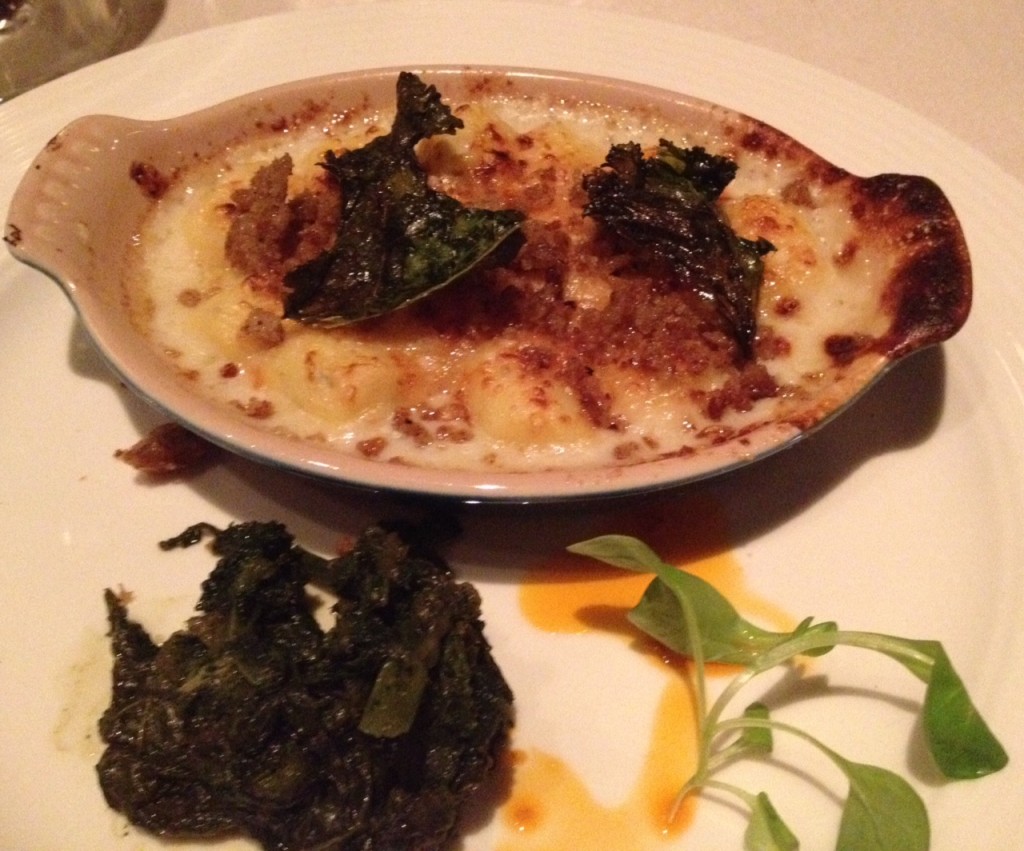 My husband and our friend, Bredt ordered the Quadrello di Bufala with Mangalista Proscuitto, Blood Orange and Brown Butter Gingerbread Crumbs.  Their dish was artfully plated… 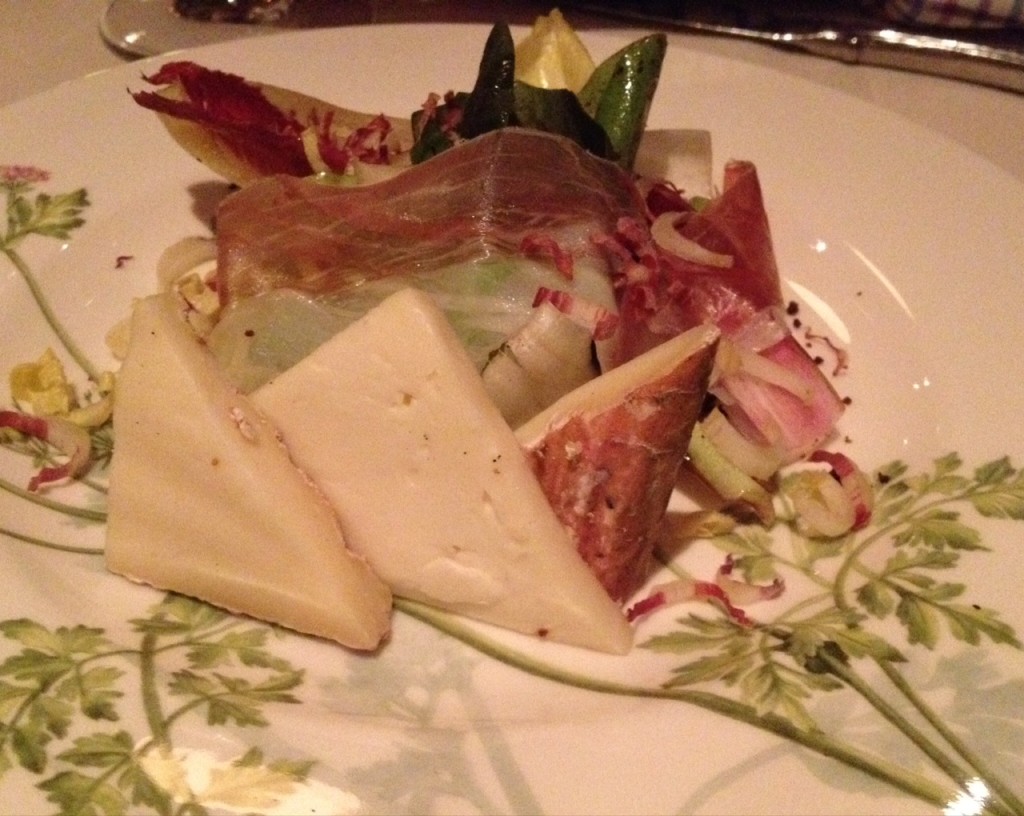 The waiter alluded to the fact that this dish was more like a cheese course, but served with greens so called a salad.  Bredt and my husband thought it was delicious.

Chris ordered the Celery Root Soup with Tasso Ham, also a great selection.  What Chris appreciated was getting an honest answer from Nathan who helped him choose the soup over another dish on the menu, a Carrot Flan. 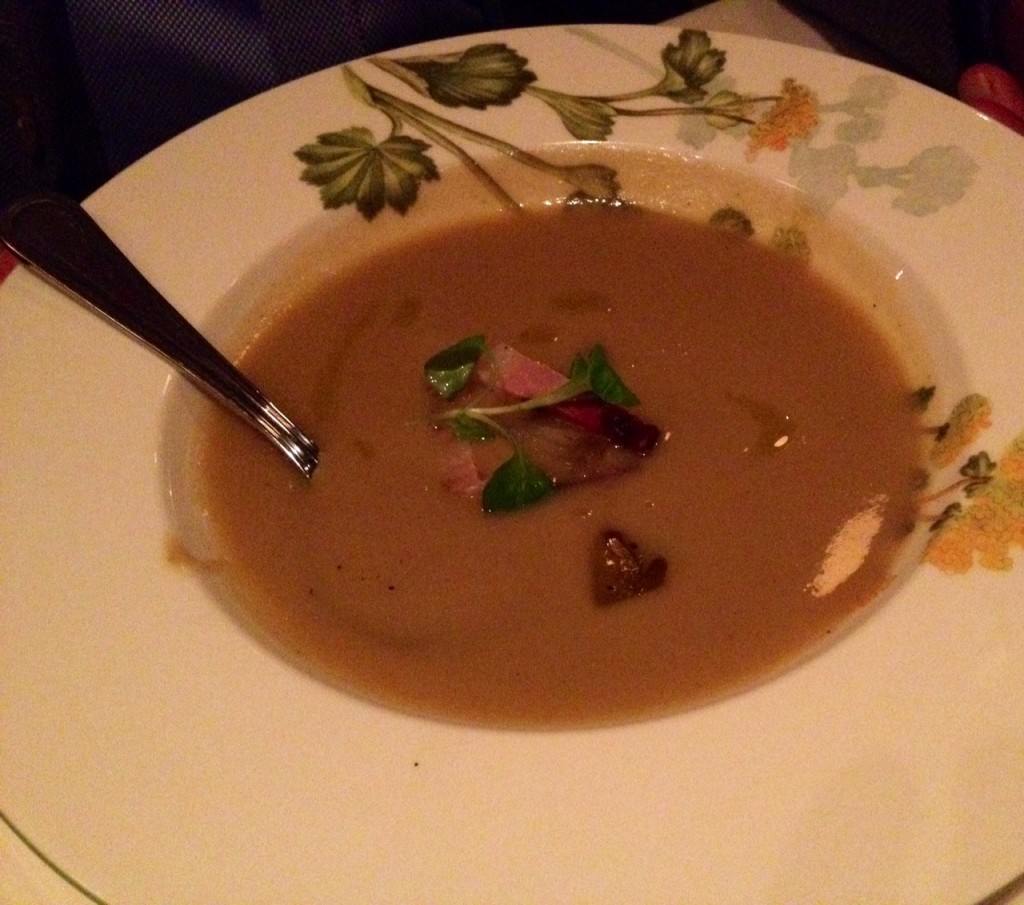 Chris thought the soup was an “artful, savory combination of celery root and ham. Magnificent texture contrasted with the heft of the salty meat”.

As a side note, don’t you love the china?  At Bondir Cambridge, each dish is served on a different piece of china which makes the table very colorful.  In Concord, it appears to be more streamlined with fewer patterns but still lovely.

There was one duck and one beef dish on the menu, but we all selected either pasta or fish for our next course.

Bredt and I had a full order of the Olive Oil poached Black Bass.  It was delicious and Bredt remarked that a half-portion would have been just a nibble after starting with a salad.  The fish was tender and moist from its olive oil bath. 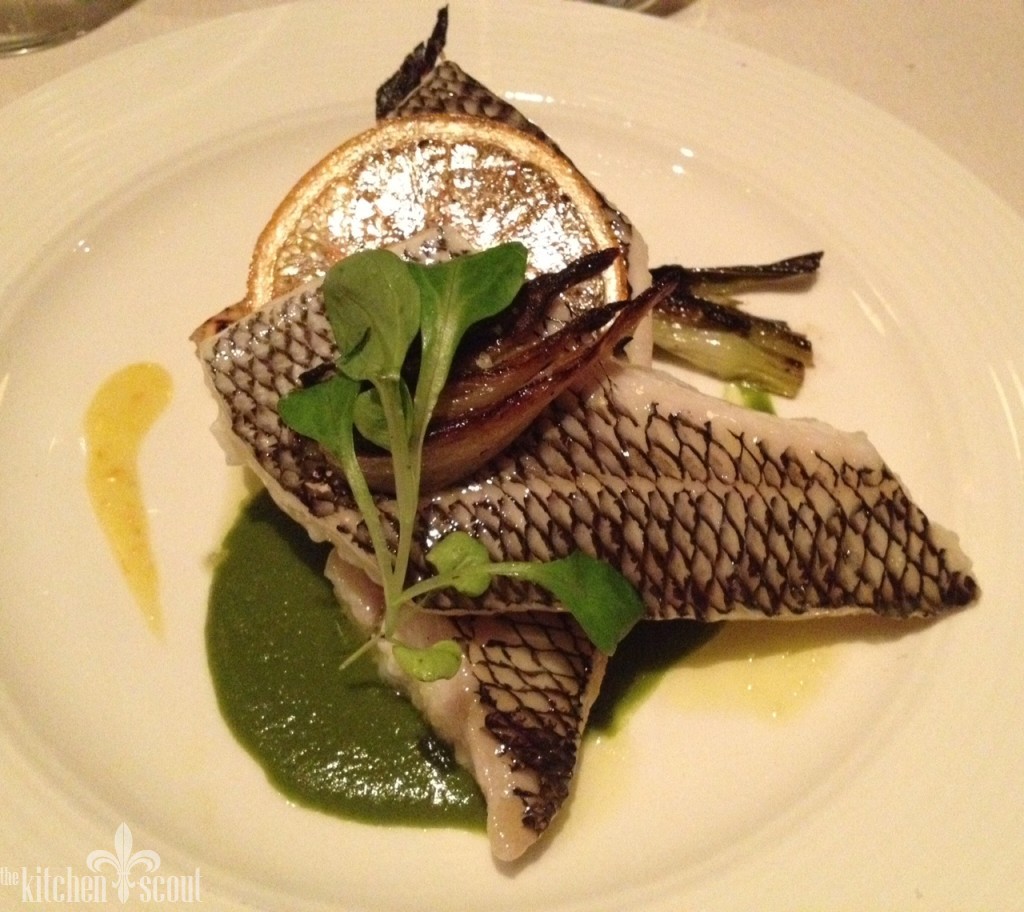 My husband’s pasta was possibly the best dish of the night.  Fava leaf parpadelle was served with a Red Wine Venison Ragu.  The parpadelle was presented on its side, rolled up and accompanied with a flavorful, delicate sauce and garnished with shavings of Parmigiano Reggiano. 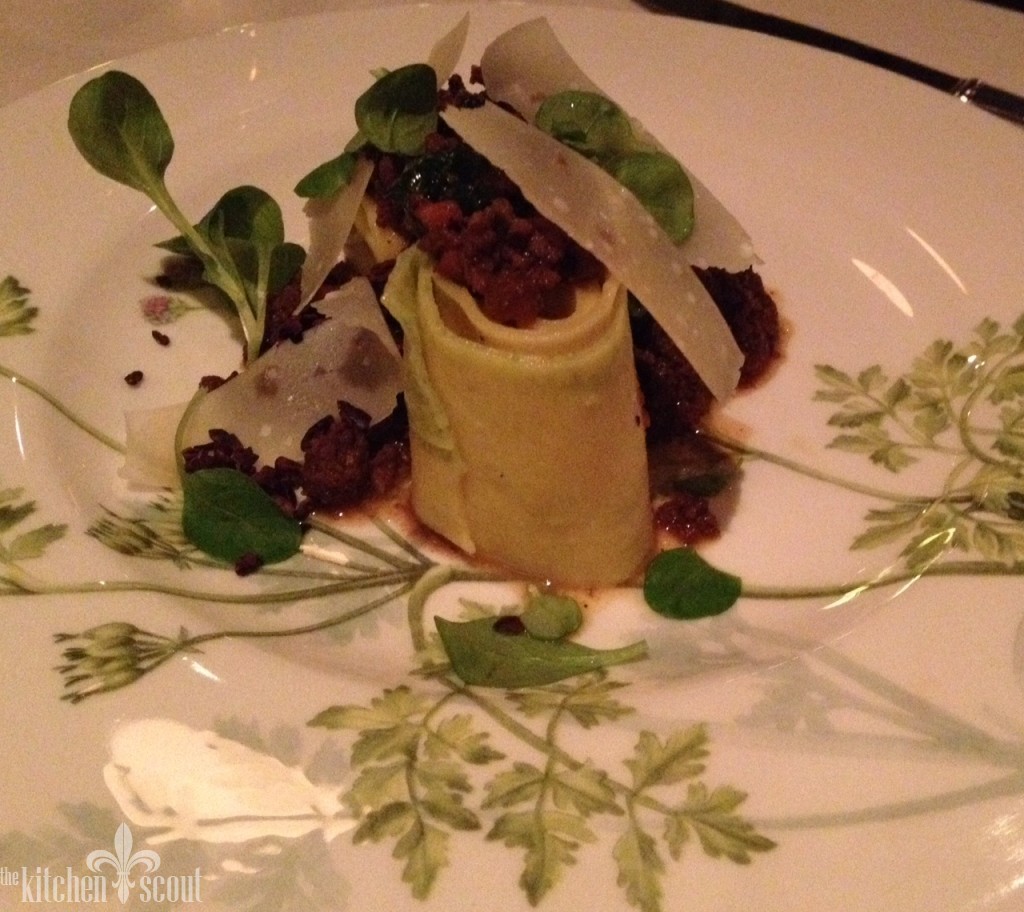 My husband also ordered a half-portion of the South Shore fishes.  Scallops and Monkfish Brandade were served with olives, radish and a citrus vinaigrette.  Very pretty to look at but unpleasantly salty. 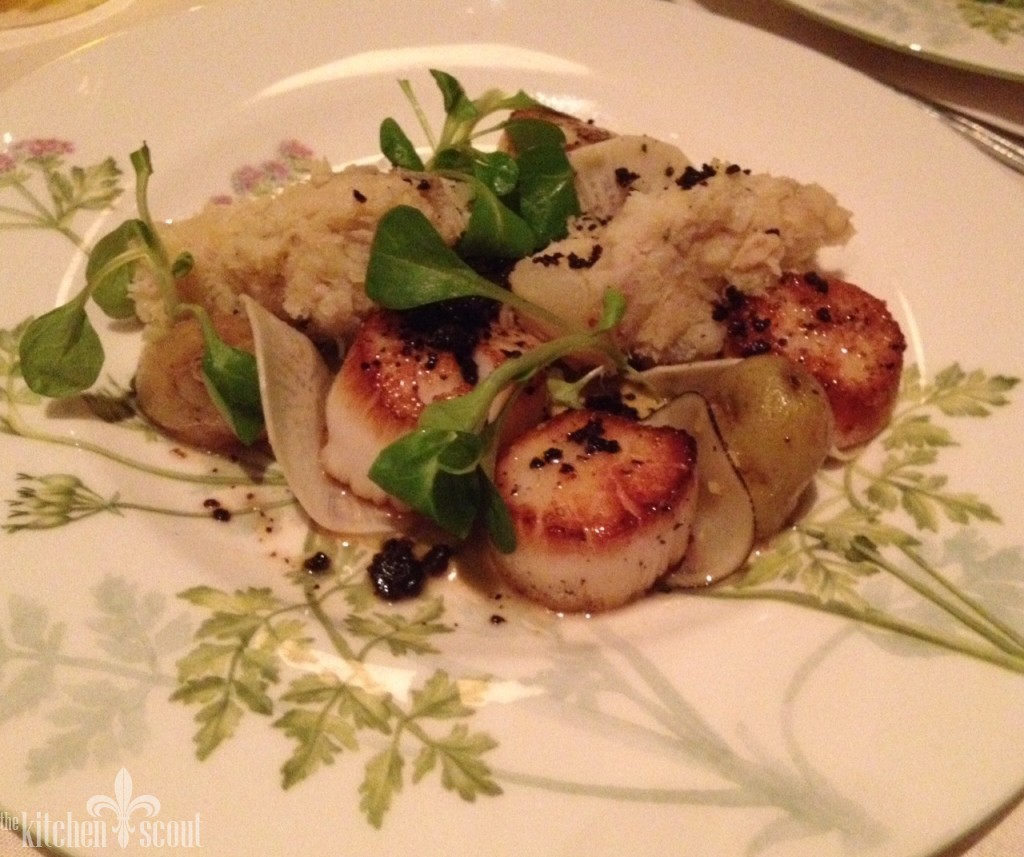 Chris ordered the Rye Flour Agnolotti which were filled with foraged mushrooms and surrounded by fava beans and garnished with ricotta.  Chris commented that the pasta was good, not great.  The mushroom filling was moist, subtle and pleasing to the palate, but the portion (full) didn’t seem plentiful and the pasta itself was dry and grainy. 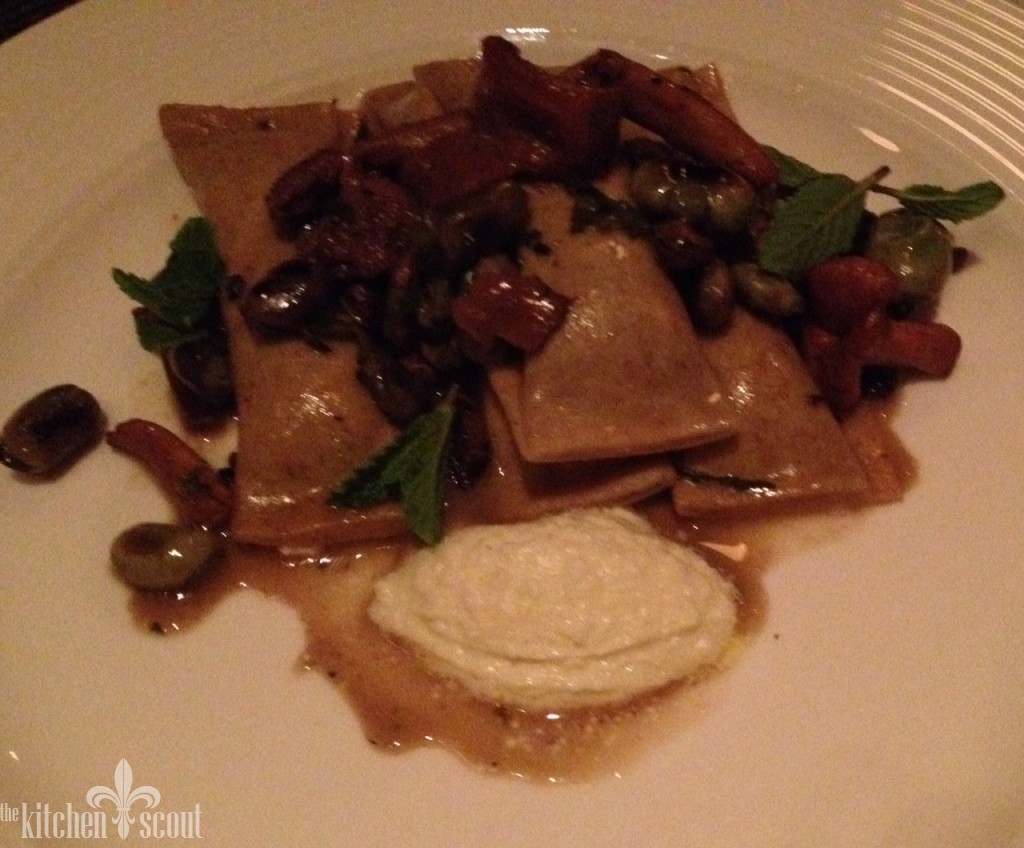 The dessert menu had a lot to offer including a cheese course, three dessert plates and five “ices or creams”.  Bredt chose the Cardamom-Honey Poached Green Gage Plums which was served with an almond cake.  Chris and my husband had the other two plated desserts (Coeur a la Creme and Calvados-Dark Chocolate Mousse) and I chose Dark Chocolate-Orange Gelato.  We all thought dessert was yummy and to quote Bredt she “liked the mixed bouquet of flavors, beautifully presented, and not too much of any one thing.  After our meal, I would not have been happy eating a larger dessert.  The interesting melding of flavors were a welcome ending to the meal”. 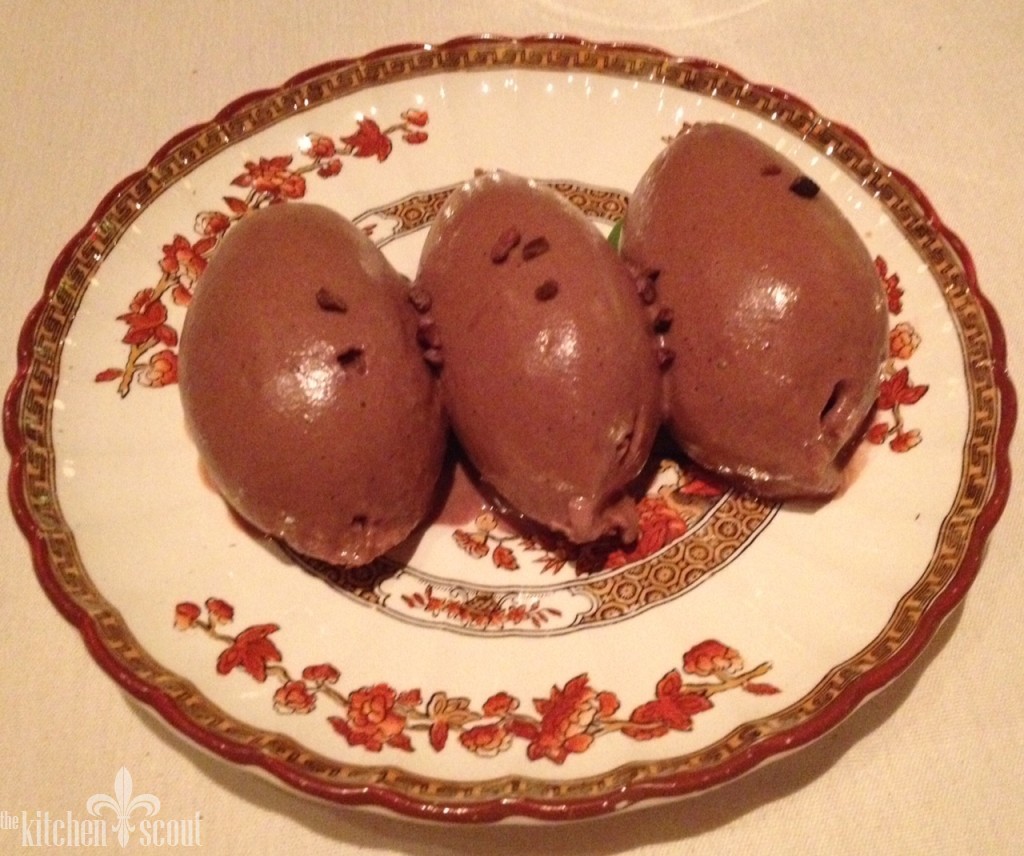 And of course, a shot of our wonderful friends (and co-scouts), Chris and Bredt… 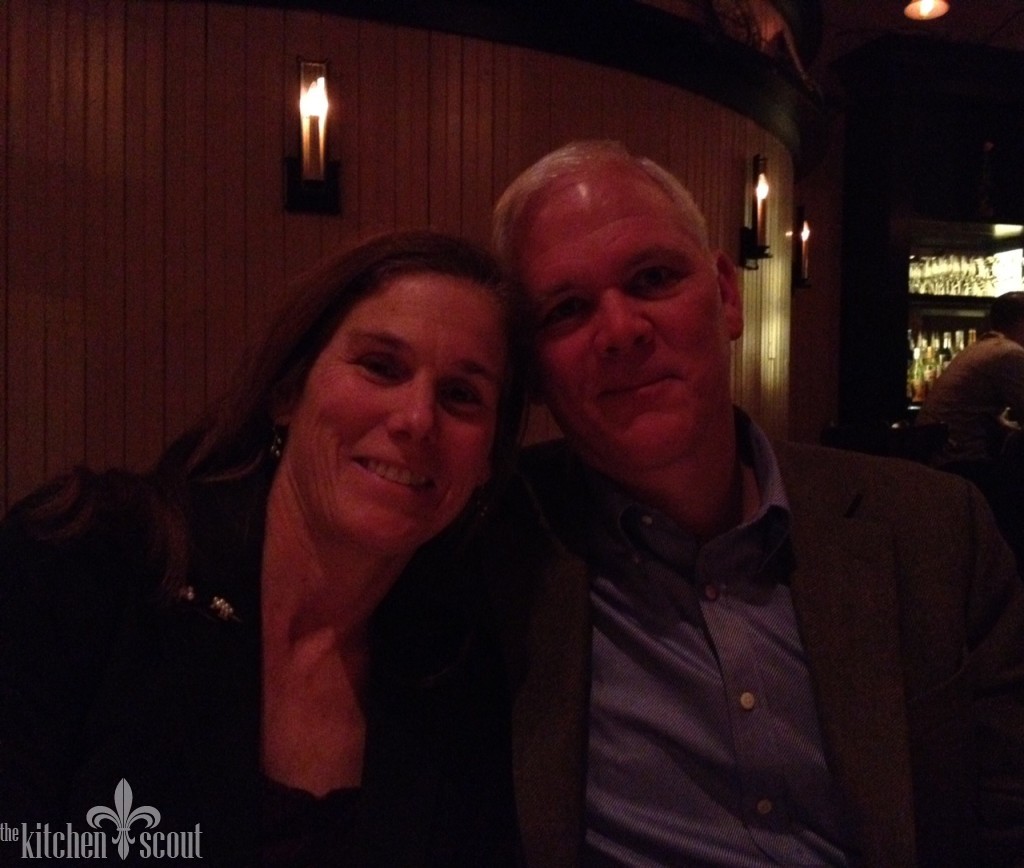 Service was friendly, attentive and helpful.  Bondir is a welcome addition to the growing restaurant community in Concord.  I do look forward to returning to sit at the bar with one friend, a glass of wine and a half-plate to experience it in a new vein.  As for dinner, two visits in six months feels like the right tempo and I suspect I will check back in for a late spring-early summer menu.  If I can get a reservation that is.