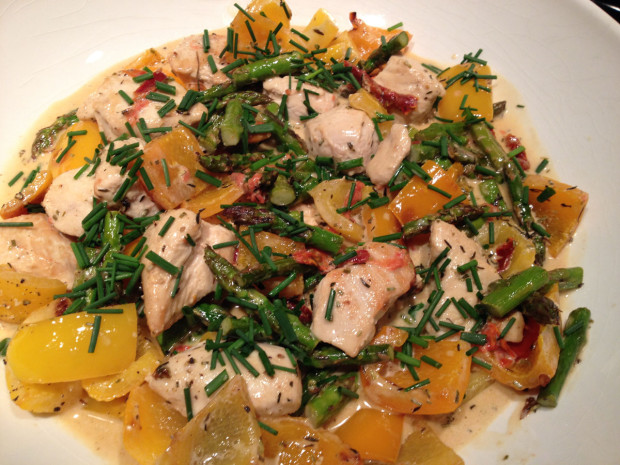 Some of the recipes I’ve collected over the course of my lifetime feel like old friends to me.  I may not “see” them all the time, but they will be there for me should I need them and won’t let me down.  Time spent pouring through my less than organized recipe files, my original recipe box and endless cookbooks is like visiting with my oldest friends, reacquainting myself with them and figuring out ways to keep in closer touch.  Checking in with them also transports me back to the place and time I originally acquired the recipe or book, some of which are personalized with a note from family or friends.

“Adrienne’s Thanksgiving Yams”, were brought by my friend Julia to a pre-Thanksgiving feast I held for about 20 friends at my Beacon Hill apartment back in my working girl years.

“India House Banana Bread” is in my church’s community cookbook and was contributed by my great Aunt Elizabeth.  It is my go-to recipe for banana bread and I think I finally have it memorized.

“Blueberry Cake” is another favorite that lends itself to all kinds of interpretations.  My friend Kris made it one night when she and her husband hosted me and a date for dinner at their home.  The date happily didn’t work out, but the cake and I have been in a committed relationship ever since.

“Marinade for Butterfly of Lamb” came from my friend, Bredt.  When my husband and I were dating and for a few summers after we married, we were invited to spend a week at Bredt’s magical family owned home in Canada.  Grilled butterflied lamb was on the menu one night and this was the marinade.  I remember using the same marinade for my daughter’s post-Christening dinner and as I handed the lamb to my father to grill, he looked at me and asked WHAT was on the lamb?  We Armenians don’t use Dijon mustard in our marinade!  It still makes me laugh.

And finally, Apricot Chicken is a recipe given to me by one of my oldest friends, Arlene.  I can’t remember why she gave it to me, but it is an easy, old-school recipe that makes me happy.

Most of these recipes are hand-written and I wouldn’t dream of typing them into my computer as I like them just the way they are (like my friends).  Perhaps my favorite old recipe is one that has no title, but is for a dish called Sou-Bereg which is the Armenian version of Spanokopita.  On a brown piece of paper, I wrote the recipe in red pen as it was dictated by my mother, Joyce.  The piece of paper is almost torn in half, but it will be taped before it ever gets tossed.

The brown paper was on a pad next to our kitchen telephone growing up which was used for phone messages and other notes.   And so when I carefully pull that brown piece of paper with red writing out of my recipe box, I do get to go back to another place in time for just a few minutes before I get my ingredients together.

So, how did I start thinking about recipes as old friends?  It was the night before we were leaving for a long weekend to take our daughter to college for the first time.  I was determined to use what I had in my fridge for dinner.  I had chicken, peppers, asparagus and some cream.  I do have a memory receptor for recipes because (here it comes) they really are like old friends to me who never leave my mind.  I knew “Chicken with Red and Yellow Peppers” was a Silver Palate oldie but goodie and it brought me back to simpler times when our kids were young and we were part of a dinner group of sorts.  My friend, Susan made this dish one night for the group and it was delicious.

I hope you like reacquainting yourself with this easy and delicious recipe, or introducing yourself to one that may become a lifelong friend.  Enjoy and check out my Kitchen Scout tips at the end!

As you can see from my pictures, my peppers were yellow and orange which obviously works fine, but I think the red gives the dish’s appearance more punch so I did add some slivered sun-dried tomatoes to the final dish which gave it some added depth of flavor. Also, I think for 6 portions, the amount of chicken in this recipe is too much! I think you can easily cut back the amount of chicken to 5 to 6 split breasts and be perfectly satisfied.