I want to tell you about our visit last weekend to Waypoint!

I have been trying to get to Michael Scelfo’s second Harvard Square establishment (Alden & Harlow being his first) since it opened and we finally had a chance to visit!  I am a big fan of Scelfo and it would be my dream to cook alongside him as the imagination and creativity he brings to his dishes is, in my opinion, outstanding. On Instagram, he is constantly posting dishes from both of his restaurants and from his #dinnerathome series that he cooks up for family and friends.  His photos make me want to jump in my car and drive to Cambridge on the spot… 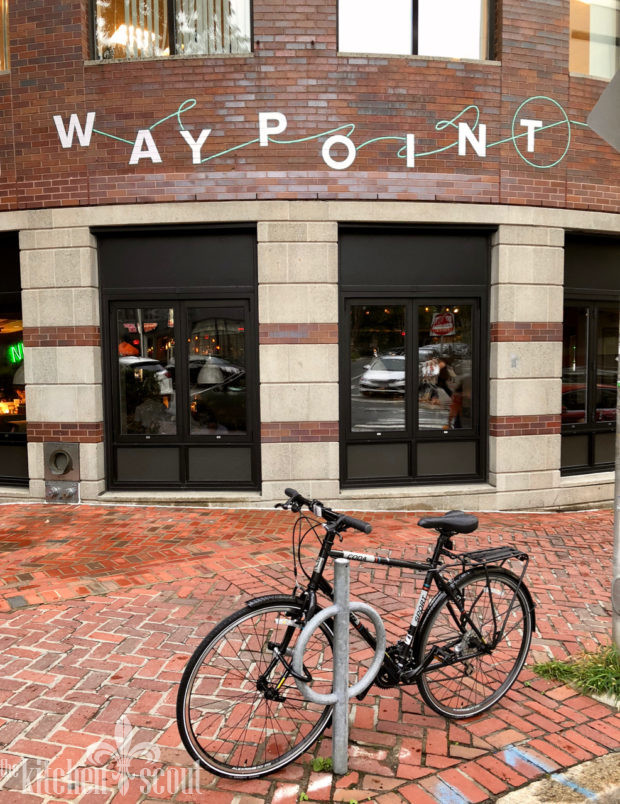 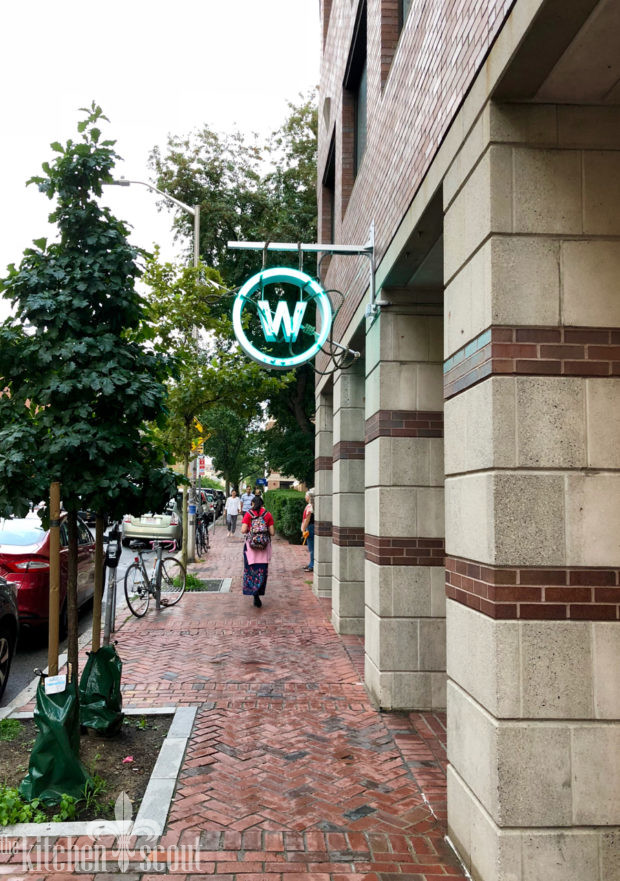 We have dined at Alden & Harlow a few times and really enjoyed it, so I have been looking for a chance to get to Waypoint, located just on the outskirts of Harvard Square on Mass. Avenue.  The menu is largely seafood based but not to worry if you are not a seafood lover, there are plenty of other enticing dishes to try.  Make a reservation online as the place is busy, and with school about to start up you can bet Waypoint will be packed come September.

First up, a cocktail.  My husband ordered off the menu, but I was intrigued by the Tales of Absinthe offerings.  A historically controversial spirit, Absinthe has notes of fennel which I love and was offered in four preparations.  My friend Kris Ann told me she had enjoyed The Professor (cognac, lemon and honey) when she visited a few weeks back, but I chose Millions of Peaches that paired white absinthe with bourbon, peaches, jalapeno and lime.  It was fantastic and a real palate opener.  If you enjoy anise flavor, I suggest giving one of these cocktails a try.

The menu is inspired by the coast and the season.  Raw Bar offerings range from oysters, clams and shrimp cocktail to various crudos ($14-18).  Snacks are priced from $7-10 and include Pan Con Tomate served with lobster and French Fries served with a crab & chili mayo as examples.  Feeling indulgent?  Try some Caviar priced by weight and served with blini, donut holes and buttermilk crema.

For our starters, we ordered a half dozen oysters from Plymouth that were wonderfully briny and served with a delicious fermented fennel mignonette that are not pictured.  There were several oysters available the evening we visited and our server was excellent at describing each variety so we could choose what appealed.  After ordering, he also mentioned how he would bring out the four dishes we requested so that we had adequate spacing.  Unfortunately, after we finished the oysters we were supposed to enjoy our next raw bar offering of the Chopped Tuna Crudo, but a different server brought one of our hot dish selections instead. After explaining the issue, the server was quick to take the dish back, in this case a pizza, so that we could enjoy our Chopped Tuna Crudo first.

The crudo was served with a curried chickpea socca (like a pancake), figs, honey and whipped buttermilk.  Not the best picture, but I followed it up with one from Instagram that shows you a much prettier version! 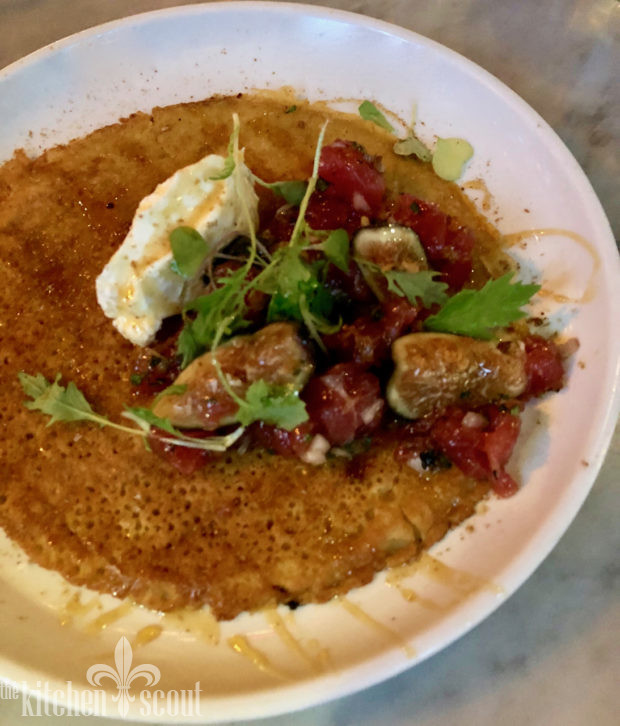 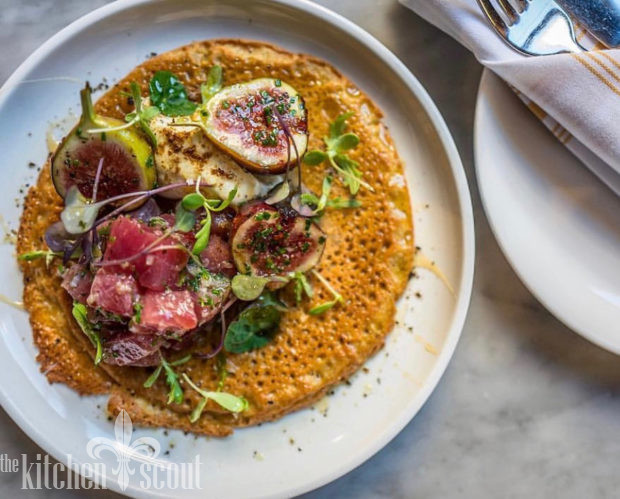 All of the flavors of this dish individually were wonderful.  The socca was seasoned with Middle Eastern spices that you know we love and the honey and buttermilk were a lovely accompaniment to the figs.  My husband really enjoyed this dish, and while I also appreciated each ingredient individually and thought the flavors were incredible, I felt that the tuna was a bit lost and competing for attention.  Having said that, we did clean the plate.

Next up, we ordered a second drink and I was thrilled to see that they offered the Hungarian wine variety, Furmint on the menu which we enjoyed during our trip to Budapest that I wrote up on the blog awhile back.  Crisp and light, it was a lovely wine to pair with the seafood centric meal we were enjoying.

The balance of Waypoint’s large menu includes a variety of pizzas ($16-18), pastas ($18-26), roasts to serve 2-3 including bronzino, lamb shoulder, ribeye, chicken and market vegetables ($17-74), and individual plates ($12-19) that are an eclectic mix of salads, more seafood selections such as wood grilled octopus, striped bass, and even the Waypoint (WP) burger.  If you can’t find something on this menu, I can’t imagine finding something anywhere else quite frankly!

Next up, we took a recommendation from my friend, Kris Ann who also ordered the Lobster Cacio e Pepe which is one of my favorite preparations if you remember this recipe from the blog.  Whole wheat pasta is coated with the most luscious butter infused with koji, which I had never enjoyed before but is essentially a type of fungus used in fermentation and produces a umami or a sweet & salty note that is amazing.  The pasta is sprinkled with pecorino and silky lobster meat.  This dish was outstanding and I would go back to Waypoint just to enjoy it again… 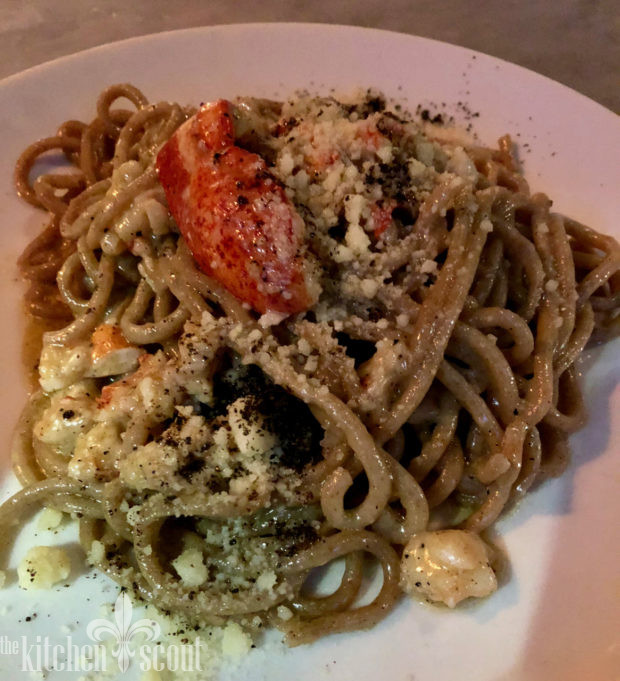 and a better look from Insta… 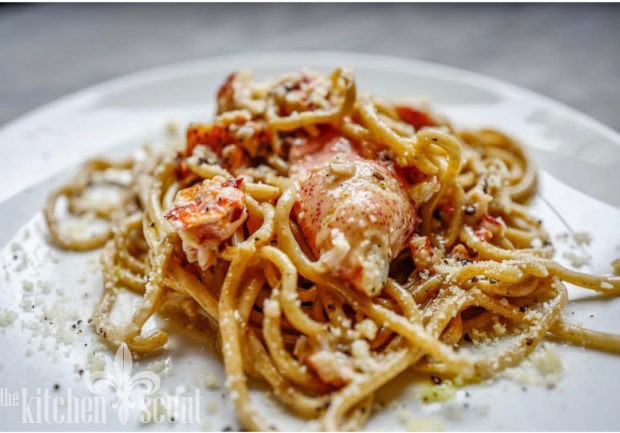 We ordered one last dish, The Grilled Shrimp Pizza that did not skimp on ingredients.  Plump and juicy shrimp were nestled among fried shishito peppers, corn crema and cotija cheese.  The dish inspires me to add grilled shrimp to my Mexican Street Corn Salad next time I make it!  The pizza was topped with a grilled lime that we squeezed over the top – delicious and not too heavy at all… 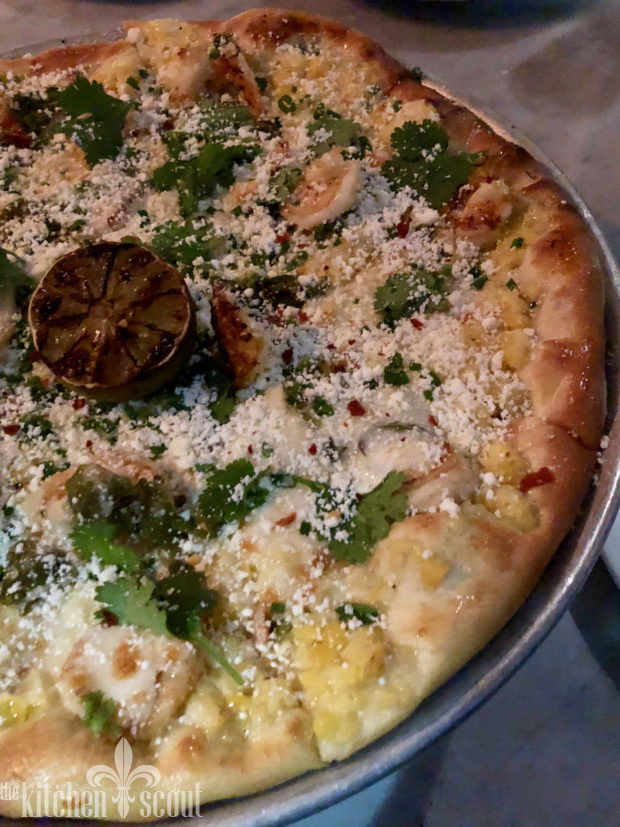 My only real complaint is that after he took our order, our server was not as attentive and timely with us.  We did ask to see the dessert menu as my friend had mentioned the cinnamon donuts with chocolate dipping sauce were delicious and as you may recall from my interview with Karen Collins of Bisousweet Confections, I am a huge fan of cinnamon donuts.  Sadly, he didn’t return to see if we wanted to order anything for quite awhile and by then we were ready to call it a night.  I will just have to plan a return trip to Waypoint to grab some of those donuts!

I hope you get a chance to visit Waypoint sometime soon.  Please report back if you do – I’d love to hear from you.

As a footnote, it has been awhile since I have posted a restaurant review on the blog.  Looking back over the past year, I have posted only about half a dozen.  Let me share my philosophy with you about reviewing restaurants here on The Kitchen Scout.

I want this space to be positive and encouraging, similar to the vibe you might feel if you are watching Chronicle here in Massachusetts for example when they feature local eateries and retail shops.  I am not a paid critic and have no vested interest in harming someone’s livelihood, so if for some reason I have a mediocre dining experience on one of my scouting missions, I am just going to leave it alone and not share it here on the blog.

My interest with The Kitchen Scout is presenting you with places that you should want to visit, rather than slamming restaurants that fell short of expectations.  That’s not to say I won’t point out issues with our experiences, but a restaurant is not going to make it onto the blog unless I think you would enjoy yourself there too.

I want to also mention something else in the vein of full disclosure.  Even though today’s restaurant doesn’t qualify as a hidden gem, I am trying to find more of the small places to share with you.  I would love to help out some of these smaller places that may not have the budget for a publicist.  Would that be of interest to you?  I hope so.

One Year Ago:  Fusilli with Eggplant, Fresh Tomatoes and Parsley 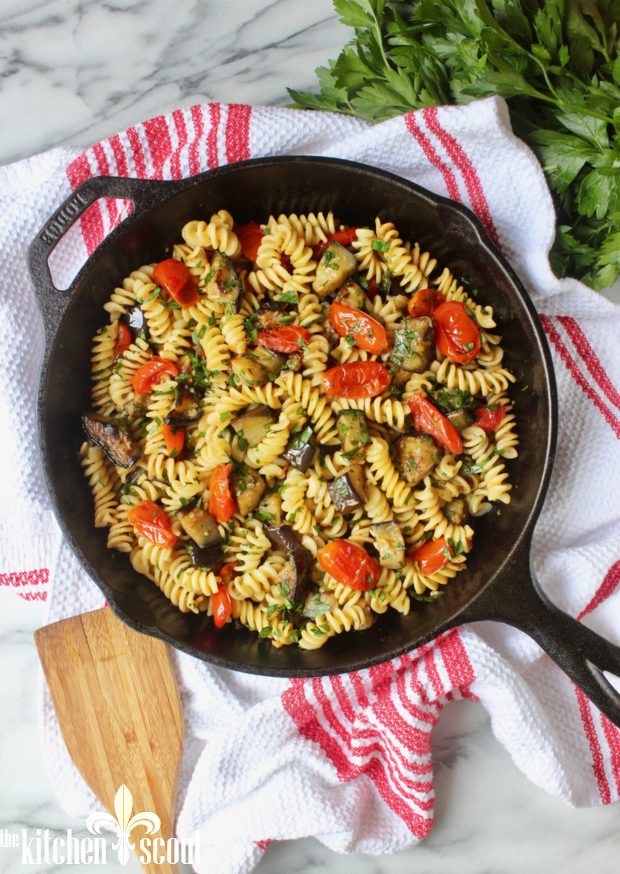 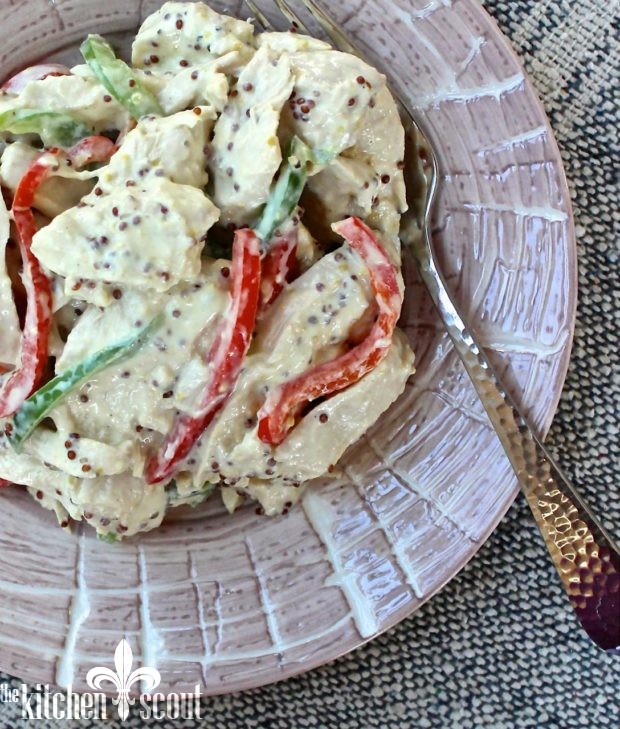 Three Years Ago:  Fettuccine with Fresh Corn Pesto and Bacon 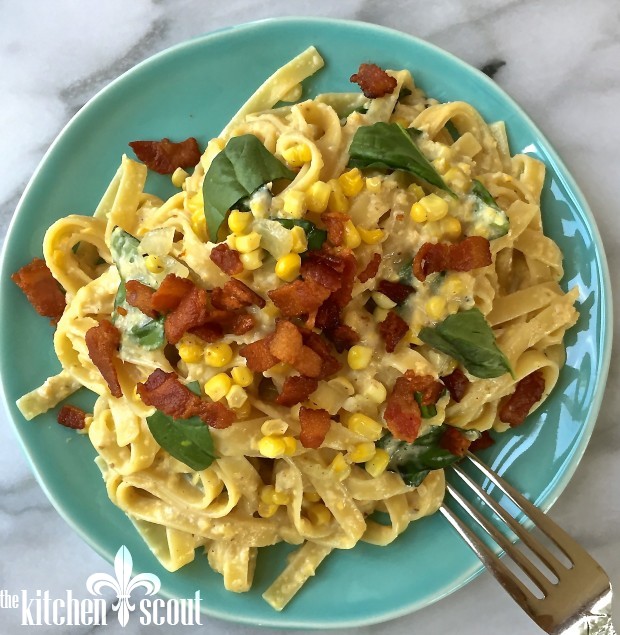 Four Years Ago:  Back To School Guacamole 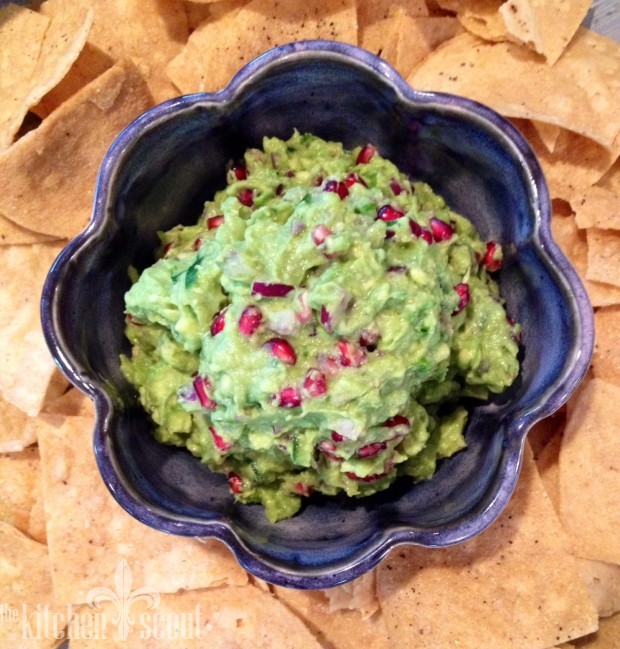