My husband recently treated me to a weekend in NYC for a combination Valentine’s and Birthday celebration.

Since it was my birthday (and a big one at that), I got to pick the hotel and our activities.  As a result and with the exception of our magical visit to the Frick Collection, it was essentially a food crawl!

I first visited New York in 1982.  My mother and I spent a glorious weekend together shopping, dining and seeing two Broadway shows, Evita and Amadeus.  It was my high school graduation gift and I still have the playbills and the matchbooks from the trip!  I’ve returned to New York several times since 1982, but not for an entire weekend with just my husband.  I was really looking forward to it!

We stayed at the Trump Soho which had a fabulous location on Spring Street, close to shopping and dining.  The hotel was sophisticated and modern with a friendly and attentive staff.  Our room was well appointed and had an incredible view of Manhattan.  Yet, I am still scratching me head about the fact that there wasn’t a door separating the bathroom and living space, just an open doorway.  And why wouldn’t you have a bathroom on the same floor as the health club?  Just saying.  We ate lunch upon arriving, and two breakfasts all via room service (the best option it appeared) and the food was both beautifully presented and delicious.

Anyway, my husband and I love to go for long walks when we travel.  It helps us to orient ourselves, check out what’s in the neighborhood and get some exercise.  Our first stop was in the West Village at a store called Bonnie Slotnick Cookbooks.  Bonnie collects out-of-print and antiquarian cookbooks.  Located in a brownstone on West Tenth Street, it’s a very small space and stacked to the brim with interesting finds organized by category.  If you are looking for a long lost book, or for some inspiration, this is a fun place to visit. 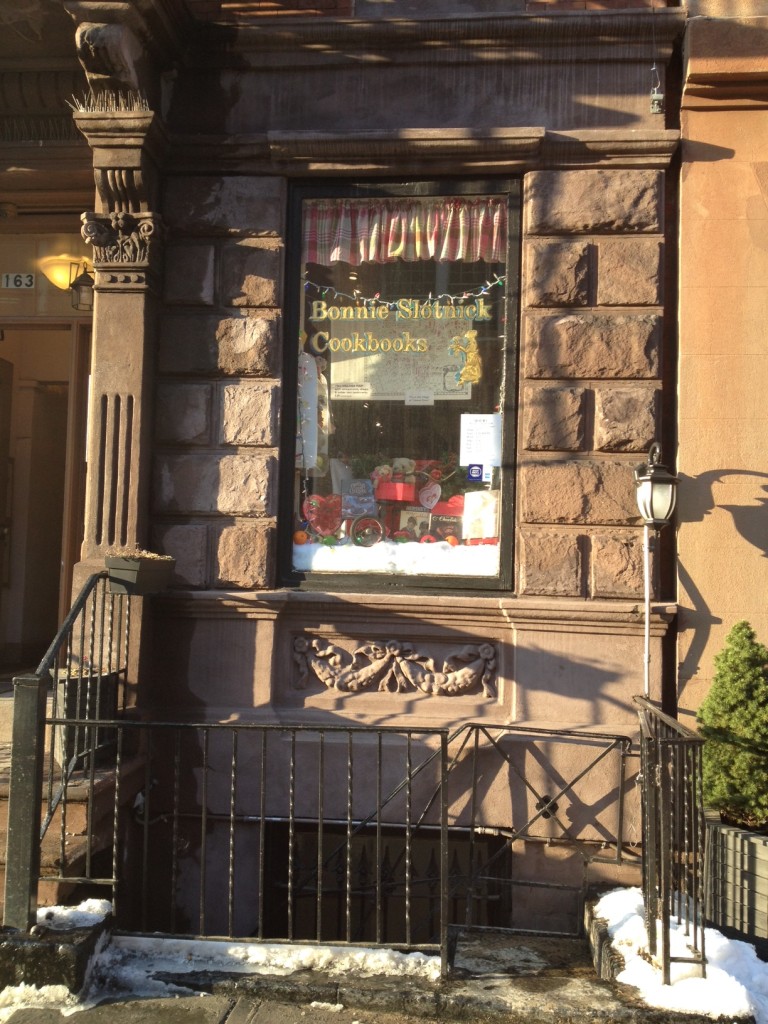 For a bit, it was just me, the hubs and Bonnie in the cozy store, but eventually a few more people showed up.  When I thought I was finished browsing, I returned to where my husband was passing the time on his crackberry.  As I glanced above him, there was a section titled Middle East that I hadn’t noticed before.  I found a little treasure, a book called Dinner at Omar Khayyam’s, written in 1944 by George Mardikian and named for his San Francisco restaurant.  The cookbook had a forward written by William Saroyan and was a signed copy originally owned by Mary Jane Pool, the former Editor in Chief of House & Garden magazine.  Cool!  As I approached Bonnie to purchase the book I thought to myself, she probably thought this book would never sell!  Sure enough, she asked me why I had chosen it and I told her I was Armenian and there was a recipe in the book for a soup my grandmother used to make that I had never seen a recipe for in other cookbooks.  Here is a picture of the front: 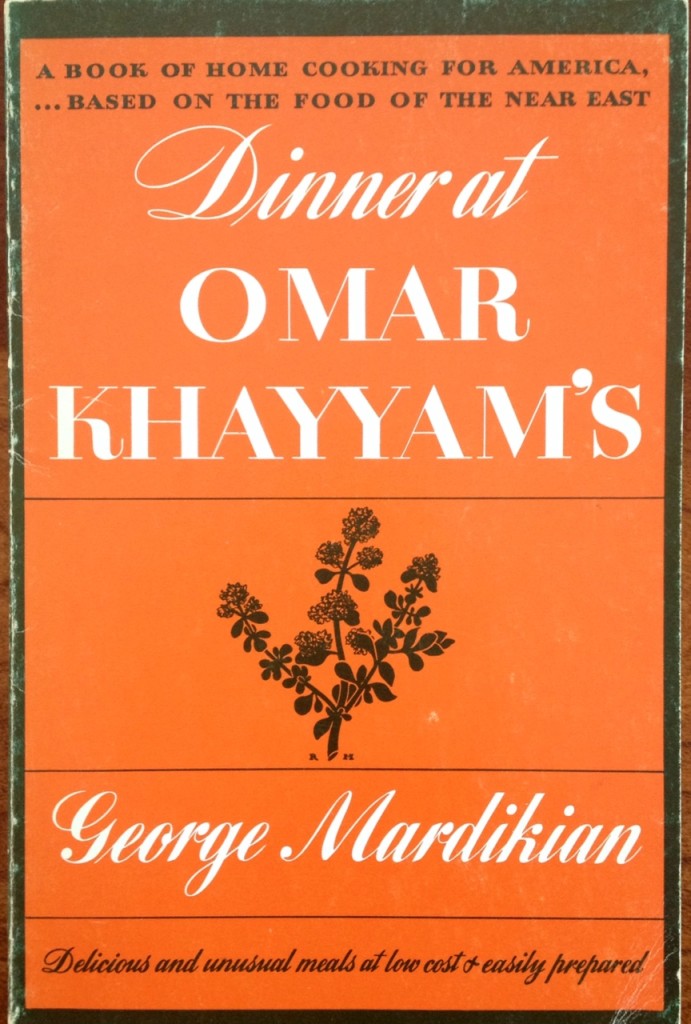 Our next stop was the Laduree back in Soho.  Our older daughter has a love affair going with their coffee macaroons.  This passion almost made us miss a flight home from Paris once, but let’s not go there.   She had only been at college for a couple of weeks so we wanted to surprise her with some treats.  The hotel mailed the little delectables to our little darling at her new school and life was good!

Next stop, cocktails and appetizers at The Dutch NYC, one of the restaurants owned by the NoHo Hospitality Group.  We sat at a very cozy bar that was hopping with many guests.  My idea of a celebration cocktail is a glass of champagne so this is how things started.  Of course, it was pink for Valentine’s Day! 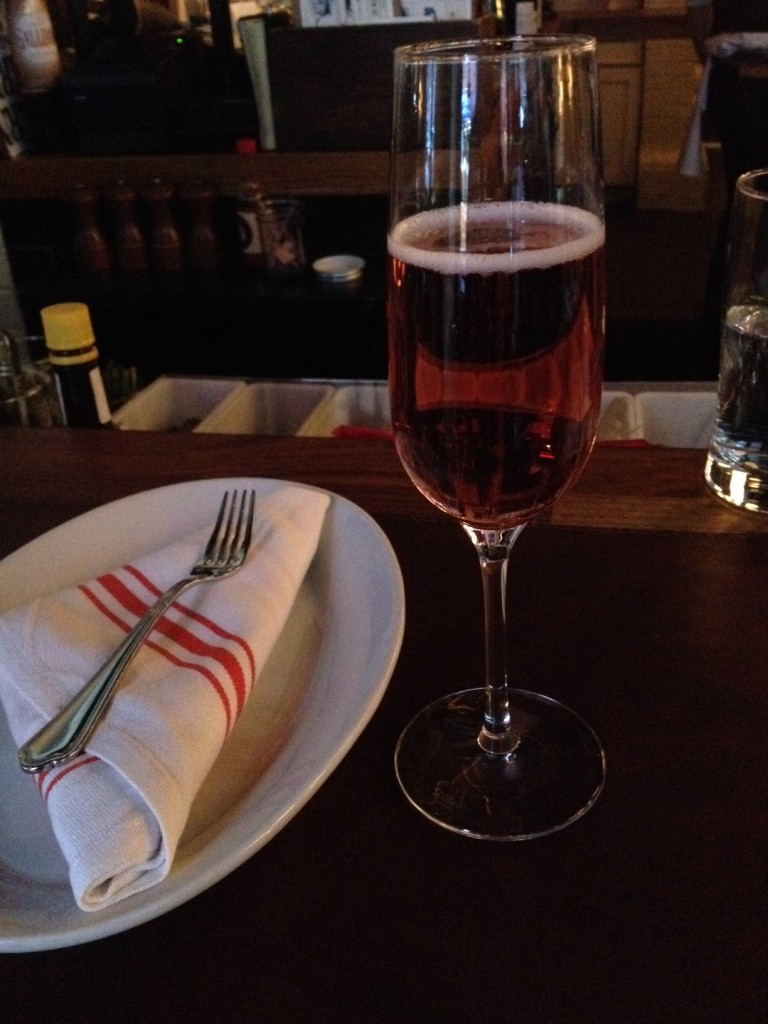 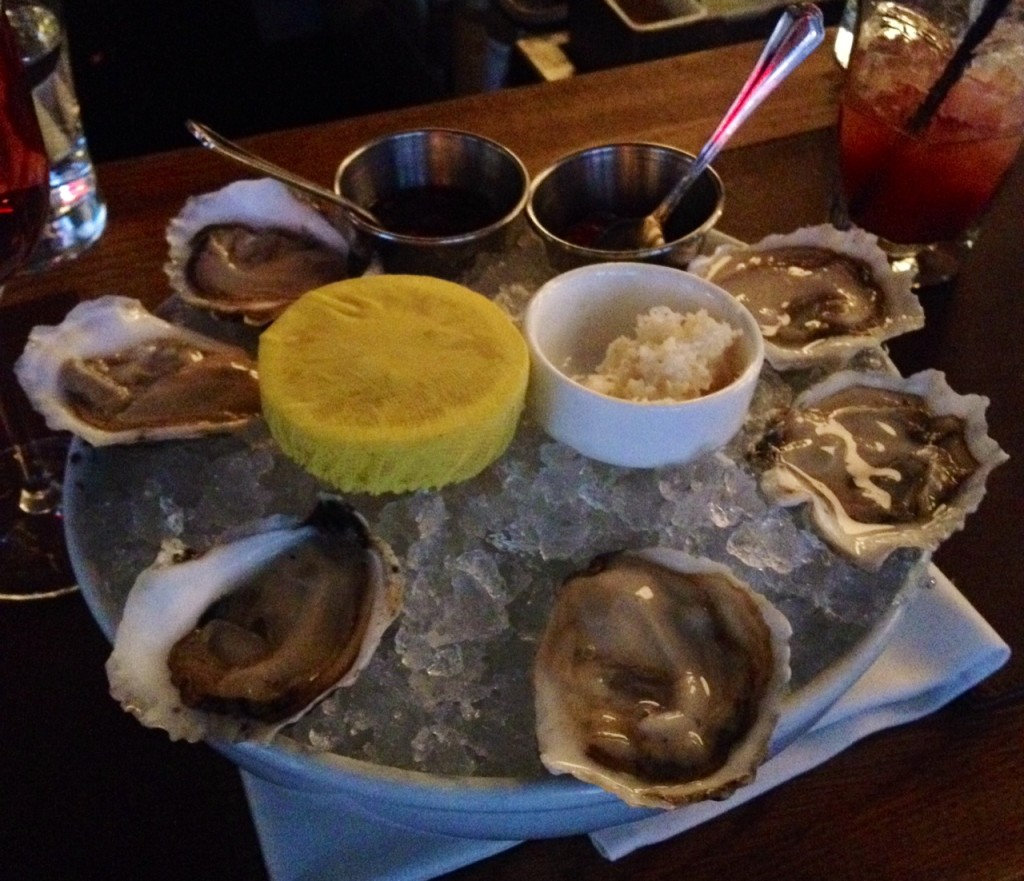 and a smoky eggplant dip… 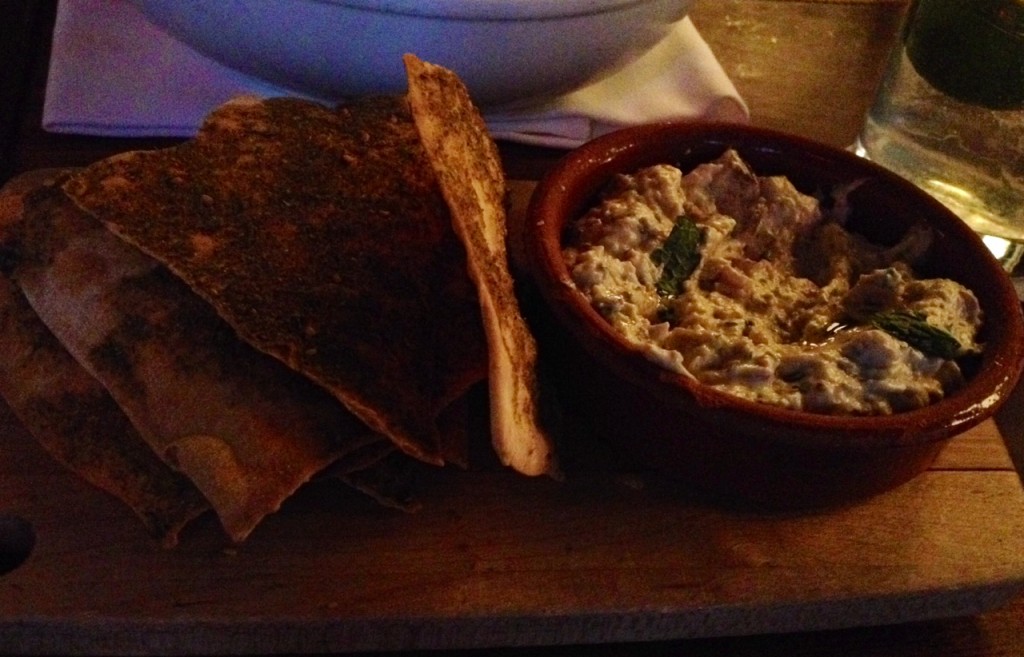 I was one and done with my pink champagne, but didn’t want to move to wine.  The bartender suggested a Slyboro “Hidden Star” semi-dry sparkling cider, brewed in New York state.  Hidden Star is a blend of Northern Spy and Liberty apples and is clean and crisp.  It was absolutely perfect.

A few hours later we found ourselves at Craft restaurant on East 19th.  Craft is owned by Tom Colicchio of Top Chef fame (I do not watch this show although I know it’s a fan favorite).  The restaurant was elegant chic and the service was very attentive, with dishes described with great detail ahead of ordering.  Our meal was very good.  Two of the dishes we had are shown here, an orrechiette with a pork ragu with poblano peppers and tomatillos, and a pork belly cured and fried served with ramps and yogurt. 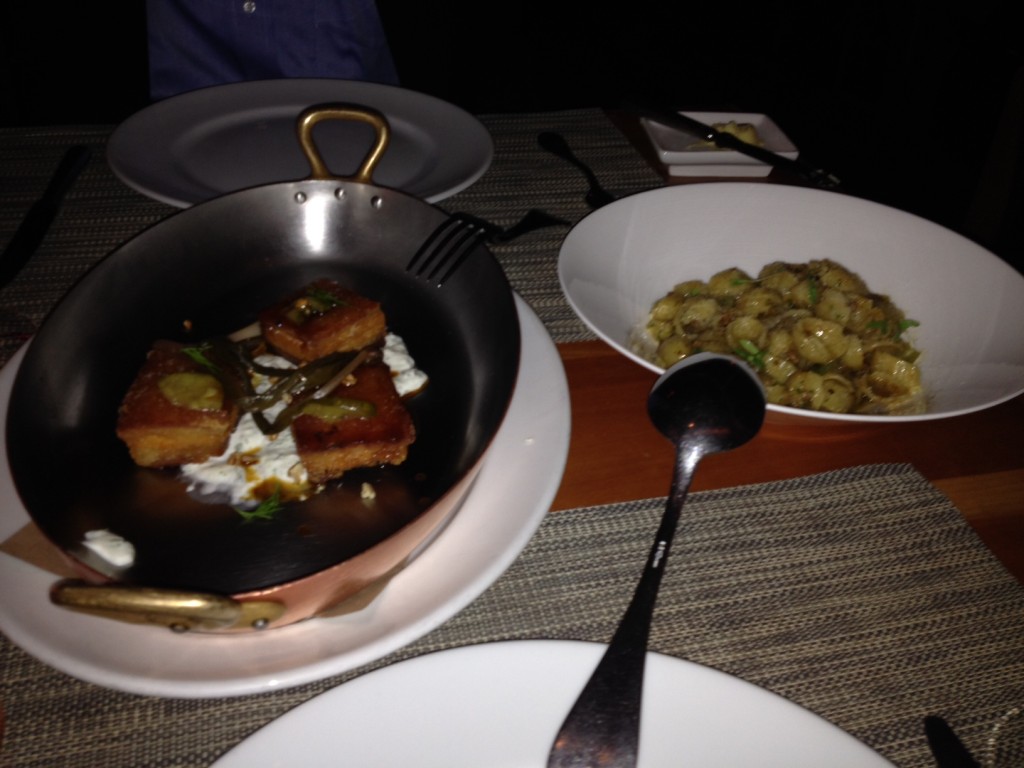 But the highlight of this meal was definitely dessert.  Warm, house made sugar donuts were served with warm chocolate and caramel sauces.  Yuuuuummmm. 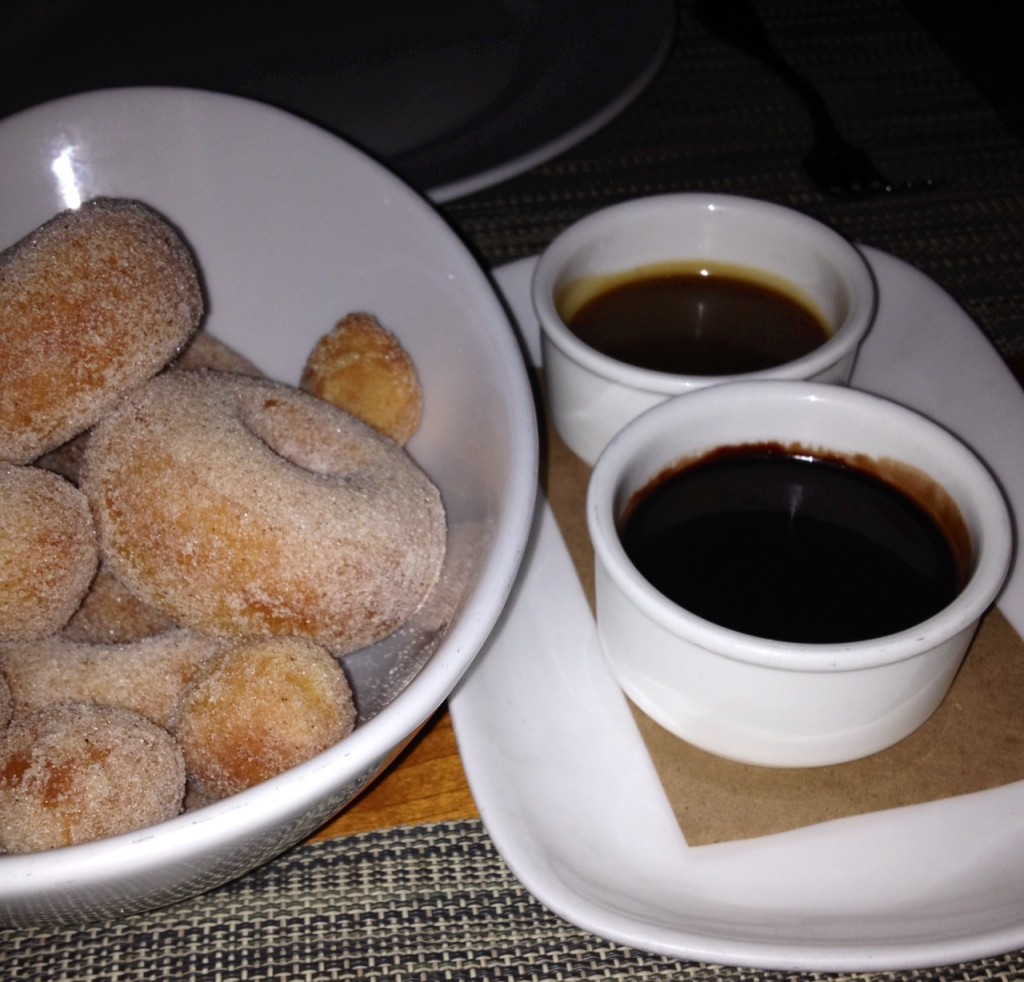 Would I run back to Craft?  No, I don’t think so.  It was an excellent dining experience, but it didn’t blow me away and the options in NYC are endless!

Day one was complete and it was time for some shut-eye.