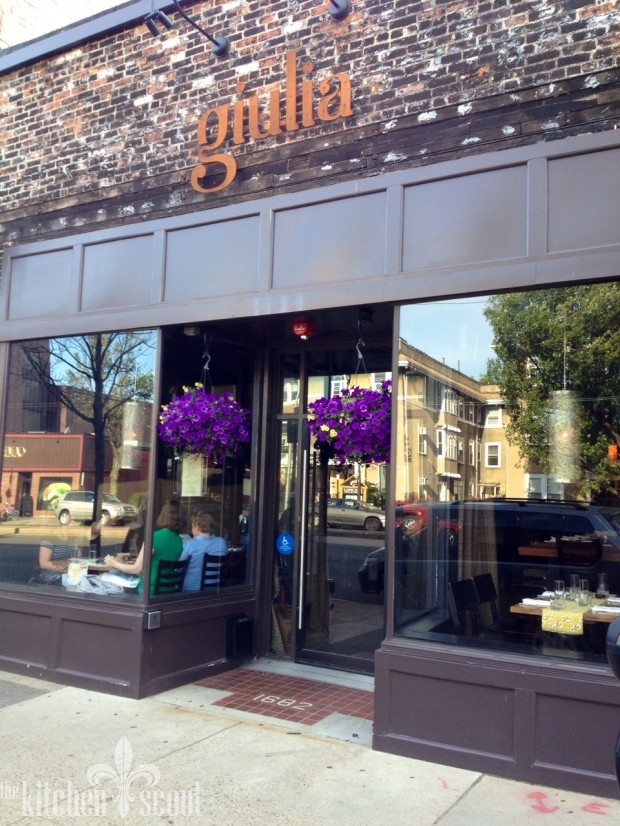 Walking into Giulia, the first thing I think about is my honeymoon in Italy. My husband and I got caught in a torrential downpour that led to one of the most amazing lunches of our newly married life.  We took shelter in a cozy restaurant called Il Fondaccio in Castellina in Chianti, which had the most extensive and mouth watering antipasto table we had ever seen at the time.  Il Fondaccio’s walls were stone and brick as it was set in the lowest level of a 13th century cantina that was originally used as stables. In any case, the lighting was warm and welcoming, atmosphere was very friendly and of course, the food was delicious.  My husband remembers UB40 was playing in the background. We still talk about that meal so many years later.

Located on Massachusetts Avenue in Cambridge, between Porter and Harvard Squares, Giulia has an authenticity about it that you also feel immediately.  Brick walls are accented with beadboard, the tables are rustic and each is adorned with a unique fabric runner.  One side of the long, rectangular space is almost completely bar where there is spacious seating for about 18 and looks like a great place to come alone or with a friend or two.  At the back of the restaurant is an open kitchen and the much talked about “pasta table” where the chefs make fresh pastas on a daily basis.  At night, this table for twelve hosts diners, communally or in one large group.

On the Monday night my friend, Jane, and I enjoyed a meal at Giulia, there weren’t any guests at the pasta table as yet, but the restaurant was quite full and in the past, I have had difficulty getting a reservation so plan ahead.  Groups of girlfriends, younger and older couples were all represented on this particular night, a testimony to the restaurant’s broad appeal.

Maybe one of the things I liked best about Giulia is that they are still doing things the old school way – word of mouth. Giulia has a Facebook page – with one post from the day they opened in December of 2012.  No Giulia Instagram or Twitter except the owner’s personal account.  Subscribing to the notion of “if you are good, people will find you”, has clearly worked for Giulia.

Giulia is owned by husband and wife, Michael Pagliarini and Pamela Ralston.  Michael is the former Executive Chef for Michael Schlow’s Via Matta in Boston Back Bay where he was recognized by Star Chefs magazine as a “Rising Star”, one of only 6 chefs in greater Boston to be honored as such.  As the story goes, the restaurant was named for via Giulia in Rome, the street Michael and Paula were on at the moment they decided to open the restaurant, their first together.

Put simply, they are bringing the old world of thoughtfully crafted, accessible Italian food and superior hospitality to their guests.

After we ordered, our waiter kindly advised us we had requested “a lot of food”, but we went with big appetites and knew we would be more than happy to take some extra food home.  We were very game to get as much of the Giulia experience as possible.

To begin, we ordered two sfizzis.

The warm semolina cakes with parmiagiano crema and crispy proscuitto… 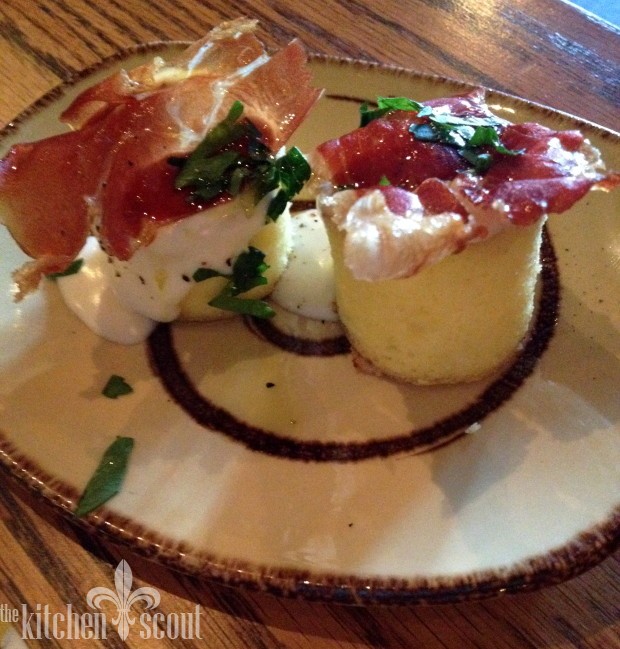 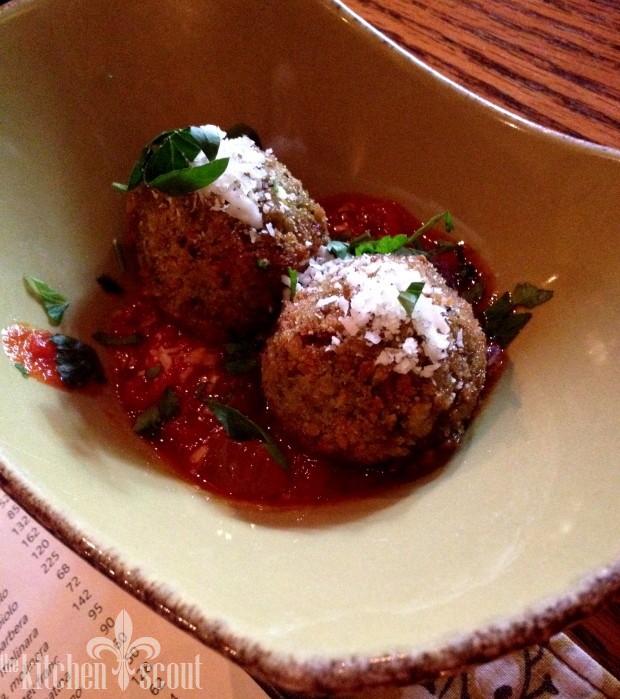 These dishes were not only gorgeous to look at, but completely delicious.  The semolina cakes were firm but light and the crema and crispy proscuitto were a contrast in textures that worked so well together.  The arancini were seasoned perfectly and just looking at the picture is making me hungry for them all over again.  Light and flavorful, this dish was very generous in its portion size. For $5 a dish, the sfizzis are not to be missed.  Other options included a crostini of the day (chicken liver) and marinated olives & almonds among others.

Next up was the antipasti di magro… 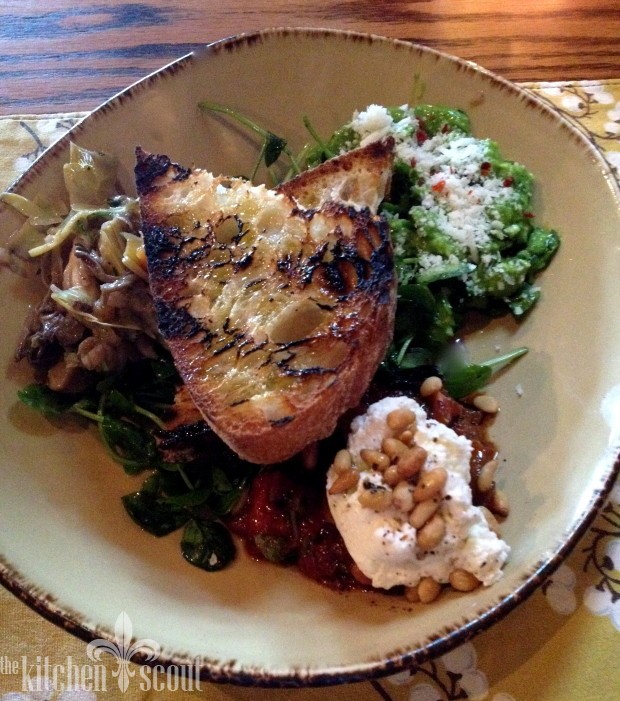 We were in love with every element of this dish.  The housemade bread was sliced and grilled to perfection.  Roasted eggplant, housemade ricotta topped with pine nuts, a combination of wild mushrooms and artichokes and a fava bean puree topped with freshly grated pecorino and Aleppo pepper were served alongside.  This plate probably represented the restaurant’s culinary perspective the best and was reminiscent of my honeymoon antipasto lunch at il Fondaccio.  Fresh, seasonal ingredients, prepared with the best extra virgin olive oil and seasonings to delight the palate.  If this was the only way to eat, I would be ok with that.  There wasn’t a drop left on the plate. Other antipasto options included salads, burrata, oysters and tiny clams “in brodetto”.

This is also the point in the evening where Jane was clever enough to discover that if she put the flashlight on her iPhone above the food while I took the picture using my iPhone, we actually got shots that were blog worthy. Thank you, Jane!

We split two pasta dishes.  First up was the Fusilli Integrale which was prepared one of my favorite ways, the Roman ‘cacio e pepe’ (cheese and pepper) and accented with asparagus, spring onions and proscuitto. 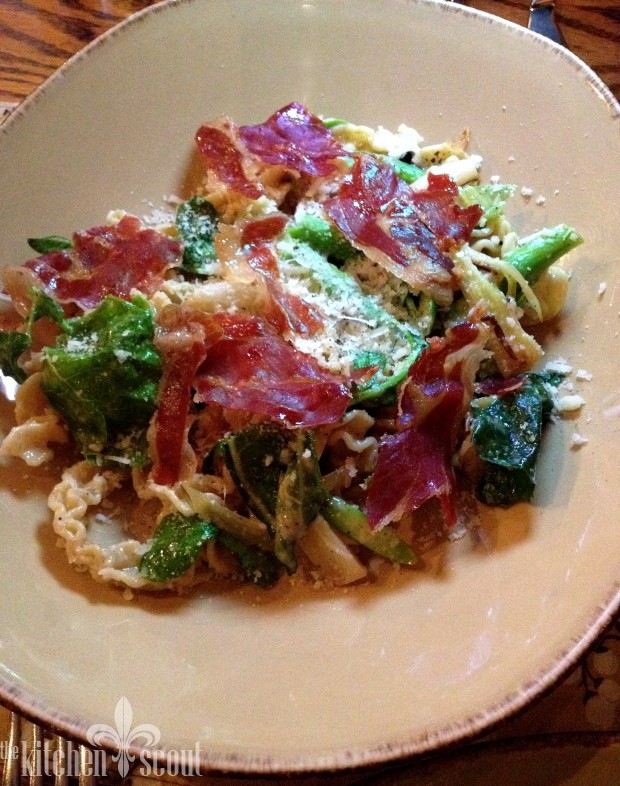 Don’t you want to dive into that pasta?  Look at the texture of the homemade fusilli. Fabulous.  We also enjoyed an item that has been on the menu for a long time – roasted veal breast and sweetbread ravioli with swiss chard, tomato sugo and parmigiano. 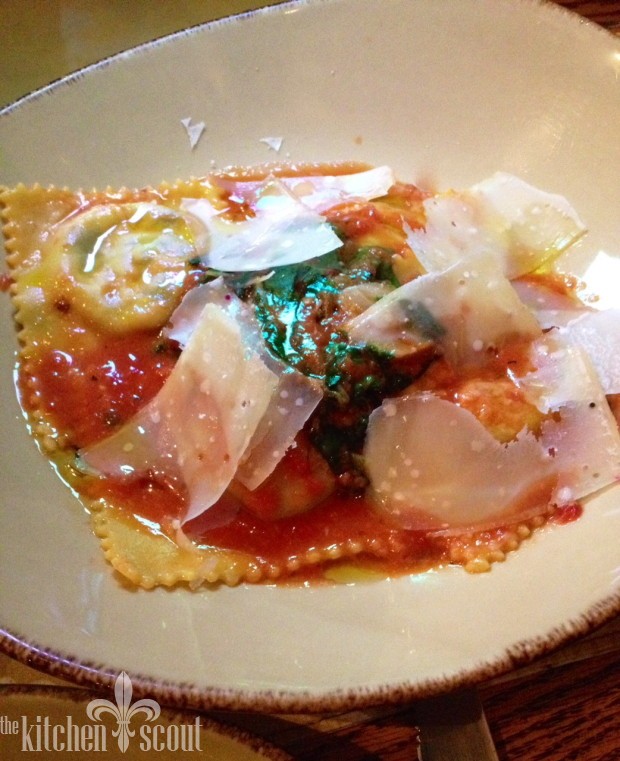 Tender pasta sheets filled with a rich, but not overwhelming filling and accented with the lightest of tomato sauces.  Comfort food at its best.

We stopped about half-way through the pastas as we needed to save room for our entrees, half of which we also took home.

First up for Jane was the pan-roasted east coast halibut that was served with a mushroom risotto, peas and pickled ramps… 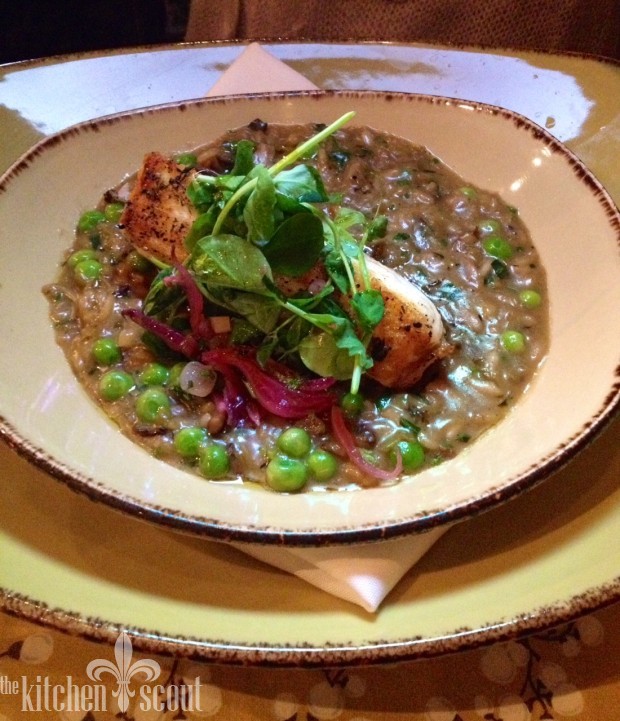 And finally, the grilled bone-in rib eye with lemon, sea salt and salsa verde for me… 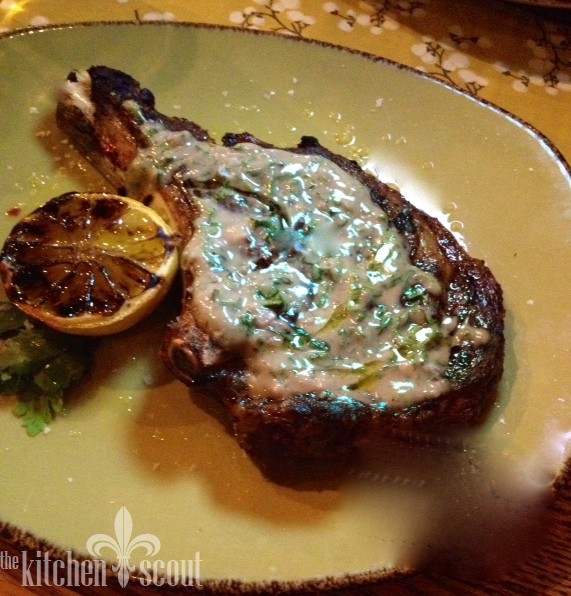 Jane thought her dish was very flavorful and the elements worked well together – creamy risotto and the pan seared, succulent fish. My dish was the only one I could find fault with and only because it was undercooked to my liking.  I didn’t send it back though as the flavors were wonderful.  Other entrees included a wild striped bass, a house-made lamb sausage and a free-range spring chicken.  Side dishes consisted of Umbrian lentils (a nod to Michael’s Umbrian roots), brussels sprouts and a local farm pick of the day.

Overall, service was superb.  Our server was very knowledgable about the menu and patient with our many questions.  Because we ordered so much, it also gave us a good sense of the pace of the kitchen.  The dishes came out at well-timed intervals so we never felt rushed to finish a course before we could photograph and casually enjoy our selections.

Assistant General Manager, Nicole Keane was delightful at the front of the house and throughout the evening.

Here are my thoughts on Giulia.  Please go here.  You will have a beautiful meal that will allow you to experience authentic Italian food as it was meant to be prepared.  Do not miss the sfizzi which are an excellent value or the pastas as they alone would be worth the trip. After reading this review, my husband is probably first in line!

If you do go, please let me know what you think in the comments!  Enjoy!