Artistry on the Green

A modern day Paul Revere, perhaps riding out to Lexington in his Mini Cooper could joyfully alert foodies along the way that the chefs had in fact already arrived to spice up the local culinary scene.

The suburbs west of Boston are finally getting their due.  Towns such as Lexington and Concord are fast becoming destinations for sophisticated diners. During the past couple of years, several new restaurants armed with top notch chefs have opened with great success and more are on their way. A recent addition to the Lexington culinary landscape is Artistry on the Green, located in the new luxury boutique Inn at Hastings Park.

My cousins and I recently dined at Artistry, a quiet and stylish restaurant which, for our tastes, delivered a solid meal and dining experience from start to finish.  The only bummer? The Boston Globe’s Devra First beat me to the restaurant review this past Wednesday.  Her review of the food was more critical than mine (and we are a tough crowd).  I guess you will just have to go to Artistry yourselves and let me know what you think, ok?

Opened earlier this year, the Inn and Artistry on the Green are owned by Le Cordon Bleu trained and Harvard Business School educated, Trisha Perez Kennealy who also owns Artistry Events and Catering in Boston, and the newly opened AK Bistro, part of speciality foods store, Artistry, in Franklin, Massachusetts.

Artistry’s Executive Chef Mathew Molloy previously worked his magic at Lumiere in Newton, Massachusetts and Beacon Hill Bistro in Boston.  At Artistry, he is creating seasonal menus designed to highlight the best of what local farms and waters have to offer.  On the menu are what the restaurant calls the “Roots of Our Success”, a list of the local purveyors that have contributed to your meal.  The night we visited, these purveyors ranged from Lexington based Wilson Farm (my favorite place to shop for produce) and Bread Obsession, to Concord based Pete and Jen’s Backyard Birds and Lucki 7 Livestock in Rodman, New York.

The restaurant’s decor combines contemporary and traditional elements with coffered walls painted in trendy gray and custom made Winsor chairs that were actually comfortable. There is seating for 54 in the dining room.  The bar does not have seating at this time but they are hoping that will change at some point in the future.

I have to admit that when we walked into the restaurant, it felt very quiet and the average age was a bit on the older side.  There wasn’t a happening “vibe” so to speak. Once we were engaged with our server, Pete, and the food, this didn’t feel like a big issue, but I do think the ambiance is one thing the restaurant can work on.

After offering us sparkling or still water and taking our drink orders, Pete brought us some delightful amuse bouche, which he mentioned changes nightly.  Ramp and Gruyere Gougere lightly dusted with powdered sugar were outstanding. Gruyere makes me happy. My cousin, Kelly, a former pastry chef, referred to them as “little pillows of happiness”.  Kelly was very creative with her food descriptions throughout the evening. 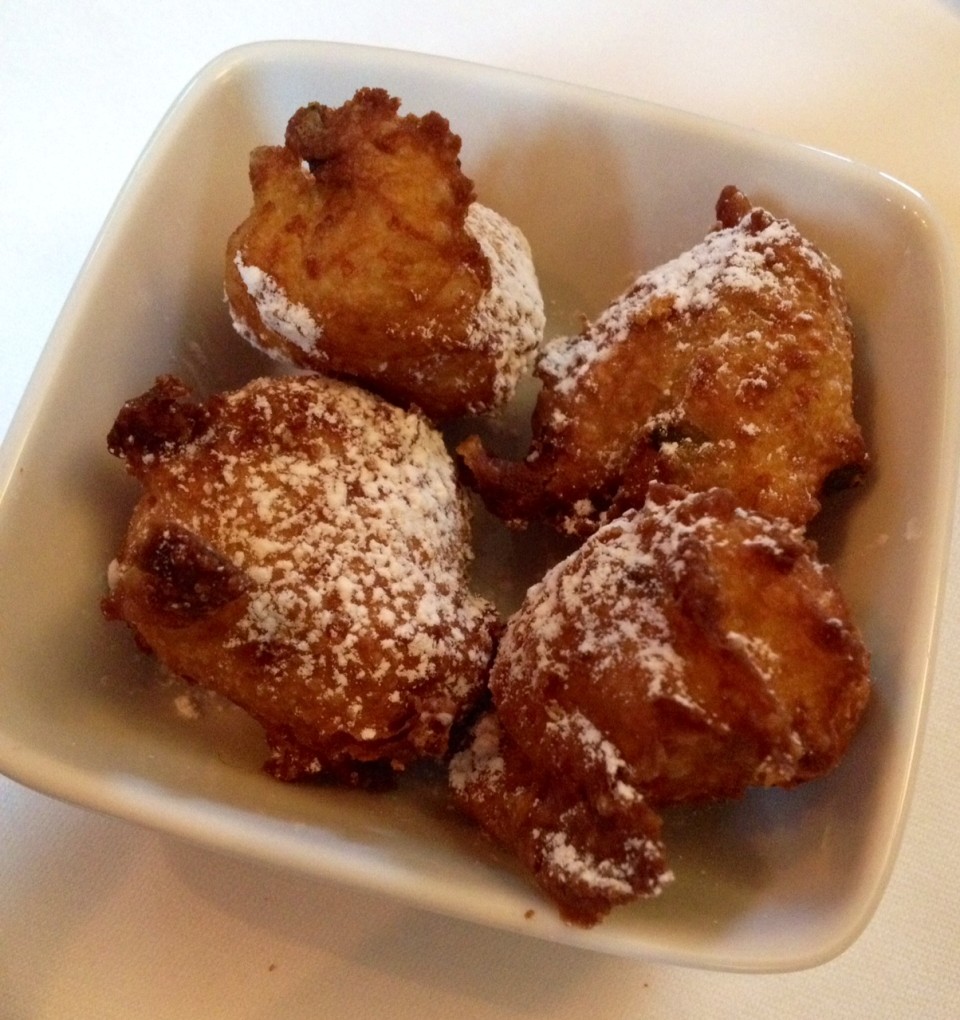 We ate the gougeres so quickly, we forgot to get a picture.  Pete brought us another plate to photograph.  Of course, we ate those too, lucky us!

For our appetizers, the four of us shared two Arugula salads.  The portions were generous and the salad was studded with roasted beets, radish, fine herbes, candied walnuts and dressed with a mustard vinaigrette.  The vinaigrette was a touch salty, but we loved it – there wasn’t a fine herbe left on any of our plates. 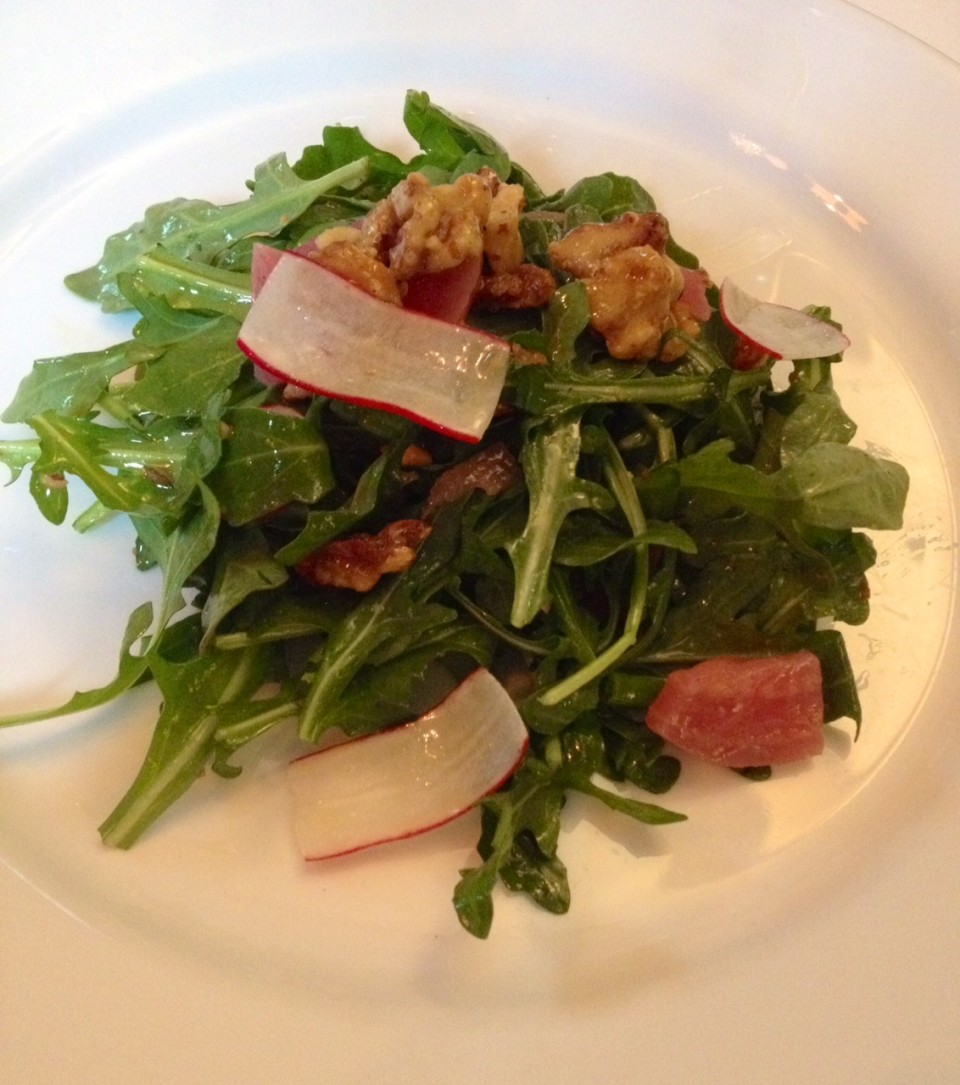 My cousin, Karen, ordered the Watercress Vichyssoise that was accented with Citrus Cured Salmon for a salty hit, Radish and Micro Cress.  It was as smooth as silk and very tasty. I thought it was one of the prettiest dishes of the evening. 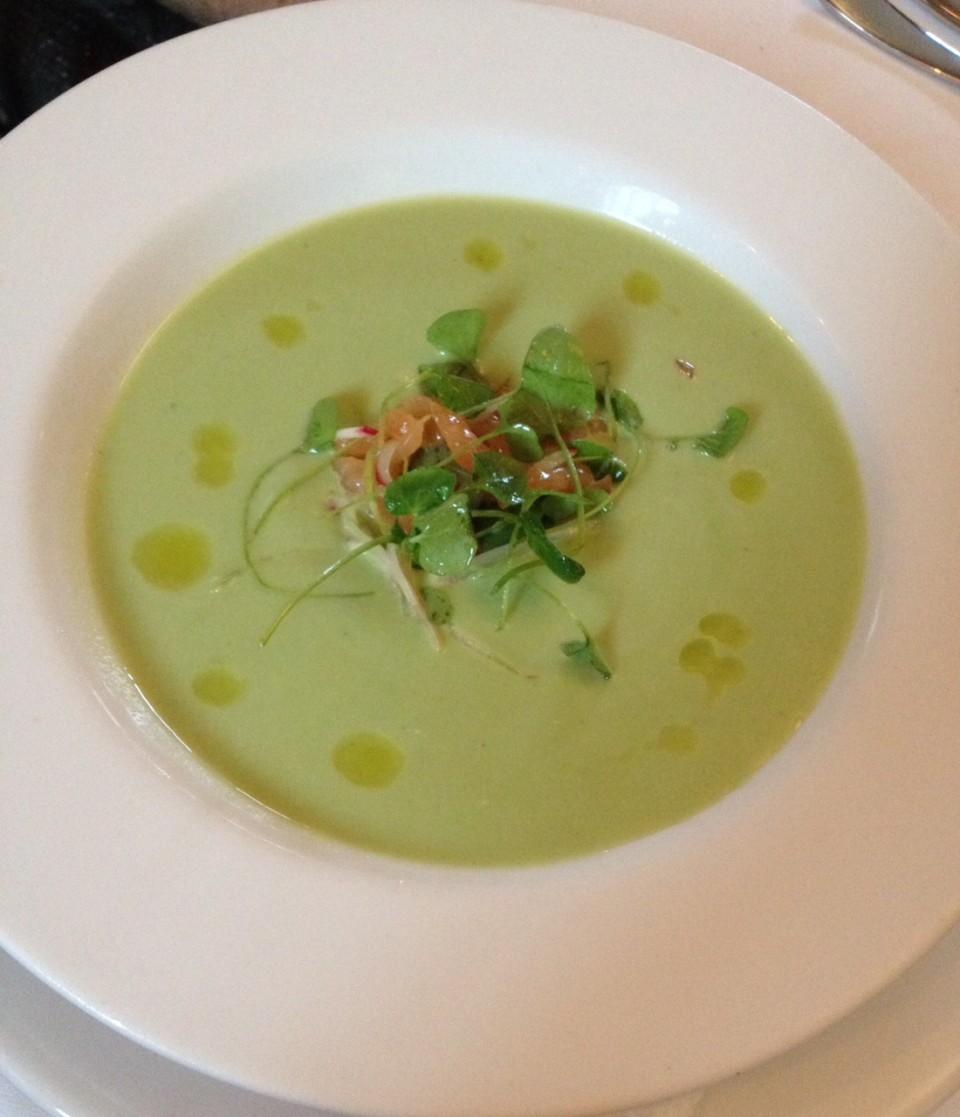 You can check out other appetizers and the menu’s “Casual Classics” which include traditional fare such as Caesar Salad and the Artistry Burger here.

We chose to order from the seven Entrees which offered something for everyone, literally.

First up was the “Cannelloni” ordered by Kelly. 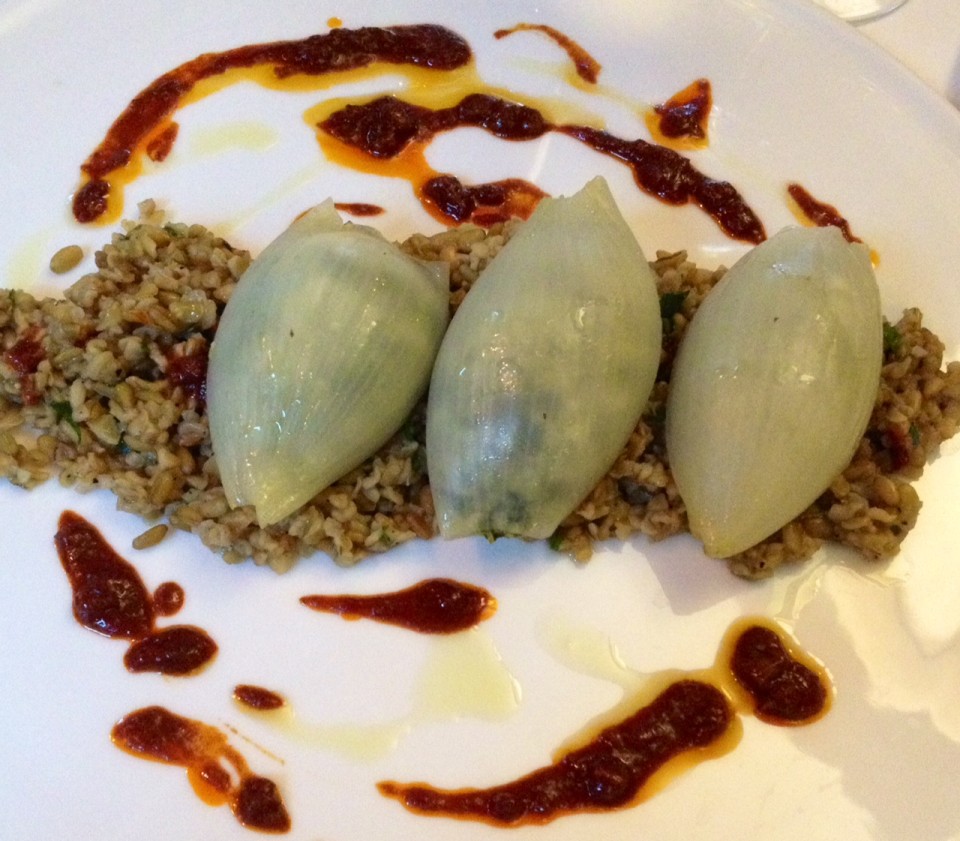 Instead of pasta, roasted onion was used to hold a mixture of fresh ricotta and spinach.  The three “cannelloni” sat on top of Green Wheat Freekeh and were garnished with a Harissa Vinaigrette.  This was such a clever presentation and a wonderful vegetarian and gluten-free option.  Kelly said the dish tasted incredibly fresh as if the cheese had just been made and the spinach just picked from the farm.  The ingredients all worked really well together and the vinaigrette had just the right amount of heat. 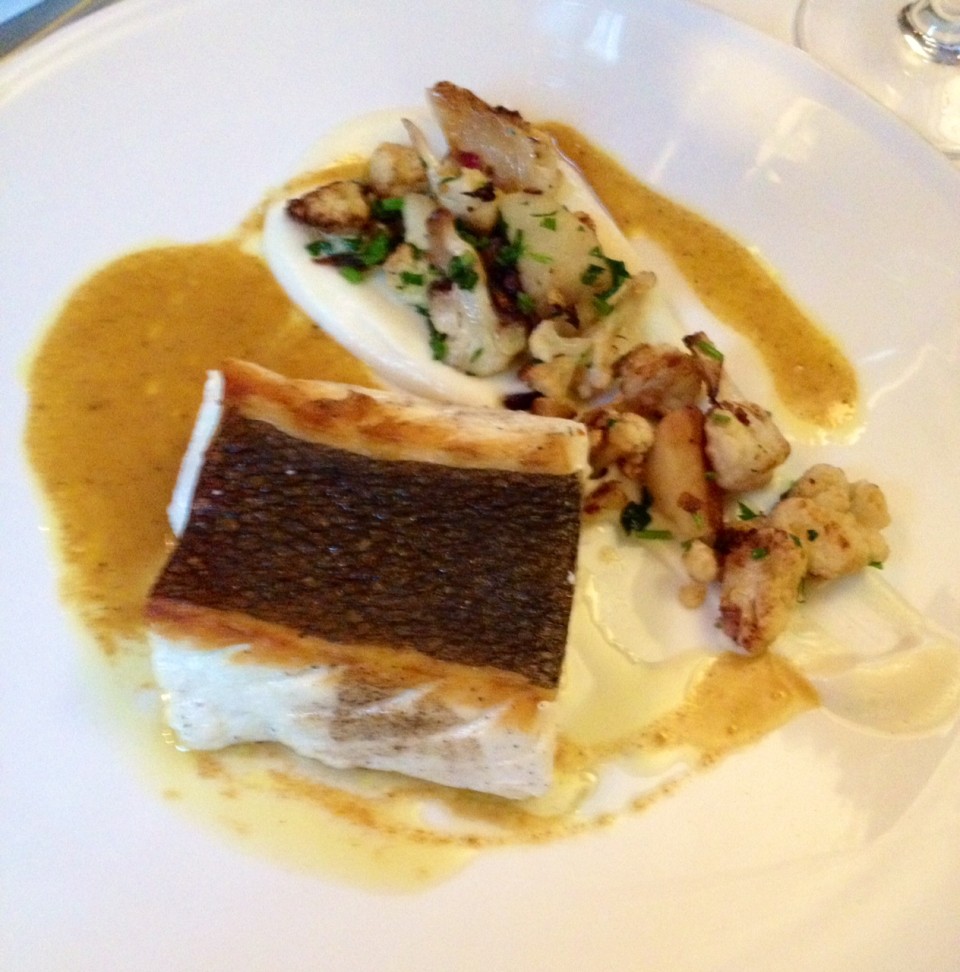 Served with a brown butter curry vinaigrette and some roasted cauliflower, the fish was light, moist and succulent.  The curry sauce did not overpower the dish and served as the perfect complement. 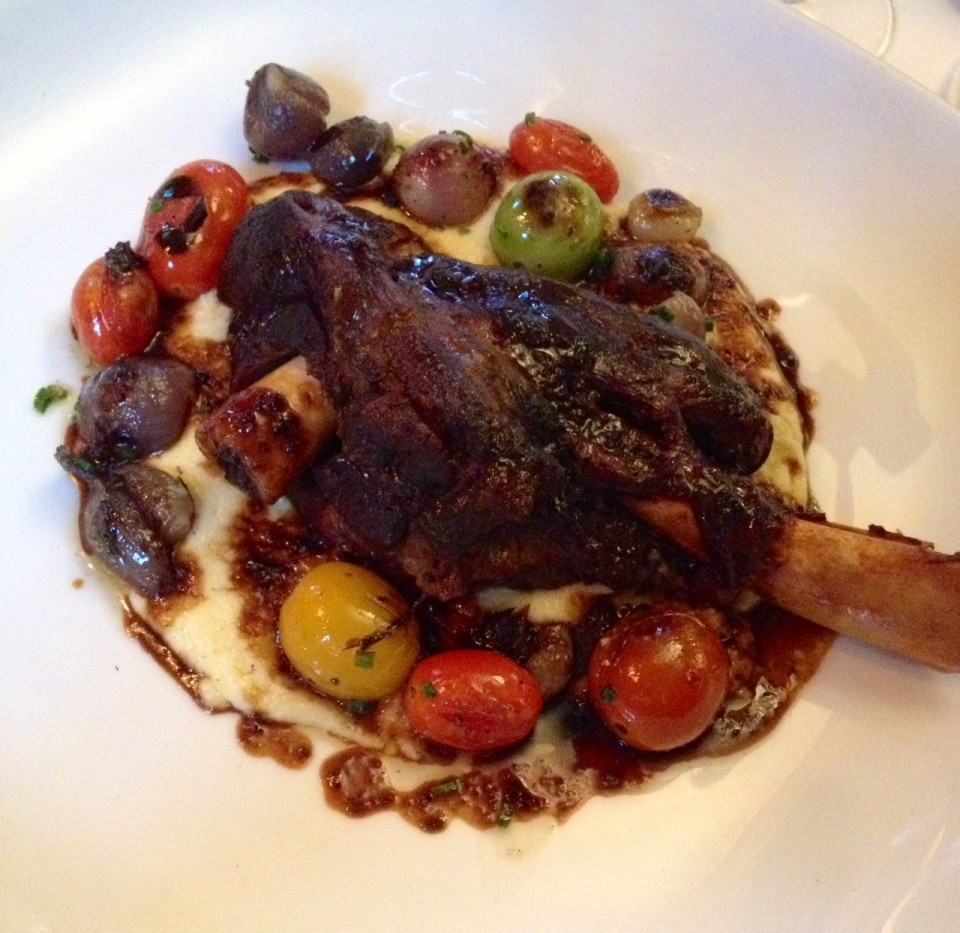 Served over what she felt was the “perfect amount” of polenta and garnished with just burst roasted tomatoes and pearl onions, the meat was incredibly tender and easily fell off the bone.  Karen called me the next day and said it was the first thing she thought about when she woke up – the sign of a good meal! Note that Devra First’s review referred to the lamb shank as “small”, which we thought was an unfair assessment based on the portion Karen was served.

I ordered the Seared Sea Scallops. 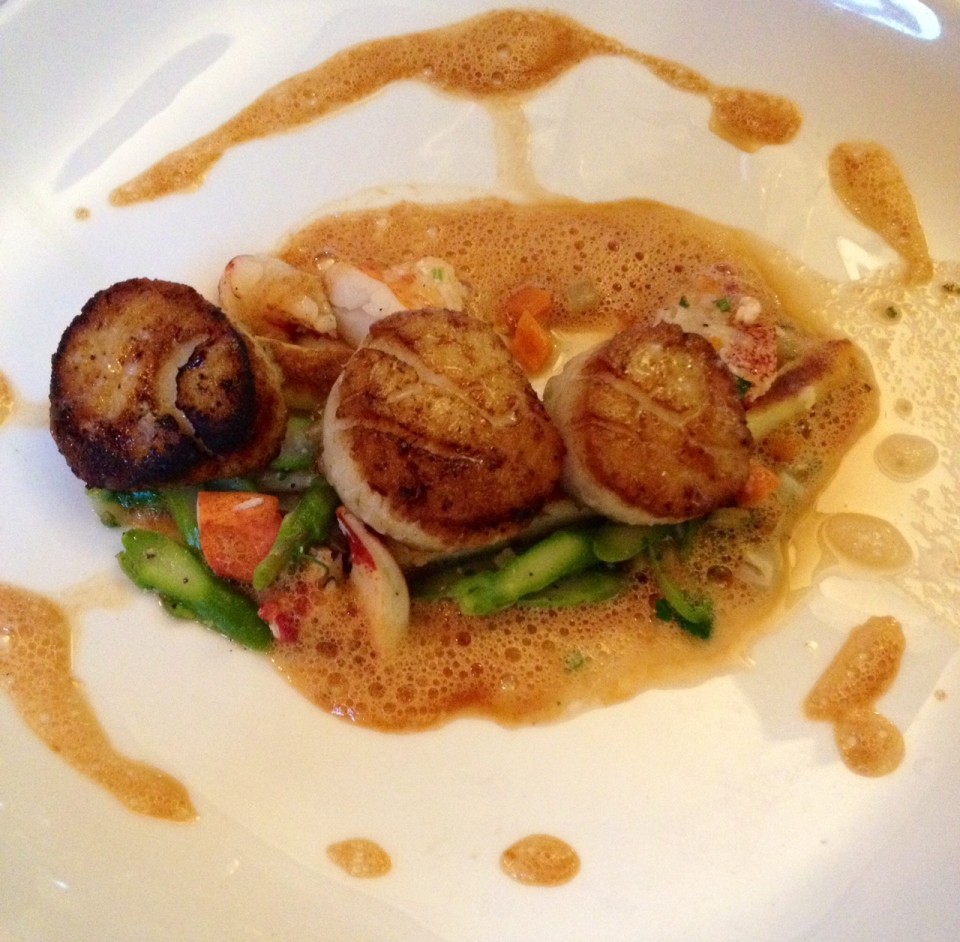 The Scallops were cooked through as I requested and were served with Gnocchi Parisienne (made with choux pastry), Asparagus and Native Lobster Stew. It was outstanding and just the perfect amount of all the elements.

The ONLY thing left on any of our four entree plates was the lamb bone.  I took a picture of one of our empty plates to demonstrate this, but decided you didn’t need to see that!

We ordered two desserts.  I am still dreaming about my selection which highlighted ingredients from Shy Brother’s Farm in Westport, Massachusetts.  Panna Cotta was surrounded by a strawberry-rhubarb compote that was just sweet enough and garnished with an almond oat crumble.  Smooth, tangy, crunchy – this dessert had it all and was a little plate of perfection. 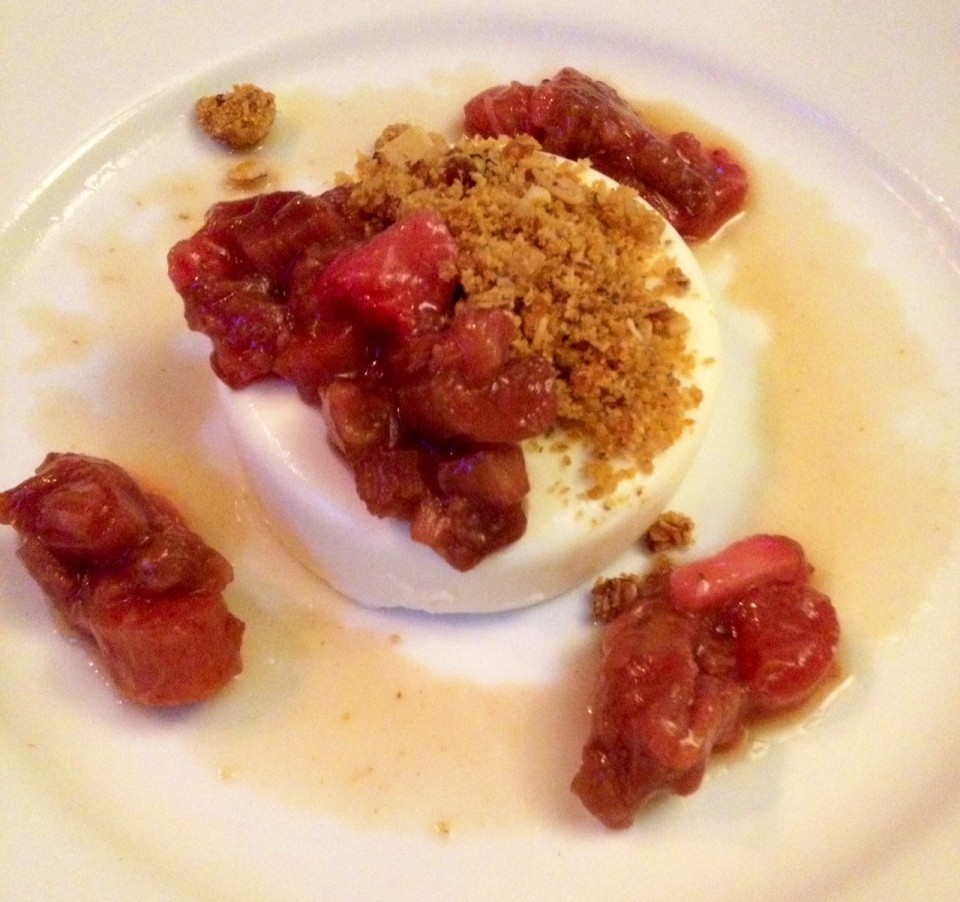 Our second dessert was the Nougat Glace which was served with a raspberry sauce and fresh raspberries.  We didn’t leave a drop. 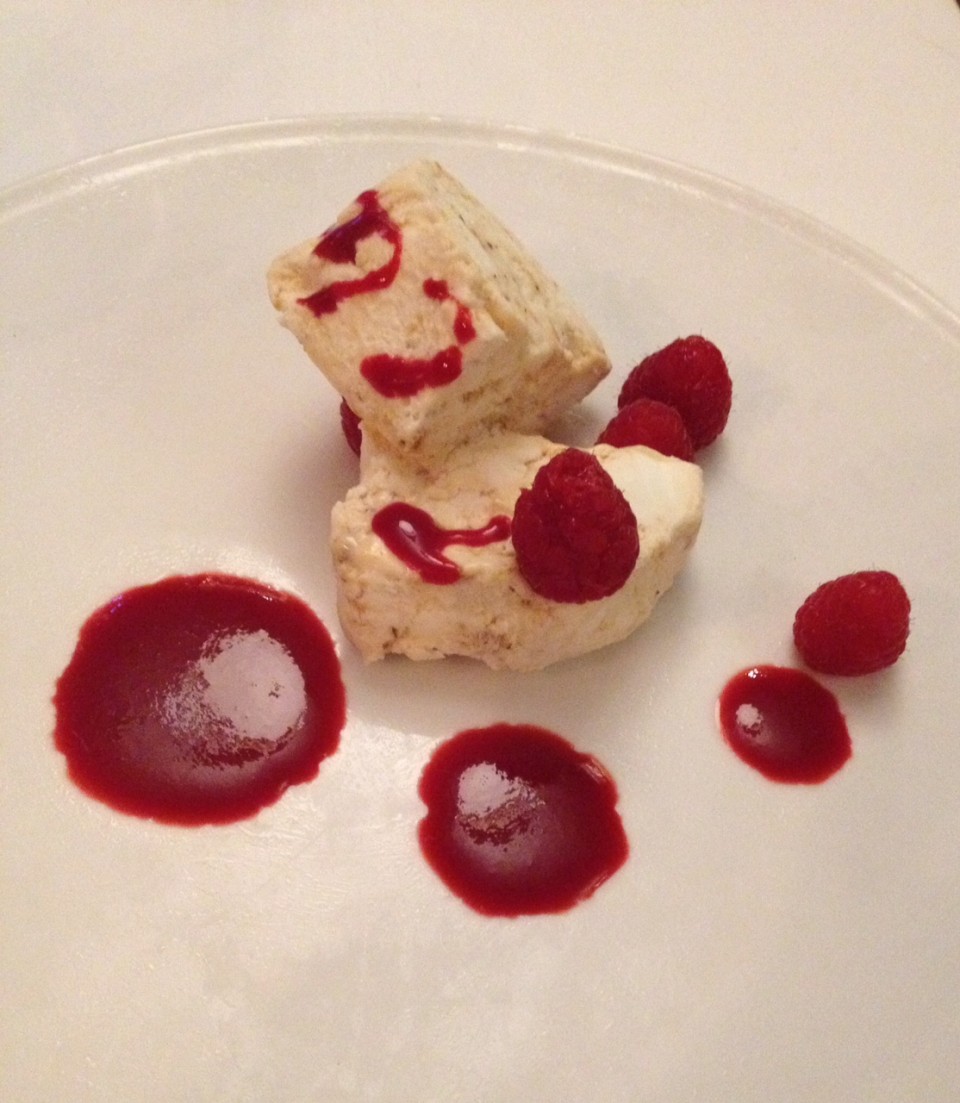 Other options included a Caramel Ice Cream with Salted Caramel Sauce, an Apple Tart and a Plate of Spring Brook Farm Reserve Cheese.

Kelly thought the WC’s wallpaper was picture worthy so here it is. Very fun!  In fact, check out the photo gallery on the Inn’s website.  The guest rooms are gorgeous. 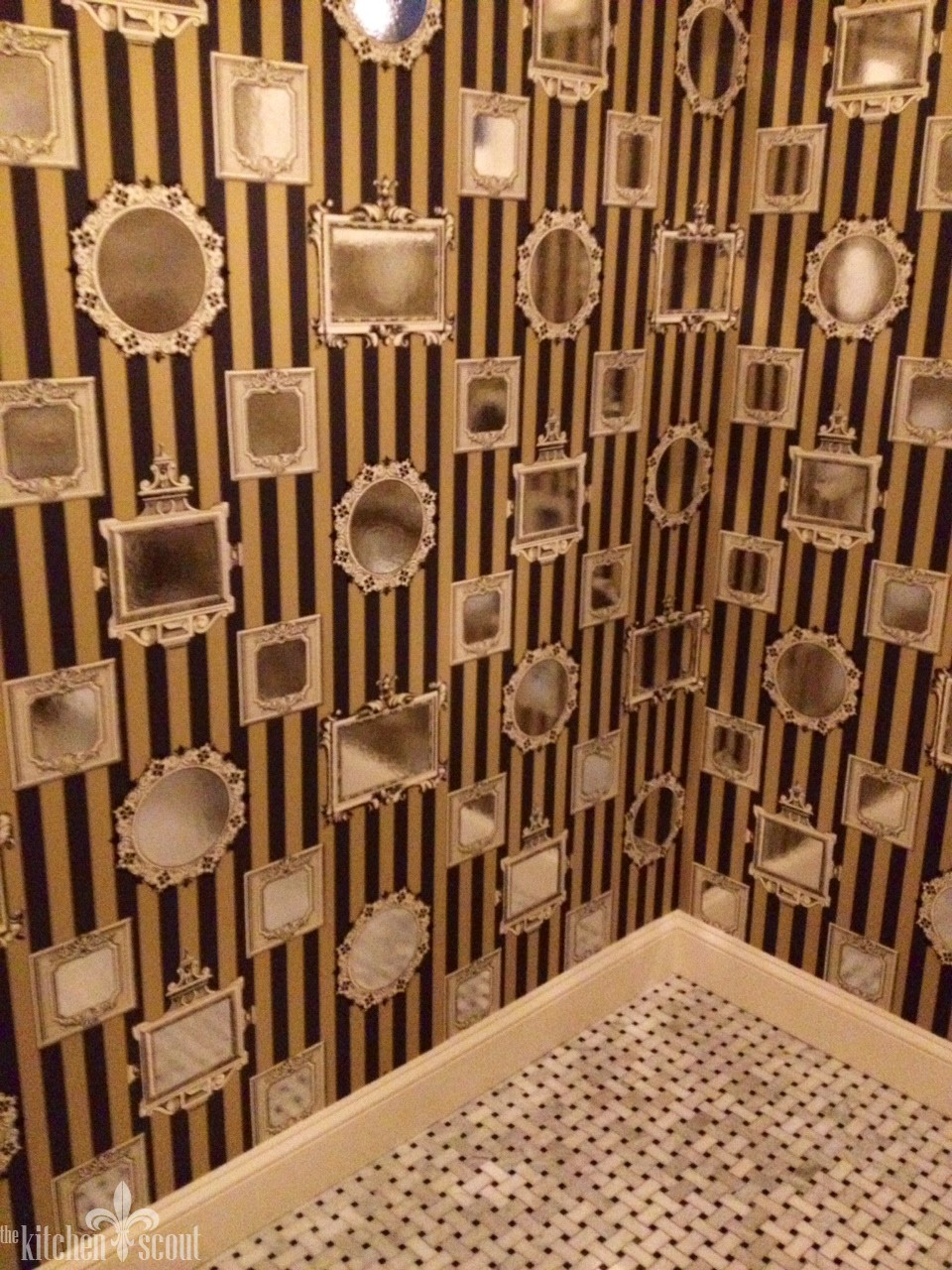 We all thought the meal was surprisingly delicious which was a huge relief to me because I chose the restaurant!  Karen remarked that “the food was delicious without being pretentious” and I agree.  Service was excellent. It’s funny because I wasn’t really planning to review Artistry as I was rushing out of the house and forgot my notebook.  But when we were seated next to a window with lighting perfect for photos, and Joan was able to dig out paper and pen from her purse for me to take notes, it had to happen.

The suburbs are eager for more sophisticated dining options and Artistry on the Green does hit this mark.  Having bar seating will help attract guests and allow the kitchen to be creative with bar menu options.  As for ambiance, this may not be the restaurant you go to for a wild night out, but if you are looking for an excellent meal thoughtfully prepared and served, this could be your place.