These luscious burgers are the second dish our Iron Chef team attempted after our Brussels Sprouts, Bacon and Gruyere Frittata.

The recipe came from the beautiful cookbook, Jerusalem written by Yotam Ottolenghi and Sami Tamimi.  The book was given to me by my dear friend, Dale and I have only made a handful of recipes from it so thought it was a good time to try another.

These burgers are moist from the zucchini and highly seasoned with fresh herbs and spices. A sour cream sauce, enhanced with the flavors of lemon, garlic and Middle East spice, Sumac serves as a bright condiment for serving alongside.  The recipe made 18 appetizer sized burgers, but you could also make four, 4-ounce burgers from the mixture to serve for lunch or dinner (just adjust the cooking time).

We thought these were delicious as well and could foresee making something similar during the competition, especially if the secret ingredient turns out to be, you guessed it, zucchini! We realized as we were making them that the recipe called for finishing off the cooking in the oven.  Since we know the competition is limited to using induction burners, we cooked the burgers low and slow in a pan on the stovetop until cooked through, an option you can do as well.

We plated the burgers for their beauty shot as a group… 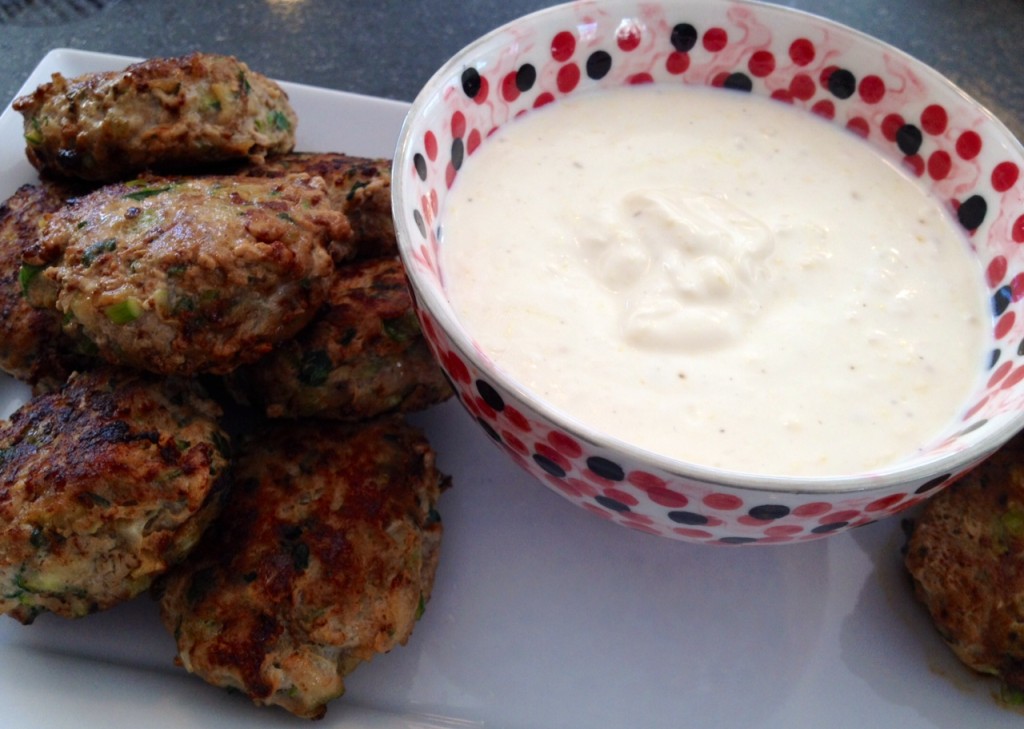 And then played around with a possible Iron Chef presentation….

I will definitely make these burgers again, most likely to bring as an appetizer to a party. Think of them as an interesting alternative to crabcakes!

Check out my tips at the end of the recipe.  Enjoy (and wish us luck!)

from Jerusalem by Yotam Ottolenghi and Sami Tamimi

Use ground turkey and not ground white meat turkey as the former contains both white and dark meats and will lend so much more flavor and moisture to the burger. Using white meat only may result in a really dry burger. I usually have sumac in my pantry, but discovered I was out at the last minute. I checked online and a substitute for sumac is lemon zest and salt, so we just added more of both ingredients to the sauce.