I’ve mentioned in previous posts that I am part of a dinner group which meets every six weeks or so.  Each of the women in the group has a passion for cooking (and eating) and we take turns hosting.  The host’s responsibilities are to pick a theme, set the table and of course, prepare one delicious dish.  This is actually a very forgiving format for entertaining, especially on a weeknight!

Past themes have ranged from Comfort Food and Pasta to Pie Crusts, Thanksgiving and Citrus.  We’ve taken the show on the road, attending cooking classes and visiting a restaurant to mix things up.  It’s a really fun way to get together with friends.

This month, it was my turn to host (I was way overdue). I kept putting off committing to a theme, although I had a rather lengthy list of ideas.  They ranged from country-focused (Greek!  Italian!  Mexican!) to the more clever and wordy (Breakfast for Dinner!  Steakhouse Favorites!  Eating Across America!  Eating Around the World!), and the serious (Food Inspired by a book or a trip).

In a weak moment, I considered a Luau.  Horrible visions of me purchasing plastic leis from Oriental Trading ensued and that idea was quickly banished.

Do you see why I need to keep a pad and pen next to my bed at night?  I have a hard time shutting off my brain.

And then, as often happens when I step away from the crime scene and breathe, the ideas start coming. That’s how “Ode to Hamersley’s Bistro” popped into my head as our dinner theme. The group really loved it!

Hamersley’s Bistro  is an iconic restaurant in Boston’s South End which is owned by famed chef, Gordon Hamersley and his wife, Fiona Hamersley. Hamersley’s has served classic bistro fare to Bostonians for 27 years and is sadly closing its doors at the end of October. The Boston Globe’s Devra First wrote a wonderful article about the closing that has great information about the Hamersleys and their influential role in Boston’s culinary scene here. Corby Kummer who reviews restaurants for Boston Magazine also wrote a fond farewell here. They are both good reads.

I first went to Hamersley’s, in its original location, as a young working girl with my parents and ordered the Roast Chicken, a dish which has been on the menu from the start and will be served right up until closing day. My husband and I had the good fortune to get to Hamersley’s one last time before the theater a few weeks ago so I ordered the chicken and here is what it looks like, albeit a little blurry… 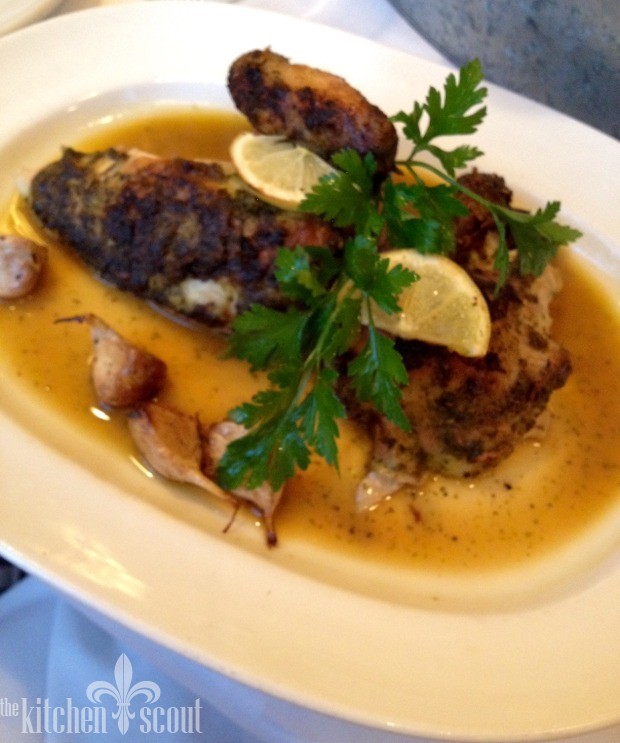 A small chicken is coated with a marinade consisting of parsley, garlic, shallot, Herbes de Provence, rosemary, Dijon mustard and olive oil.  The chicken is roasted, taken mostly off the bone in four serving pieces and broiled to crisp up the skin. It is served with a pan sauce made with stock, lemon and a little butter.  The dish also includes roasted garlic cloves, a sliver of roasted onion and one perfect wedge of roasted potato.  It’s pretty much perfection on a plate and the only restaurant where I will order chicken out!  PS – I read somewhere online that Jody Adams (Rialto, Trade) actually developed this recipe with Gordon when she was his sous-chef in the earliest days of Hamersley’s.  How’s that for trivia?!

Back to dinner group. I asked everyone to bring dishes inspired by the restaurant’s menu, or from Gordon Hamersley’s cookbook, Bistro Cooking at Home.

First up, appetizers Gordon Hamersley-style.  He mentions in the book that when he and his wife, Fiona entertain, they do not make a formal sit-down appetizer, but rather set out plates of pate with toasts, mustard and cornichons.  Gordon finishes making the meal while Fiona pours wine, her area of expertise.  This is the spread Anne brought to share based on that philosophy. 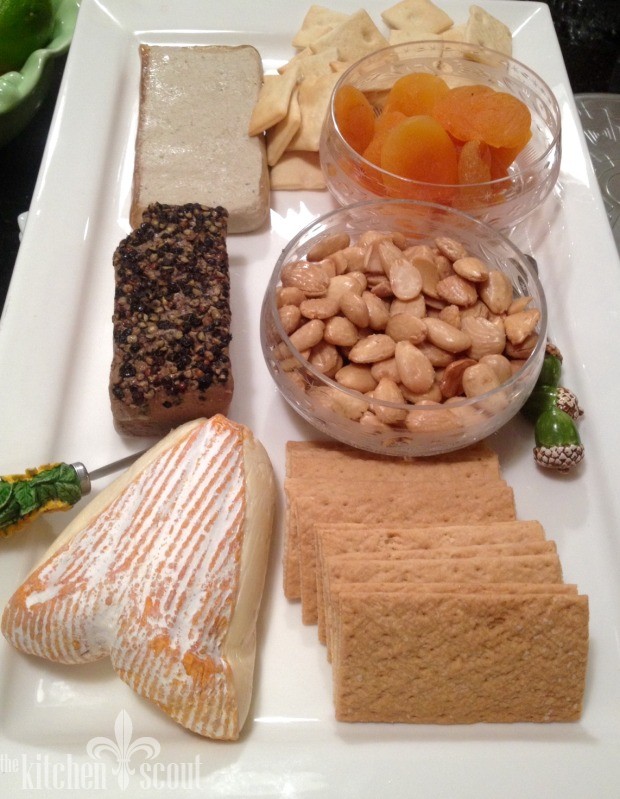 Two pates, Saint Albray cheese, Marcona almonds and dried apricots. The cornichons were on the side!

To start the meal, Pam made Gordon’s Arugula Salad with Fresh Figs, Gorgonzola and Bacon.  Dressed with a balsamic vinaigrette, the salad was fabulous and we loved all the elements.  Pam brought these whimsical dishes she had collected over a number of years traveling to Paris to plate the salad.  They came in lots of fun colors and had little French expressions on them. 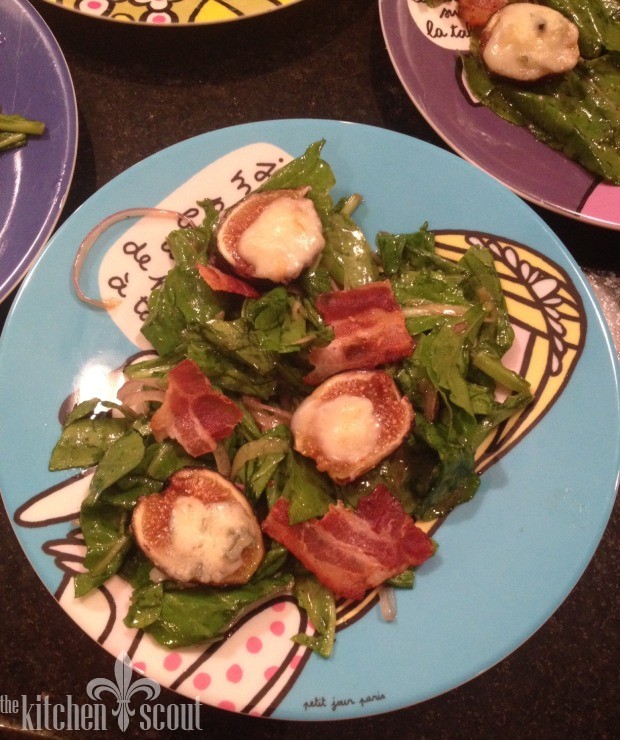 Our main course included Gordon’s Salt Cod with Spicy Tomatoes, Garlic and Onions.  Marty made her own Salt Cod, also one of Gordon’s recipe to use in the dish which she said was surprisingly easy to do. This was a complete meal in itself, filled with russet potatoes and a little bit of chopped bacon.  Really light and delicious…

Next up, was my contribution of Hamersely’s Roast Chicken with Garlic, Lemon and Parsley. There was a recipe for it in Gordon’s book so of course I had to give it a go! 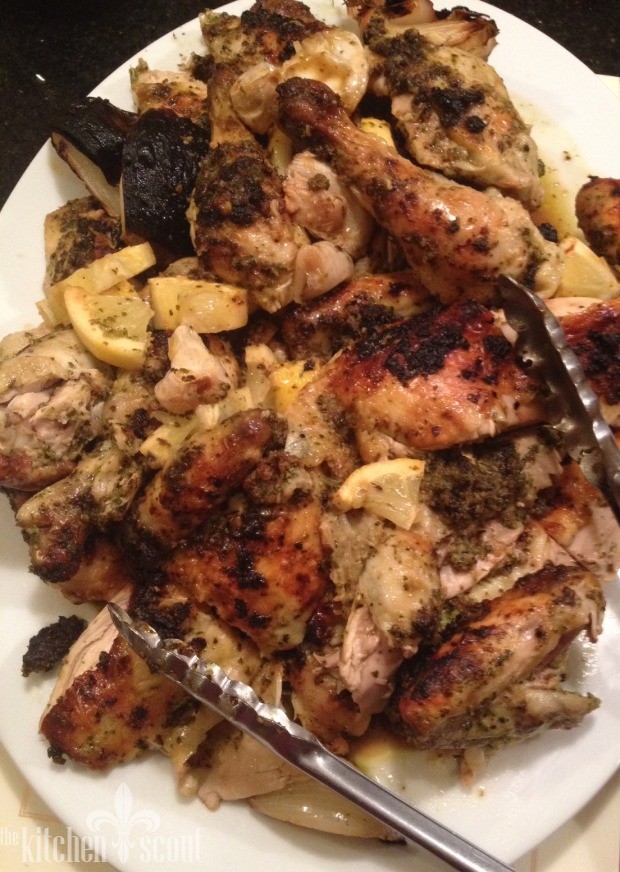 We all thought it was pretty delicious.

For side dishes, Betsy brought an Autumn Vegetable Stew with Cheddar-Garlic Crumble Crust.  Studded with red onion, carrots, celery root, squash and parsnips, this dish was a winner and would make a wonderful vegetarian dish for your Thanksgiving table. Here is a similar version I found on Food & Wine, contributed by Mr. Hamersley himself. 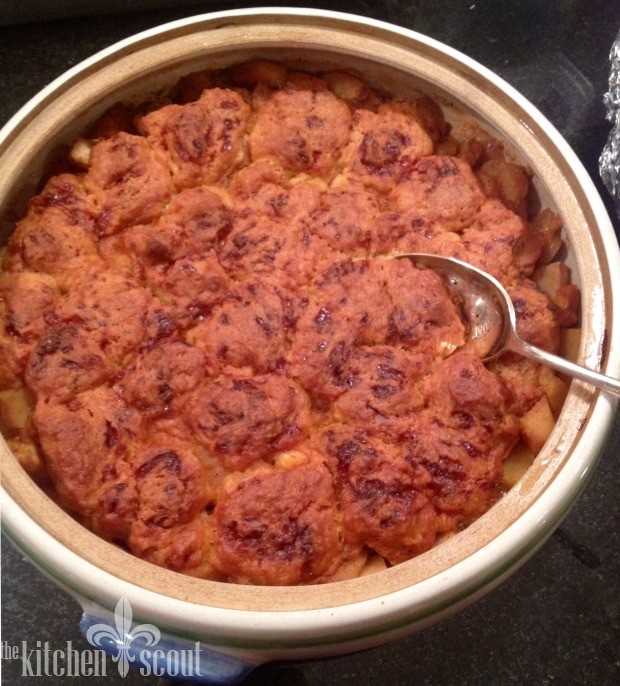 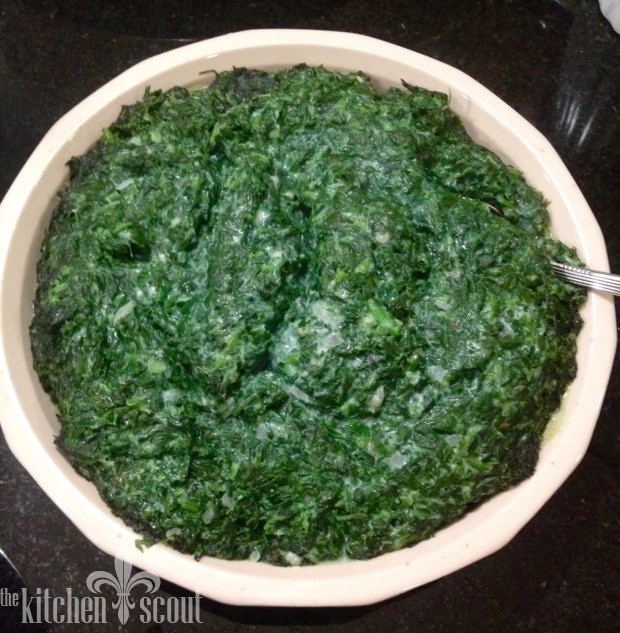 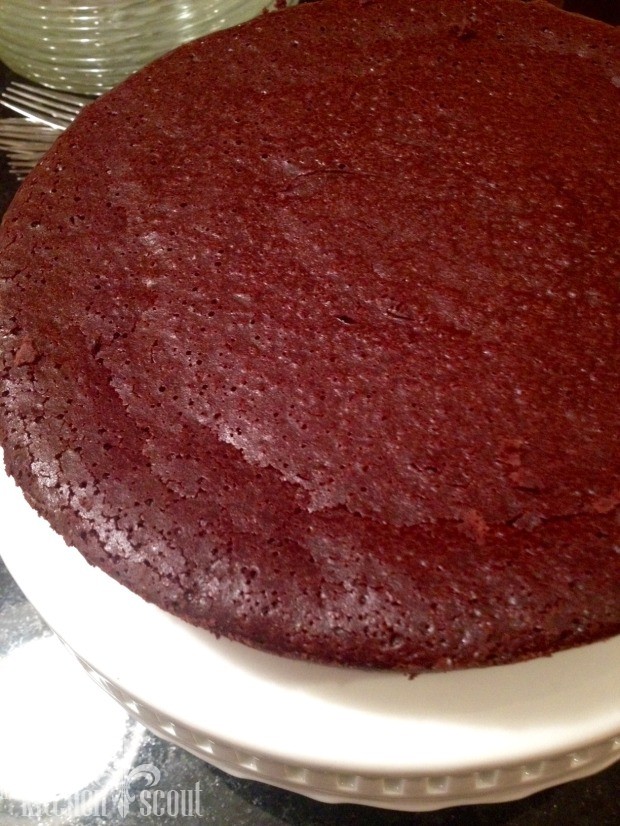 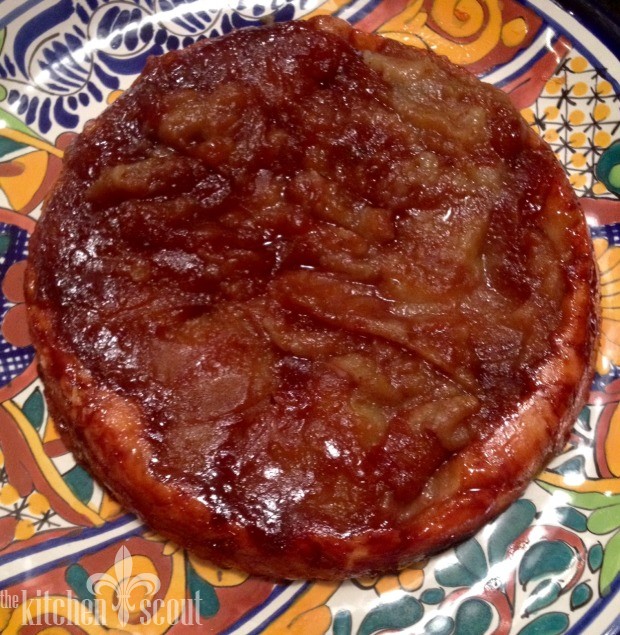 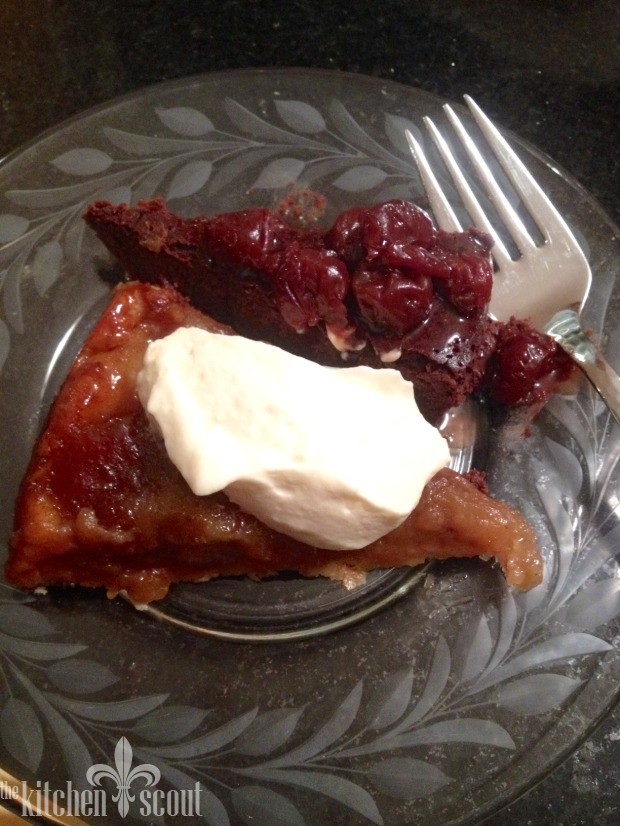 They were both delicious, but as much as I adore chocolate, I really enjoyed the Tarte Tatin – such a great Fall dish.

How did we do?  I hope we did Gordon proud!

Here is a link to Gordon’s recipe for his unbelievable Roast Chicken.

But, because I love ya and am a practical gal, I’ve taken the liberty to rewrite the recipe to make it a touch simpler for the home cook.  I feel like I’m commiting culinary treason here, so let’s just keep it between us, shall we?

My adjustments have you simply cooking one chicken at a higher temperature to get the skin as crispy as possible.  This allows you to carve the chicken as you would any other, avoiding taking the breast and thigh off the bone as they do at the restaurant and then recrisping it under the broiler.  I’ve also added some lemon slices to the cavity of the bird to heighten the citrus flavor.  Finally, I simplified the steps involved with making the pan sauce.  As a result, the most time consuming part of the recipe should be making the marinade!

Here is my finished product although I forgot the lemon slices for garnish! 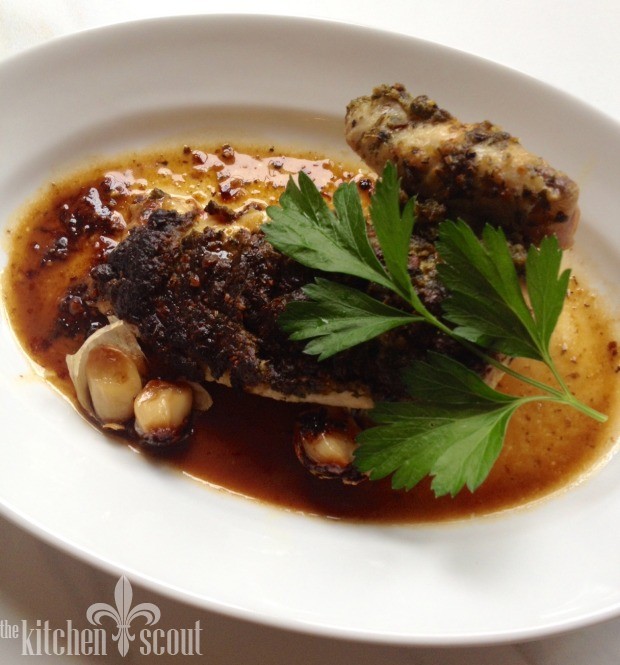 Enjoy!  Thank you and best wishes to the Hamersleys! 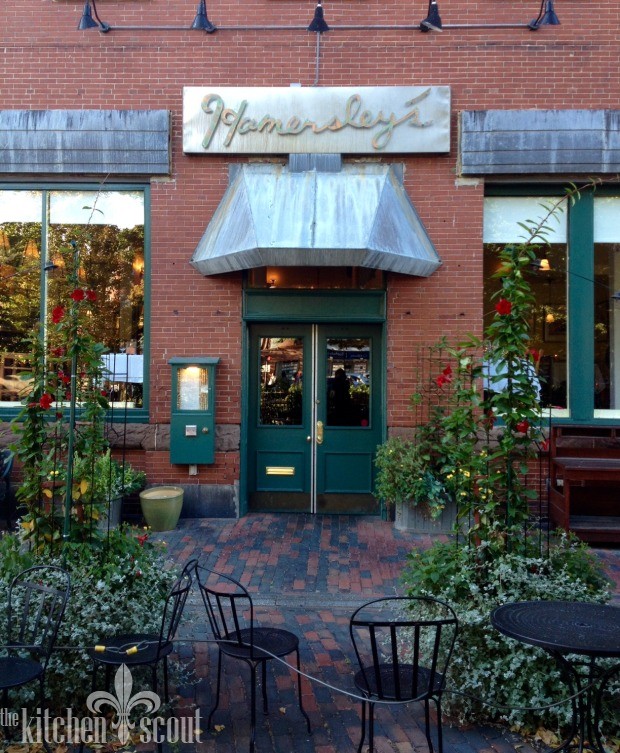 Adapted ever so slightly from Gordon Hamersley's original...

A note about chicken. This dish should serve 3 reasonably average appetities, possibly 4. If you have large appetites, you may want to double the recipe and worst case, you have a little leftover chicken to put in other dishes during the week.

I prefer cooking smaller chickens in general. I find the dark meat to be so tender and less gamey than with a larger bird so for my family, there is less waste.

One final note - I may try this again using a butterflied chicken (backbone removed and flattened) to maximize the skin's exposure to the oven's heat and the broiler. If you try that, just adjust the cooking time accordingly.

For the roasted garlic, cut the tops off a whole head of garlic and place it on a sheet of foil. Drizzle with olive oil and sprinkle with kosher salt and pepper. Wrap the foil around the garlic to enclose and place in a 350 degree oven for 45 minutes to one hour until golden and easily pierced with a knife.