Father’s Day is this Sunday so I thought this post should relate to the holiday in some way. True to my Pisces nature, I started “swimming” in more than one direction when debating the post’s content.  The draft folder of my WordPress now looks like a disaster as it has roughly 5 variations on the Father’s Day theme.  The titles of these drafts range from the practical “Father’s Day Post”, to the clever “Owed to Daddy”, and my desperate and abbrieviated “Final FD Post”.  There are still others in between.  I was conflicted.

One draft involved one of my favorite recipes for Grilled Leg of Lamb, a dish you could serve at your Father’s Day celebration.

Another draft was dedicated to my many friends who lost their fathers this past year and for whom this Father’s Day will be a particularly bittersweet day.  I wanted to let them know I was thinking about them and wish them peace.

And yet another was a restaurant review with the idea that I would never decide which draft would be the survivor!

I started The Kitchen Scout for many reasons.  First and foremost, I want to share what I am doing in and out of the kitchen with my family, friends and hopefully lots of new people along the way.  But I also love to write and tell stories, not only about the present but also to remember the past.  The stories usually serve as the backdrop for a recipe, but they are an equally important component of The Kitchen Scout posts for me. Both the cooking and the writing are allowing me to connect with my readers.

When I stepped away from the computer and allowed my thoughts to simmer, it became clear that I should “trash” all the drafts and just write this post for Father’s Day.  It’s about my beloved father, the joy of grilling and his recipe for Shrimp with Lemon and Garlic.

My father loved to grill. And I loved my father unconditionally.  I always wanted to be with him, whether or not I was getting smoke in my eyes. 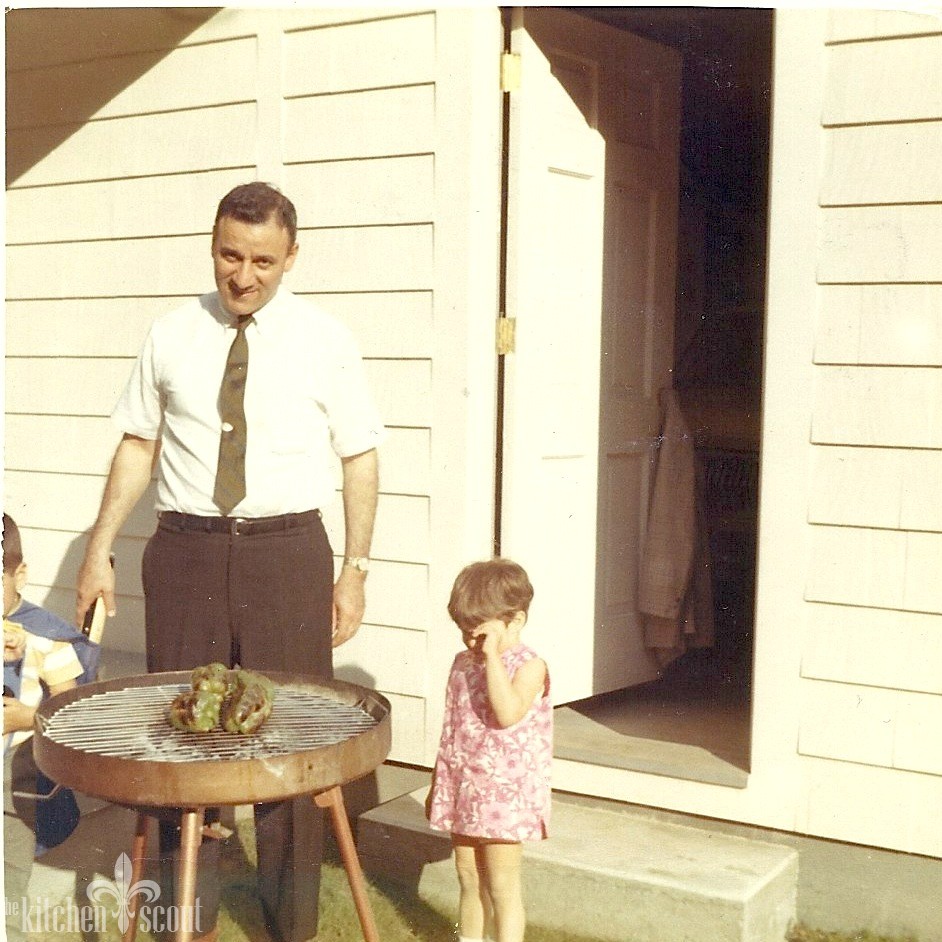 Isn’t my little dress so cute?  My Mom had a matching version.  And I love that my Dad is grilling in his tie. 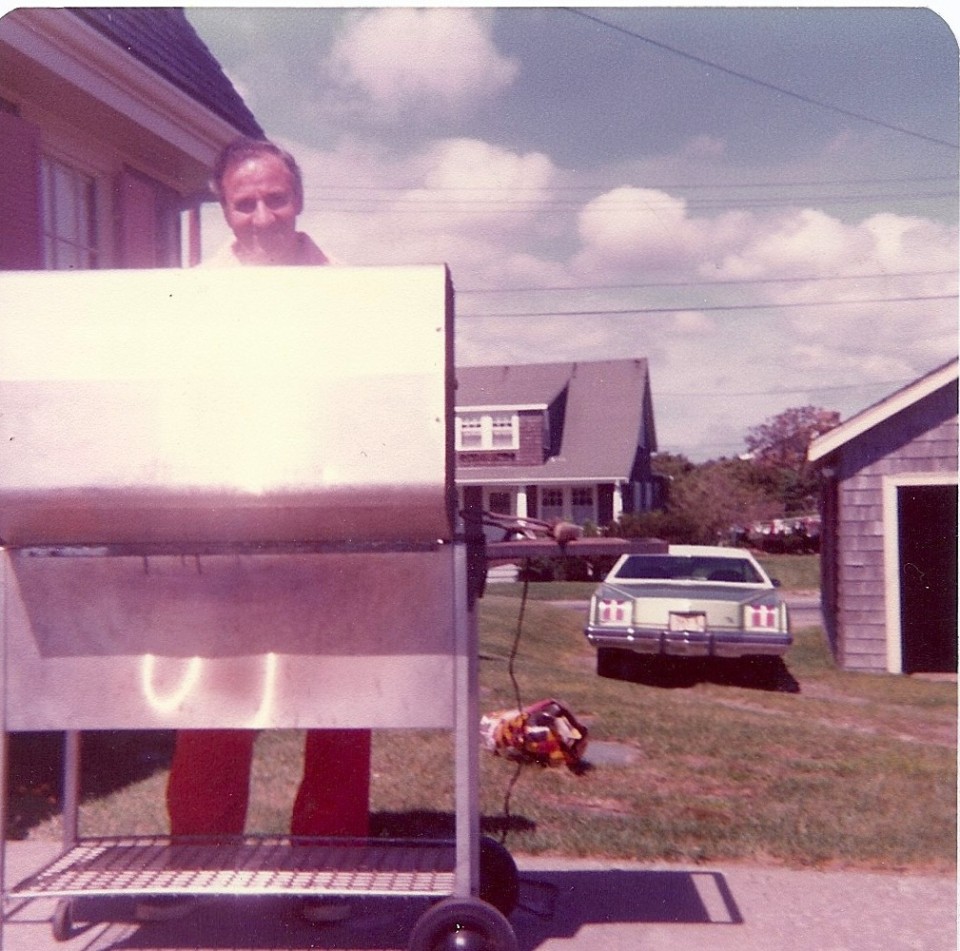 My father not only grilled at home, but also at my Grandmother’s (his mother’s) summer house where we used to spend the month of July.  Chances are there were enough steaks and lamb chops on that grill to feed a small army.  Summer weekends meant big dinners with my Grandmother and whoever else happened to be visiting.  There was always plenty of food, my family’s expression of love, and an extra seat at the table.

While my father was the family grill master, he wasn’t a cook per se.  However, he did have one recipe that was his specialty.  Given to him by a friend, the recipe was for Jumbo Shrimp, although it had no official title and was just a paragraph of instructions. My father made the shrimp in a cast iron pan on the grill.

I couldn’t believe it when I found this picture of him making the shrimp.  I guess it’s a good idea to take a lot of pictures of someone you love doing something they love, right? 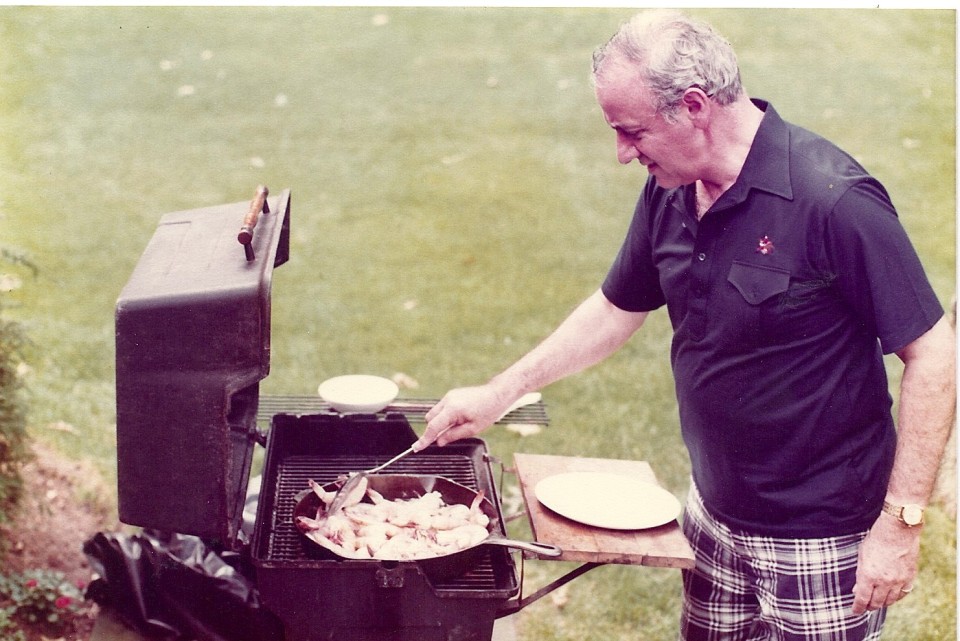 My father would make the shrimp a few times each summer, usually on a weekend.  They were messy to eat, but really delicious. Cooked slowly in the shell with a generous amount of olive oil, garlic, lemon juice, vermouth, salt and pepper, the shrimp emerged from the pan glistening and infused with so much flavor. The shrimp were a meal all on their own, but my mother made a tossed salad every night so that was usually served alongside. With Ken’s Steakhouse Italian dressing, of course.

My father and I loved this dish a little more than my Mom and brother so we would linger at the table polishing off the shrimp. It was a “let’s sit at the table and chat for awhile” type of meal, although my father and I were never at a loss for conversation.

My father’s last grill was a fire engine red Ducane.  His favorite holiday was Thanksgiving and this picture was taken one year when he made a turkey on the rotisserie.

And when he passed away nearly 16 years ago, my Mom gave us his grill. 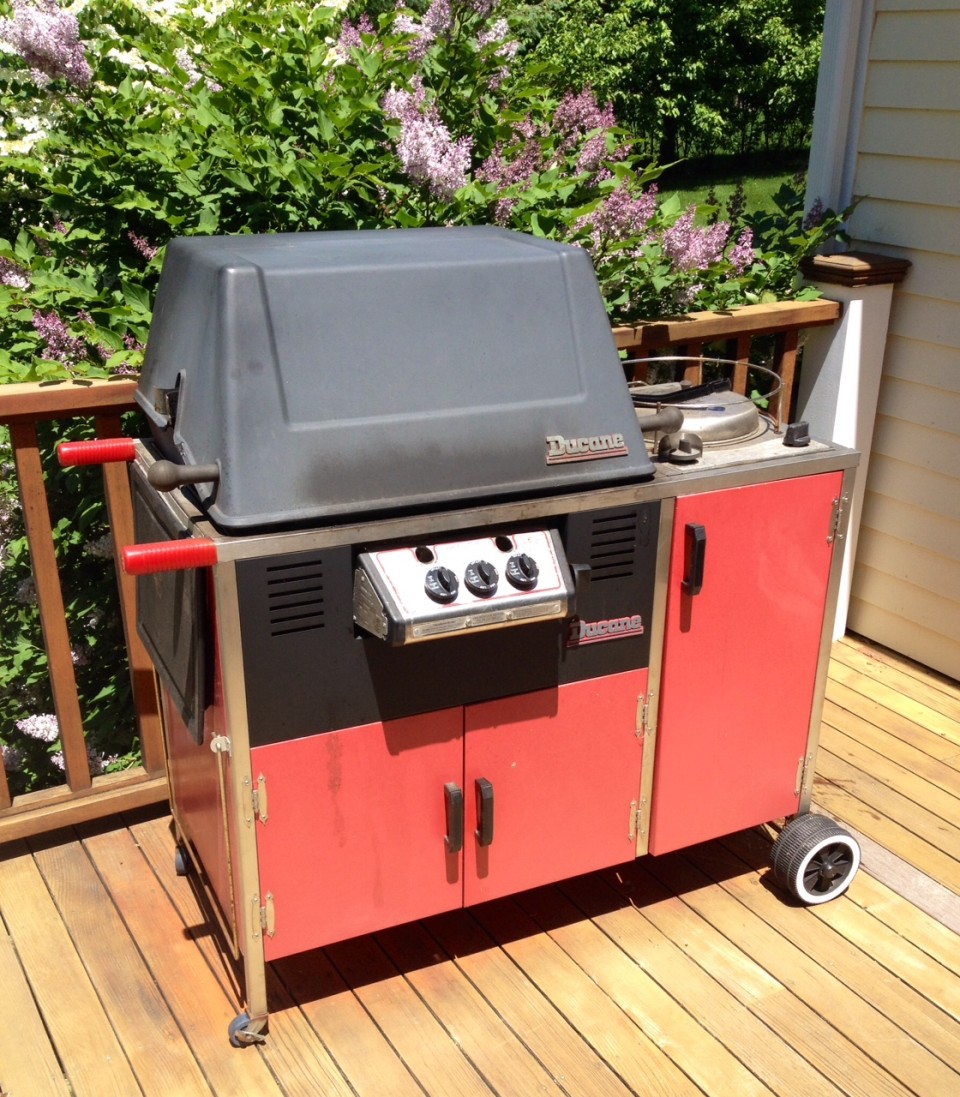 which is now a little tempermental so I ask my husband to light it.

She also gave me my father’s cast iron pan. 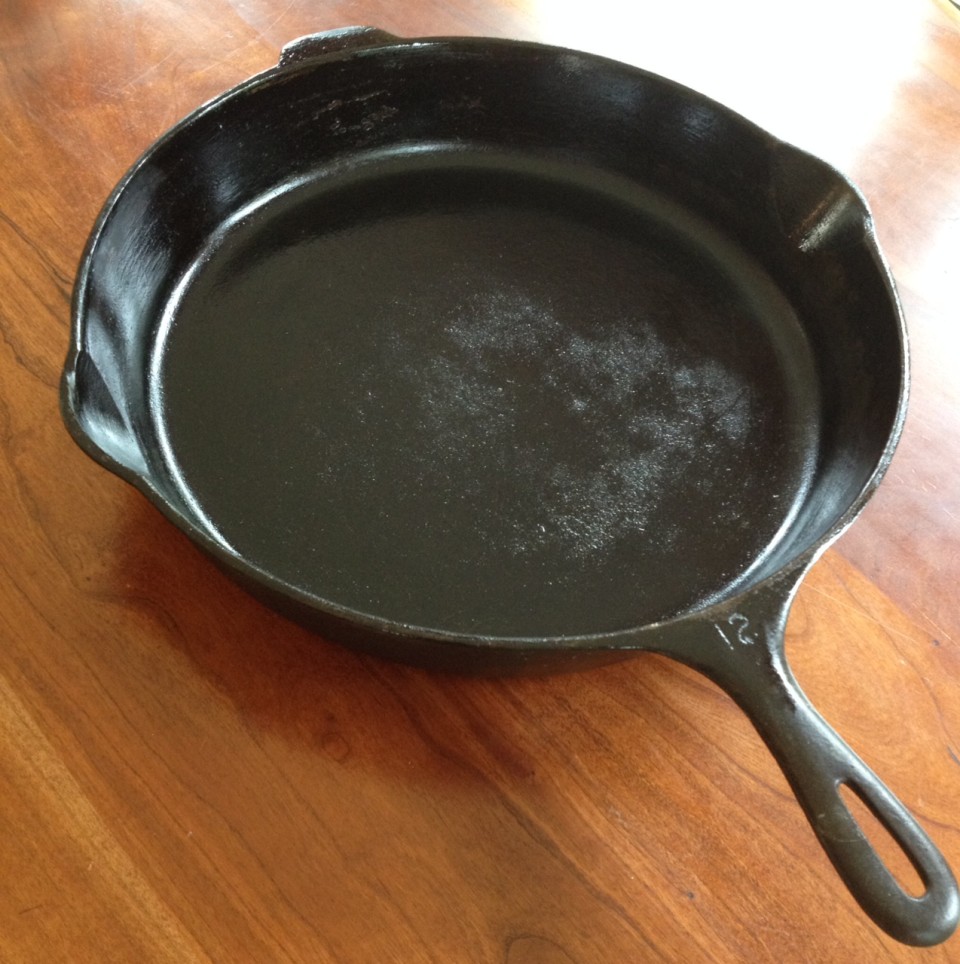 So I can make his delicious shrimp from time to time. 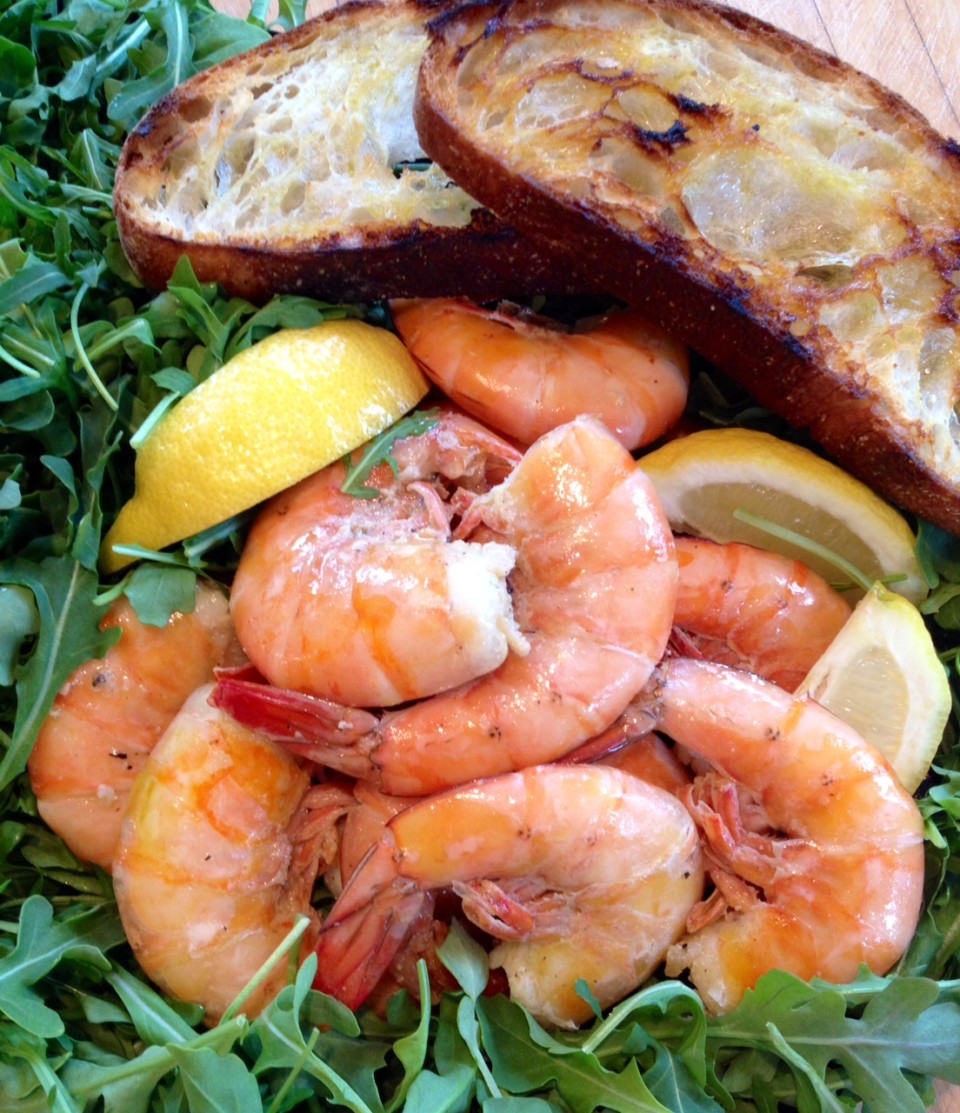 Kitchen Scout Tips: The wording for this recipe is exactly as it was written down, including the wish for Good Luck! This recipe clearly makes an enormous number of shrimp and my recommendation is to cut the recipe in half and use a large cast iron pan which should comfortably fit 2 1/2 pounds. Also, it is important to start the pan with cold oil and garlic and to bring it very slowly to "the boil" so that the garlic infuses the oil and doesn't burn which will destroy the flavor. Once you add the shrimp, turn the heat down and cook the shrimp slowly. Finally, you can remove the shrimp once they are cooked through, allow the liquid to reduce until a gravy texture is achieved and pour it over the shrimp to serve. It's a very forgiving recipe if you want to make an even smaller quantity. The key ingredient is the vermouth. It adds something special. Crusty bread is a must for dipping in any leftover gravy.

3
Farmstead Table
Artistry on the Green