I wasn’t going to blog this week.

Today marks about day 10 of my feeling under the weather.  What started as a cold developed into an upper respiratory infection and while I am definitely on the mend, I’ve spent the better part of the last week “laying low”.  Yesterday marked the first time I’ve left the house in five days. Yikes.

Fortunately, my pantry was pretty well stocked so I’ve been able to take care of myself in kitchen. However, this bug has claimed my sense of smell, robbing me almost completely of my ability to taste!  That combined with a general lack of appetite has led to a rather dreary culinary week I am afraid.

There was a small glimmer of hope last night when I made a “clean the fridge” salad for my dinner and was able to detect the acidity in its vinaigrette.  And then today, I reheated a soup I made earlier in the week and was giddy detecting some flavor once again so I decided to whip up a post since it’s as dreary outside as it feels inside.

Earlier in the week, I had a huge craving for the Hot and Sour Dumpling Soup I order at Gene’s Flatbread Cafe in Westford (locations in Boston and Woburn as well).  A generous portion of tender pork dumplings float in the hot and sour broth of my dreams.  In fact, it was really just the broth I was craving as I figured it would be somewhat nourishing from the garlic, ginger and vinegar that contributed to its delicious flavor. Here is a picture of the soup that I snapped on my first outing to Gene’s with my paddle group… 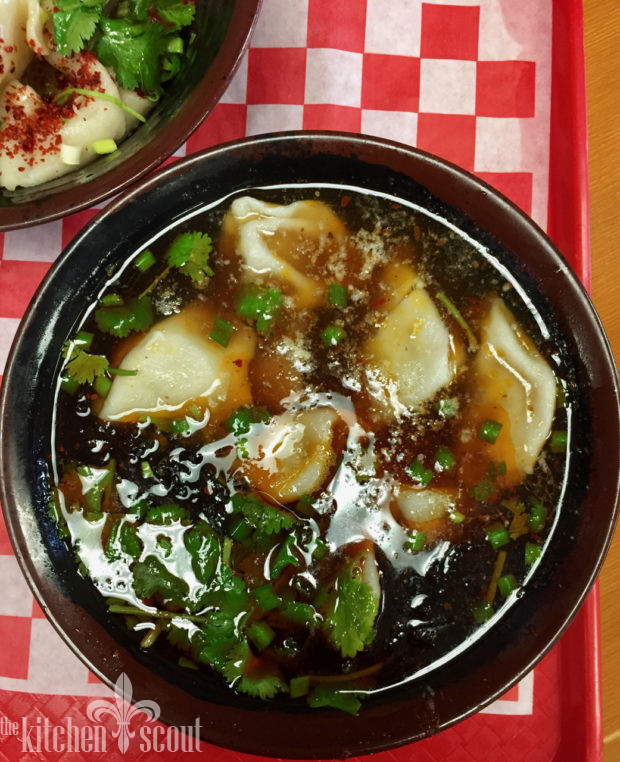 Lacking the motivation to put on clothes to seek my bowl of nirvana, I decided to consult my cookbooks and pantry to see if I could come up with something similar, minus the homemade dumplings of course.

The result is this Hot and Sour Mushroom Soup that I am sharing with you.  It is essentially a pared down version of a recipe from the Myers & Chang at Home cookbook that you may recall from this In Conversation with Joanne Chang or this Review of Myers & Chang, a Boston favorite.  In the cookbook, the recipe is called Esti’s Hot and Sour Soup and was one I tested for Joanne when she was writing the book.  That recipe has ground pork and tofu, yielding a reasonably hearty dish.

I was going for a clear, nourishing broth like the one at Gene’s so I increased the garlic and ginger while skipping the ground pork and the tofu.  I also didn’t have any!  I swapped out the dried mushrooms called for in the recipe with Whole Foods brand mixed frozen mushrooms that I always keep in my freezer.  They are a life saver and so versatile, containing white, shitake, crimini and portobello mushrooms.  Hot and Sour Soups usually have a thickener such as corn starch or in this case, egg but I eliminated that too.

So while my soup bares little resemblance to the original dish, or a traditional Hot and Sour Soup for the purists I suppose, I can attest that it is restorative.  Since I have heard of so many people who haven’t been feeling their best selves of late, I thought I would share it today in case someone you know, yourself included, might need a little bowl of nourishment.

You could even consider dropping some tofu or meat filled ravioli or other type of dumpling in this soup to make it more nutritious and hearty.  I will be making it on repeat until I am back to 100%!

Here’s a picture of what the soup looks like with the pork and the tofu since I didn’t snap a picture this week!

Adapted from Myers & Chang at Home. I kept this soup light and brothy. If you want to make the liquid a little thicker, whisk together 2 room temperature eggs and then whisk them slowly into the simmering broth at the end of the recipe. You can also amp up the nutrition by adding in some diced tofu. If you are a vegetarian, you can use vegetable broth.

I like Whole Foods 365 brand frozen mixed mushrooms that have white, crimini, shitake and portobello. I think Trader Joe's also has frozen mushrooms.