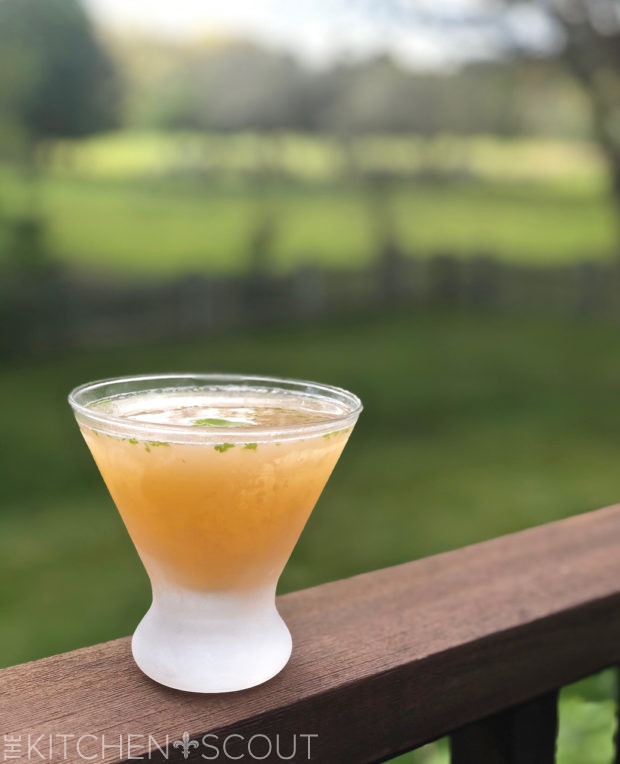 Today is our 27th wedding anniversary!  Nothing brings you closer than 27 years, unless it’s 70 consecutive days in quarantine, would you agree?

My bridesmaids assembled at my childhood home, dressed in matching purple (my favorite color) dresses and faux pearl drop earrings that I most likely picked out at Filene’s during a lunch break (can’t recall).  My mother’s parents were alive and they were also in attendance.  In fact, my mom was my current age exactly when we were married which is such a strange feeling.  Pictures in various formations ensued, including the traditional glancing in the mirror alongside your maid of honor.

We were married in my Armenian church, the ceremony conducted in just enough English (meaning barely any) to allow my husband the knowledge that he did commit himself to me until death do us part.  We wore crowns as part of the ceremony as is the custom, signifying that we were king and queen of our kingdom going forward.  A fantastic celebration ensued and it was only after the reception that my mother told me the lead singer of our band had fallen ill and wasn’t in attendance.  I barely noticed as the day flew by in the blink of an eye.

We have some wonderful stories from that day, some of which we learned by watching our wedding video and seeing some of the shenanigans our friends were up to during the reception!  We will likely watch it tonight to relive the day and hear the toasts that were captured, many from those we loved who are no longer with us.  Hearing their voices is soothing and sad at the same time.

The videographer ends the video with my mother and two of her best friends saying good night to us through the camera lense, while one of their sons insists it’s time to leave the party!  It’s funny and slightly ominous at the same time and I love that he chose that for the last scene.

For dinner tonight, we’ll probably throw something on the grill that we’ll enjoy alongside some salads.  Simple food which is the way we actually prefer to eat, especially these days when it sometimes feels as though we just move from meal to meal.  We will hopefully sit outside and take in the view and be grateful for the years under our belt, looking forward to many more non-quarantined ones together!

But in the meanwhile, I’m going to share some recipes that I think might be worth your considering for your upcoming weeks.  Two in particular were big hits with my family, photos notwithstanding.  Sorry for that – I am cooking in real time and can’t always get a good shot in early evening light.  I will also share a few other tidbits so let’s get going…

First, if you’ve never tried fiddleheads, this is the moment to snag them before they are gone from the markets.  They have a brief season and my husband and older daughter love them so much that I try to make them as much as possible to feed their passion.  We actually saw a ton of them on a walk in the woods near our house last week, but were not equipped to forage!  I wash them three times in cold water, blanch them briefly and then saute them in a little olive oil and season with salt and pepper, perhaps some lemon juice.  They are earthy and have a great texture.  Here’s what they look like in the wild… 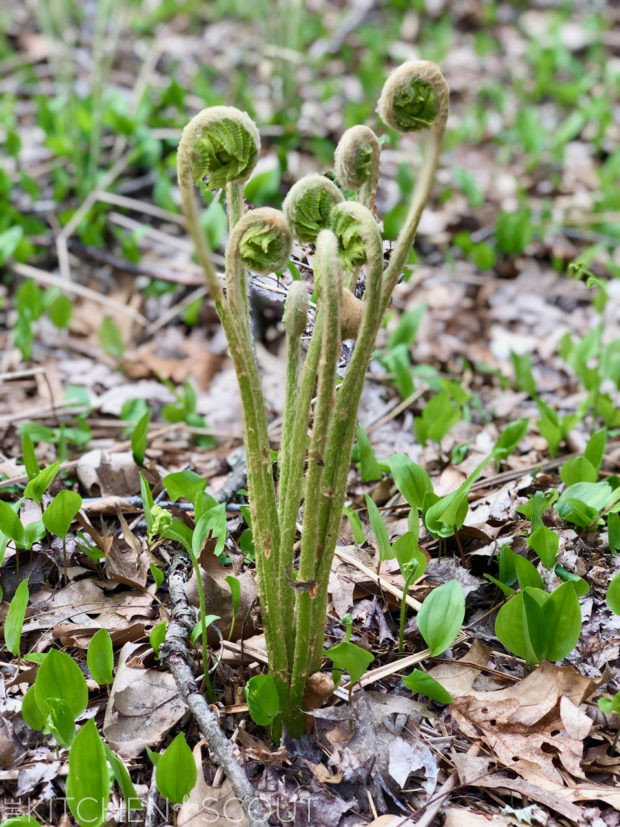 I shared these next photos on Instagram, but some of you probably didn’t see them.  Since so many of us have a love affair with lilacs, I thought you would enjoy these beauties that are in the Arnold Arboretum.  We escaped from our house and visited there last Friday for a little walk around… 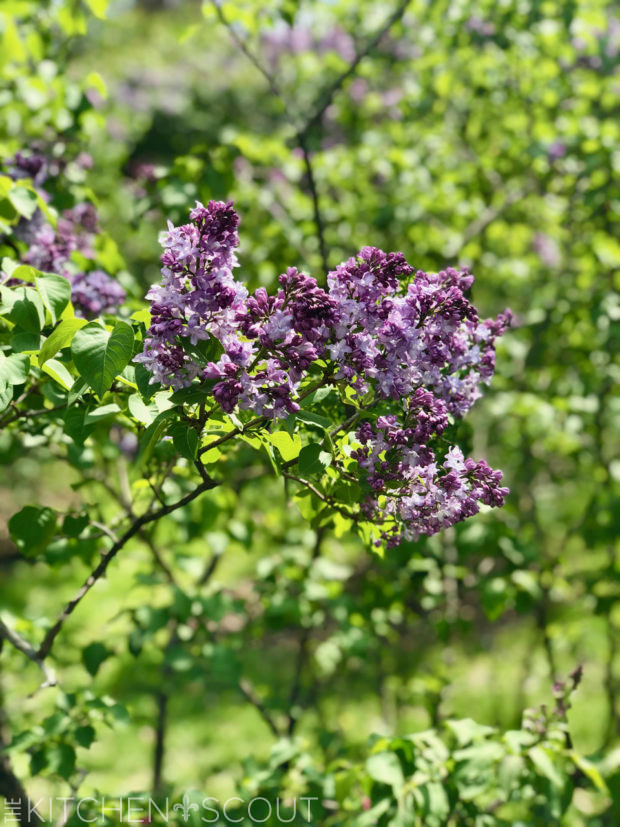 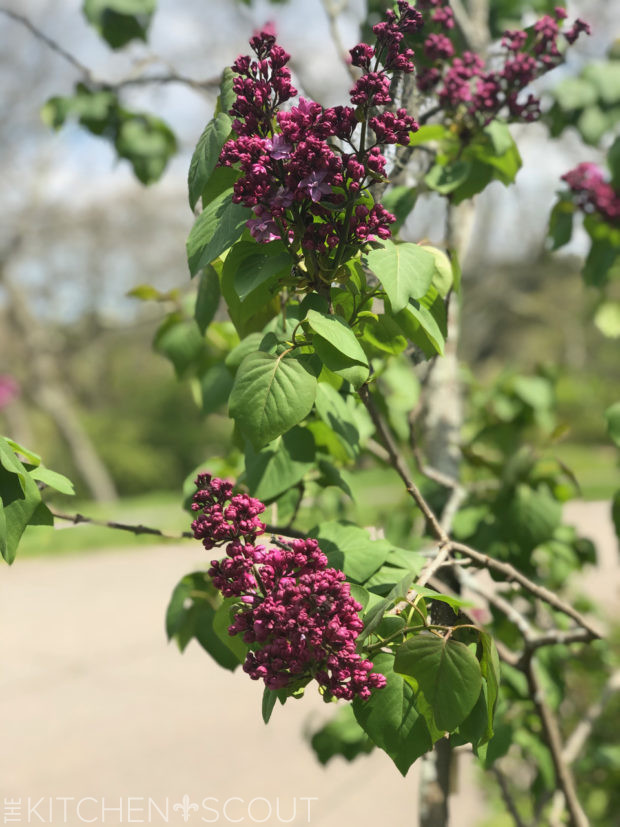 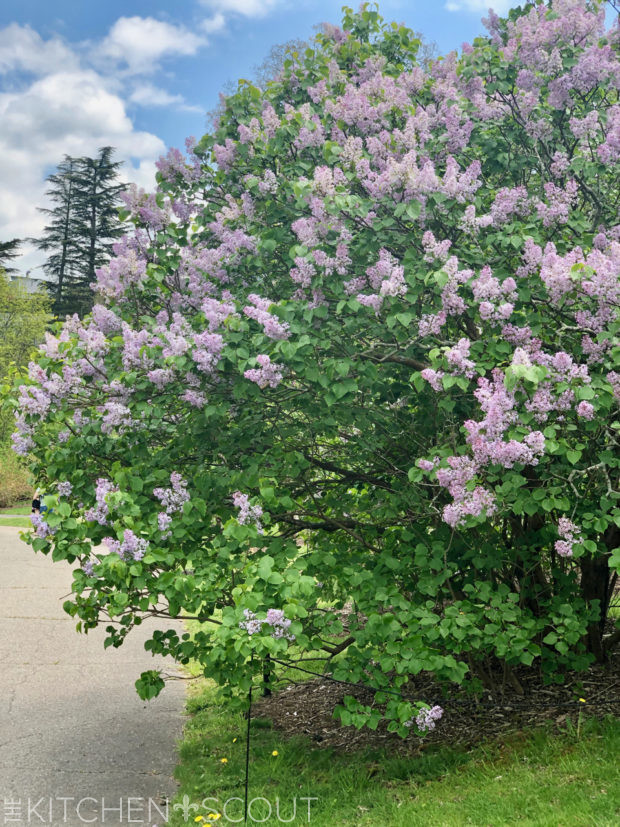 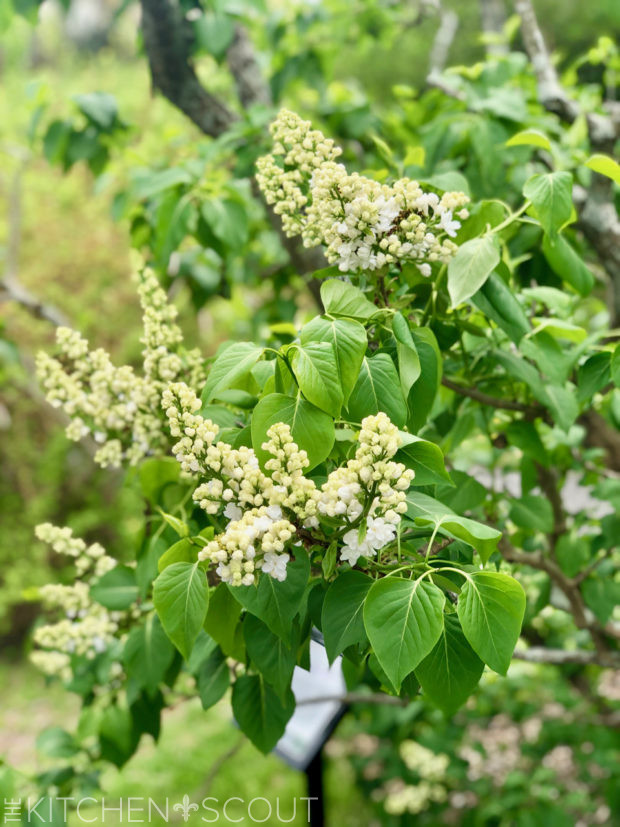 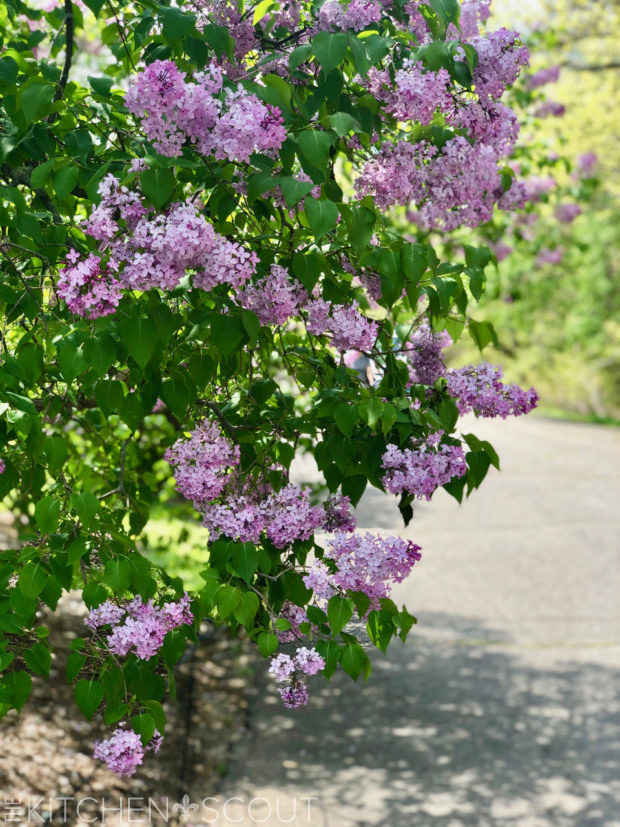 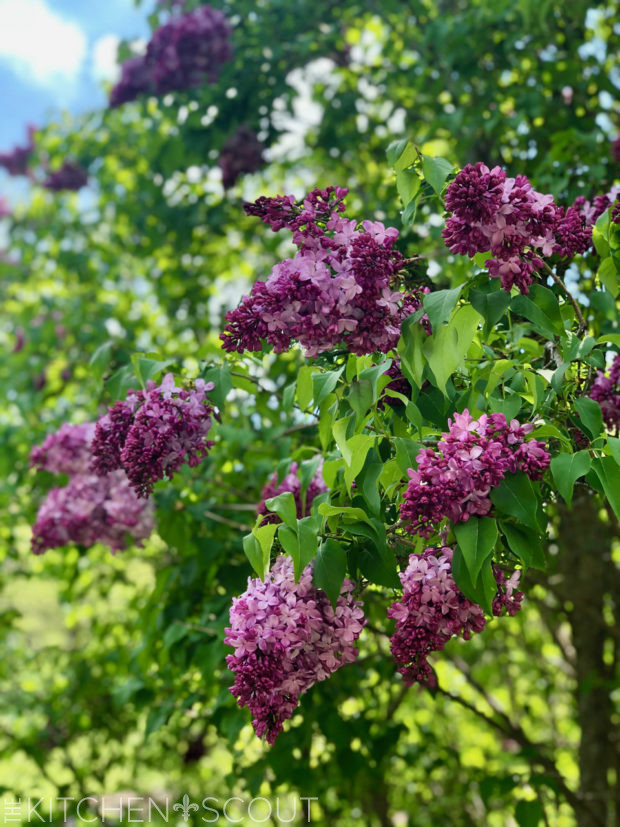 Ok, that’s it for the nature photos.  Now on to food blog related content!

I’m sure like me, you have refamiliarized yourself with some things in your pantry that you had long forgotten about or not yet found the opportunity to use.  I have had a few vinegars from a field trip my husband and I took to Sid Wainer in New Bedford a few summers ago.  You know, the type of thing you buy in the moment with all sorts of thoughts swirling for its use, only to forget it about until you are quarantined and need to create room in your pantry for 32 cans of dry goods.  This particular vinegar that is made with tomatoes and peppers is so fun and flavorful and I am loving it on salads, but it can be used as a replacement for Tobasco on eggs or in so many other ways.  Look for it where you see Jansal Valley products sold, specialty food markets and lots of farm stands.  I also have the Mango Pulp Vinegar to try as well.

Before quarantine, I borrowed the beautiful cookbook, Zaitoun from the library.  Written by Yasmin Khan, the book’s recipes reflect the cuisine of Palestine kitchens.  This is the only recipe I’ve made thus far, but it was for a lovely and warming roasted cauliflower soup that hit the spot since the weather has been reluctant until recently to warm up!  To create it at home, roast 1 large cauliflower and 2 sliced onions that have been tossed with some olive oil and 1 1/2 teaspoons each of cumin and coriander at 400 degrees until tender.  Sautés 4 crushed garlic cloves in 2 Tablespoons of salted butter just to release their flavor and add 1 quart of low sodium stock, one diced potato and 1 teaspoon of turmeric to the pan, bring to the boil and simmer until potato is softened.  Add the cauliflower and simmer for 5 minutes before pureeing.  The soup is thick so you may want to thin it with more broth for your desired consistency.  Almost had the texture of a porridge but I loved it that way.  It’s suggested you top it with some toasted almonds and chopped parsley which is nice for a little crunch and some fresh flavor… 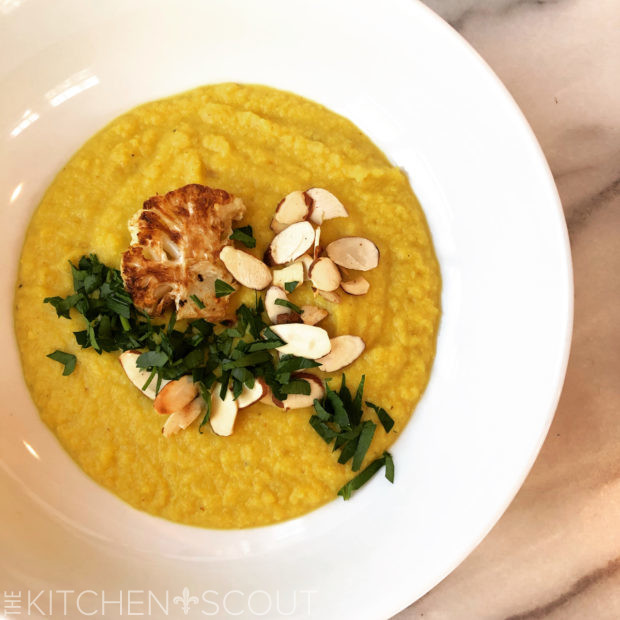 This is the worst picture of the tastiest 15 minute meal I made from the archives of Smitten Kitchen.  Skillet Ravioli with Spinach is what you need when you just can’t deal with cooking one more meal!  It takes no time and barely and thought.  As long as you use great quality ravioli (mine was from a local company that I purchased at Whole Foods), you are promised a yummy dinner…

Finally got around to making Skinny Taste’s Easy Bagel recipe that was perfect for the overabundance of yogurt we have right now (don’t ask).  And if you don’t have yeast, no problem as that isn’t one of the very few ingredients.  They are so easy, just yogurt, flour, baking powder and salt.  My family loved them, especially topped with Everything But the Bagel Seasoning.  Note – I made them twice and the second time I used a rounded 2 teaspoons of baking powder and a full teaspoon of salt.  I thought they got a little more rise and had a touch more flavor.  If you use the EBBS seasoning, remember there is added salt in that, but I also used just plain sesame seeds and thought they used a little oomph.  I used a whole beaten egg for the wash with a splash of water… 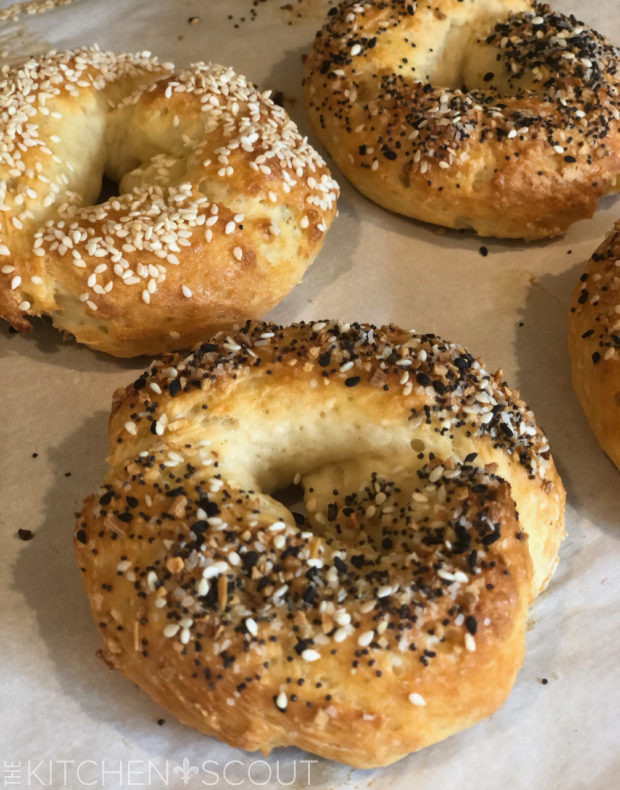 In case you haven’t heard, there has been some girl food fighting that has turned most unpleasant.  The main characters are Alison Roman and Chrissy Teigan and sadly, Roman’s comments have resulted in her column (and her) being put on temporary leave from the New York Times.  Ugh.  I will reserve comment for now, and instead tell you that I made a recipe from her Dining In cookbook that had my family in a tizzy because it was just so dang good.  It was her Paprika-Rubbed Sheet-Tray Chicken that I happily found a link for on Cooking Light’s website!  Roman describes the rub as invoking the flavors of sausage, and even though my husband is traditionally not a fan of fennel, he does love sausage and between the flavor and the cooking method, this recipe is going down as a quarantine favorite.  By the way, I did not have hot paprika, just regular paprika so I added a pinch of cayenne.  What I do love about some of Roman’s recipes, including this one that I posted for her One Pot Chicken with Dates and Caramelized Onions is that she really experiments with cooking methods that result in the most tender and juicy meals!

And another quarantine favorite was Melissa Clark’s Fusilli and Roasted Cauliflower with Capers from her cookbook, Dinner.  You may recall that I posted a delicious Za’atar Chicken with Lemon Yogurt from the same publication?  In any case, the cookbook lay open to the recipe, catching the attention of our older daughter who thought it looked really good so I promised to make it since I have not been without two heads of cauliflower at any time during quarantine!  Such a versatile vegetable that cauliflower.

The recipe couldn’t be easier.  Roast cauliflower with some capers until tender.  Boil off some fusilli pasta and then toss it all together with a combination of butter and oil (not much), more minced capers, lemon zest, garlic, parmesan (optional) and toasted pine nuts.  I used regular fusilli, rather than the whole wheat called for, and added a pinch of red pepper flakes.  I doubled the recipe to serve my family.

My family loved it and everyone had seconds.  Normally I wouldn’t worry about what pasta to use especially during quarantine but the shape of the pasta does matter a little here as the ridges in the fusilli pick up the capers and pinenuts and hold everything together nicely.  I added some crisped up pancetta in this photo…

And lastly, I have been getting some cocktail inspiration during quarantine from Rachel Ray’s husband who puts together some clever concoctions in their home kitchen where they are also filming her show.  He has made two that have involved the use of St-Germain, the lovely elderflower liqueur that I happen to have a bottle of so these are two for your consideration:

Basil Martini (The Basilica):  Muddle a few basil leaves in a shaker.  Add some Vodka or Gin, Splash of St. Germain, Lemon Juice (I used Grapefruit Juice).  Shake or stir with ice and serve in a chilled glass.  Here’s mine…

Cheers all and see you soon!

One Year Ago:  Farro and Broccolini Gratin 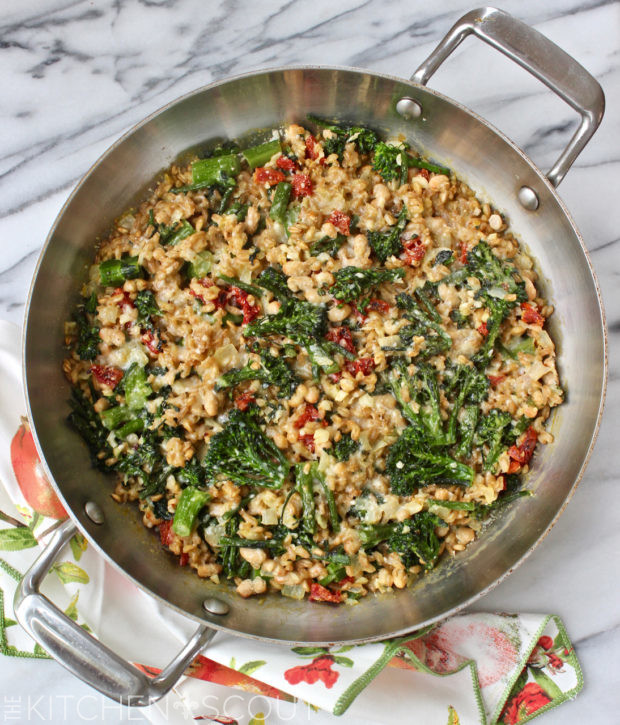 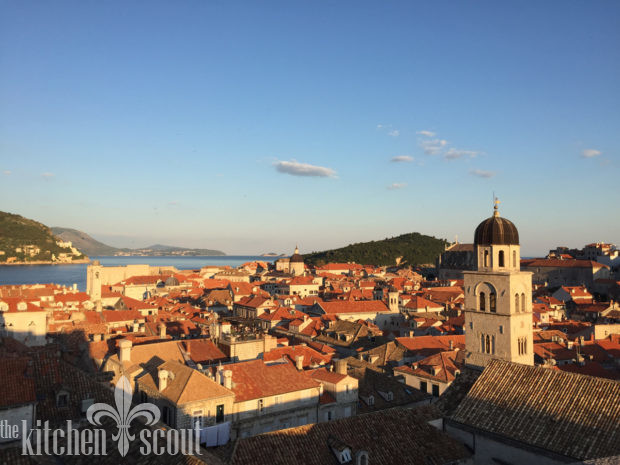 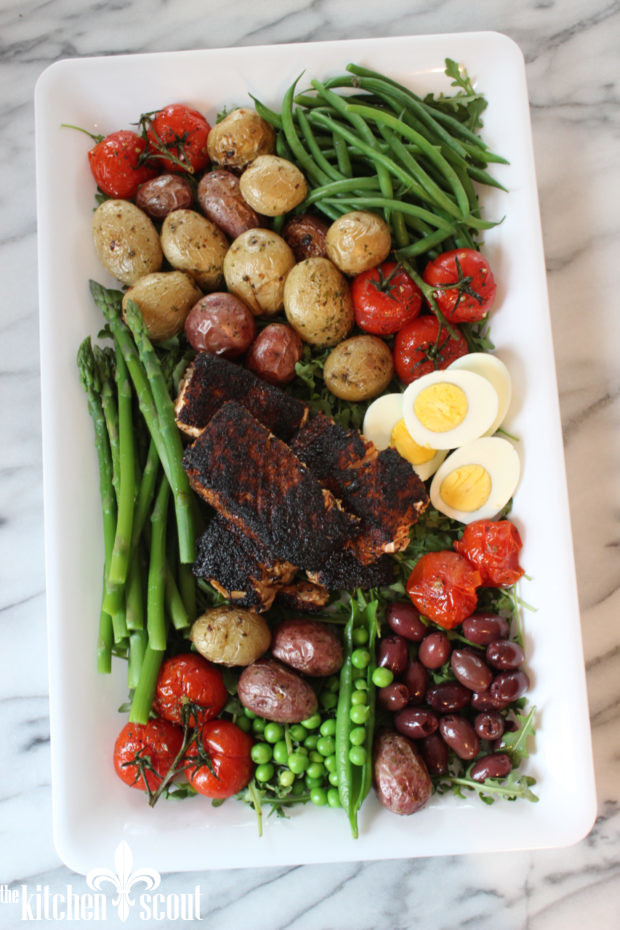 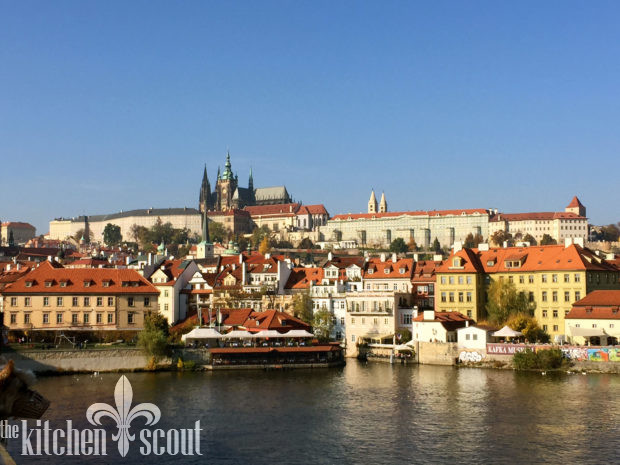 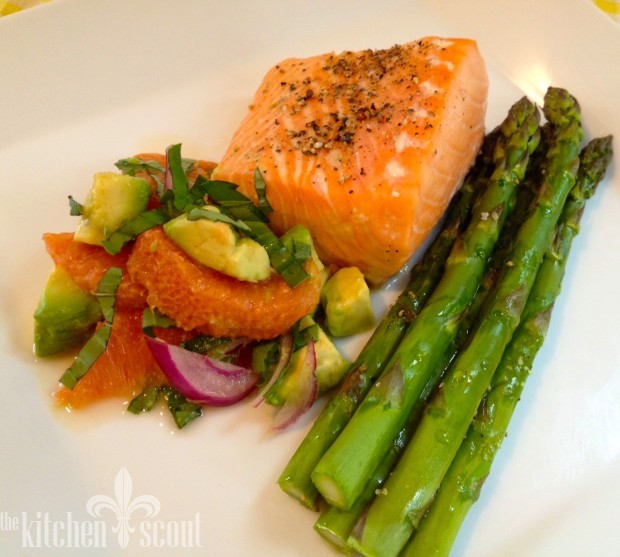