Growing up, my church was not located in our town like so many of my friends’ places of worship. Services were only offered on Sunday mornings and were conducted in a language I didn’t speak. Religious education classes were also held on Sunday mornings, 10:30 to Noon, not exactly the time you wanted to be out of your bed as a teenager.  Wearing pants was not an option.

I wouldn’t trade it for the world.

I must admit that there were times when I envied my friends who attended their mid-week CCD classes together and were able to attend a church service late in the day on a Saturday, leaving their Sunday mornings for slumber.

Even though our church experiences were pretty different, what I did share with my CCD-going friends was the annual observation of Lent.  We would swap stories of what we were “giving up” during this 40 day period of reflection and sacrifice. Would it be television or the telephone this year?  Chips or chocolate?

My father, to whom I am indebted for modeling dedication to faith and church, used to jokingly say he was giving up watermelon for Lent.  This was back in the day when you couldn’t find a watermelon during the Lenten period if you tried.

I, on the other hand, usually gave up chocolate.  I think it has been well established on this blog how much I love chocolate, so you can imagine that this really meant something for me to give it up.  My reward, if you can call it that, was always a beautiful Easter basket that the Easter bunny would leave by my bedroom door.  It usually had a large painted egg-shaped box that was filled with little chocolate eggs.  The boxes were keepsakes, and I had at least one of them in my bedroom bureau for years.

Fast forward to today, our church celebrates Poon Paregentan which, for lack of a better explanation, is our form of Mardi Gras if you will.  It is a last celebration before the Lenten period begins.  It’s a lot of fun, but it was cancelled this year due to one of the many snowstorms we have endured.

Speaking of Mardi Gras, my dinner group met last week and decided that although it was technically a little late, Mardi Gras would be the theme of our dinner.  An email was sent to all of us asking what we would like to contribute.

I responded that I would make this traditional King Cake (like a large cinnamon bun), although I didn’t know what I was getting myself into.  My friend Nicole replied that she wished she knew how to make Moon Pies as that was TRUE Mardi Gras fare.  Yes, she put TRUE in caps and Nicole should know because she is from Mobile, Alabama, the birthplace of Mardi Gras in the USA!

Well, that’s all I needed to hear.  I started googling Moon Pies and found a recipe that looked reasonably easy to execute courtesy of Garden & Gun Magazine.  A Moon Pie has the flavor profile of a s’more, but with a lot more chocolate.  Homemade marshmallow is nestled between two graham cracker cookies and the whole thing is dunked in bittersweet chocolate.  Think Mallowmars or Scooter Pies.  And no, I did not give up chocolate for Lent this year!

During the many parades that occur in Mobile during Mardi Gras, Moon Pies are thrown from the floats to the crowds. The story goes that Moon Pies were first made by the Chattanooga Bakery in 1917.  The owner asked a Kentucky miner what kind of a snack he would like to eat while in the mines.  He answered something with graham crackers, marshmallow and chocolate.  He also said it should be “as big as the moon”.  Thus, the Moon Pie was born.  They became a traditional throw from the “krewes” (parade participants) in 1956.

Nicole and I decided that we would take on the challenge together so let me show you how we pulled it off, give you some tips for how you can make them on the quick, and give you an alternative to the whole darn thing which involves only the graham cracker cookies and some melted chocolate.

Nicole came over with her iPad so she could show me some of her friends’ pictures from the unbelievable balls that take place in Mobile during this time.  Kings and Queens are crowned and elaborate robes are worn.  Nicole suggested I check out the Mobile Press Register, and here are links to the two coronations that occurred this past year here and here.  Oh, the majesty!  Nicole also suggested I visit the Mobile Carnival Museum website where you can see lots of pictures and get a sense of the magnitude of the Mardi Gras celebrations. Ironically, the site had a link to a Boston Globe article about Mardi Gras in Mobile that also paints a good image of what goes on.

Back to the Moon Pies.  First, we made the graham cracker cookie dough which required one special ingredient, Cane syrup which I found at Wegman’s.  You could use dark corn syrup instead. 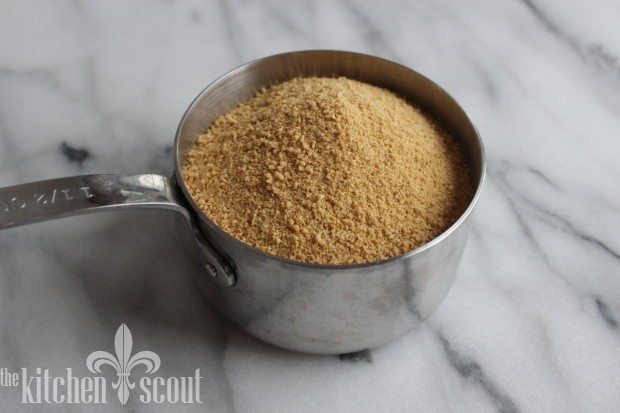 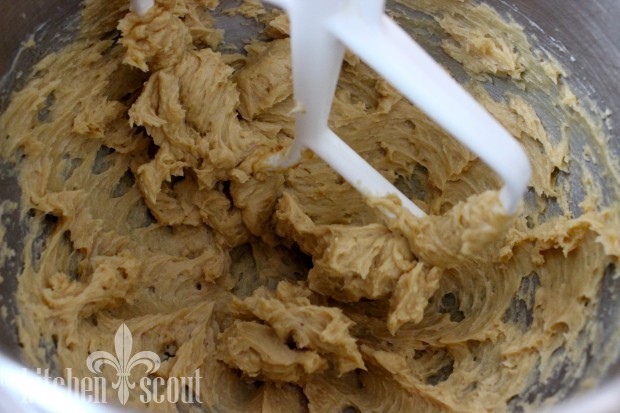 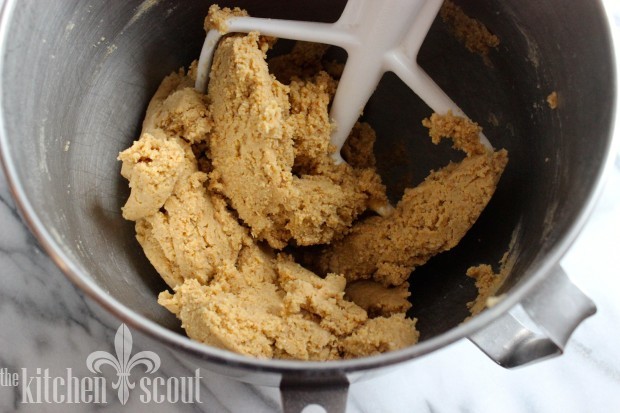 Mix until everything is nicely combined and form into a circle.  Chill for about an hour… 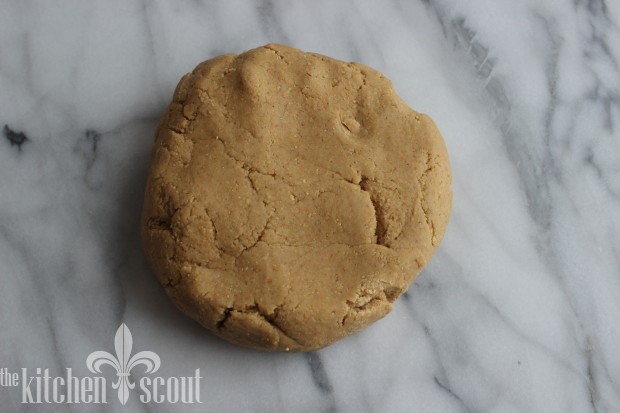 After it has chilled, roll out the dough to a 1/4 inch thickness… 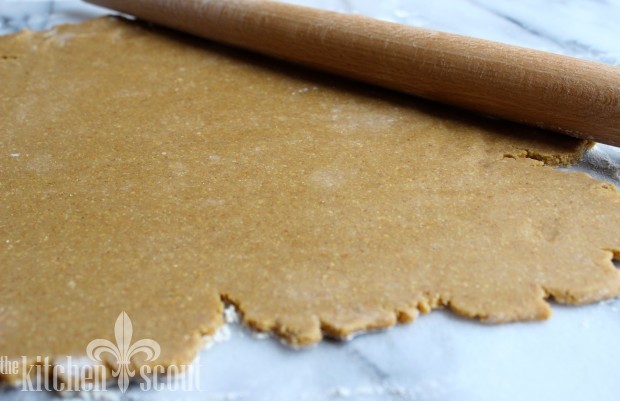 And cut into rounds using a 3 inch cutter… 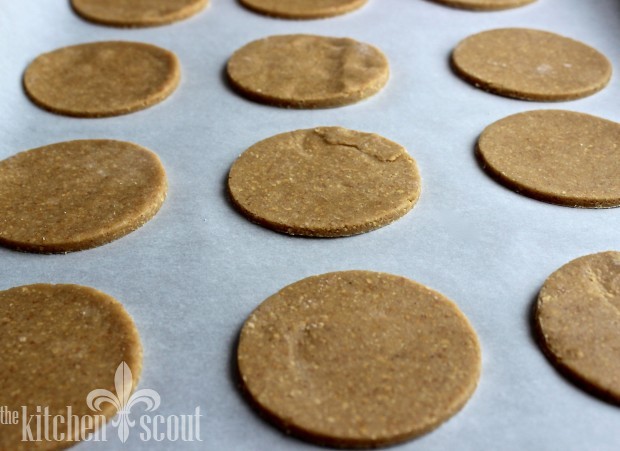 Bake in a low oven for about 10 to 12 minutes.  They will firm up as they cool.  Pretty easy so far, right?

Next, the homemade marshmallow.  You can probably substitute a store bought marshmallow cream if you want.  Do they make an organic version of that by now?

Get your egg whites frothy… 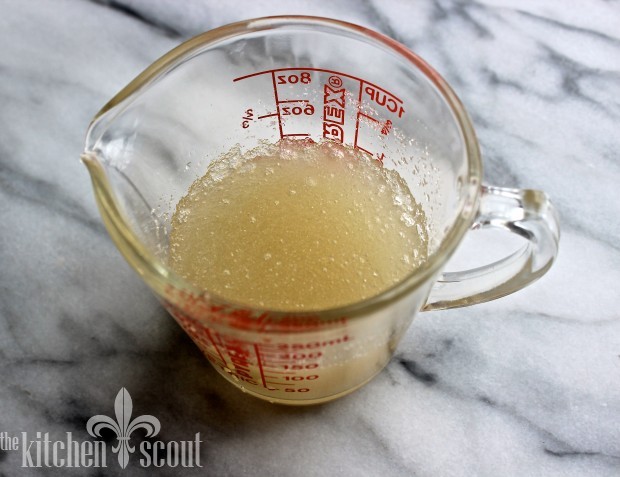 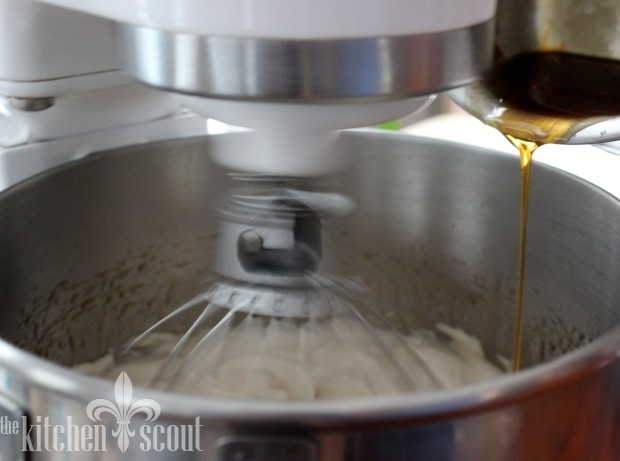 Try to avoid doing this with a food blogger who asks to swap places with you and take the pictures, allowing the sugar to harden slightly and literally making the biggest mess you have ever seen (see all the hardened sugar on the side of the pan – not supposed to happen)… 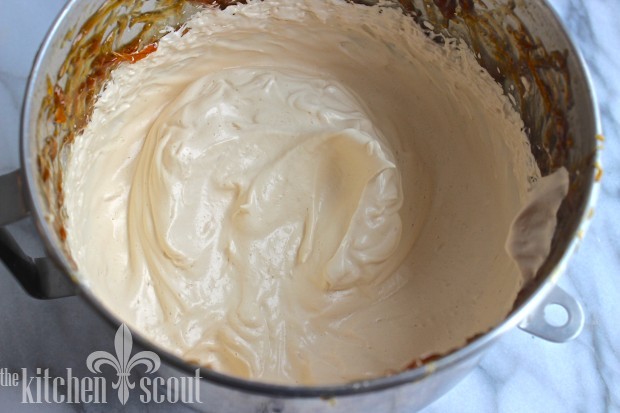 But, it was yummy anyway.  Just not as pure white as the picture from the magazine… 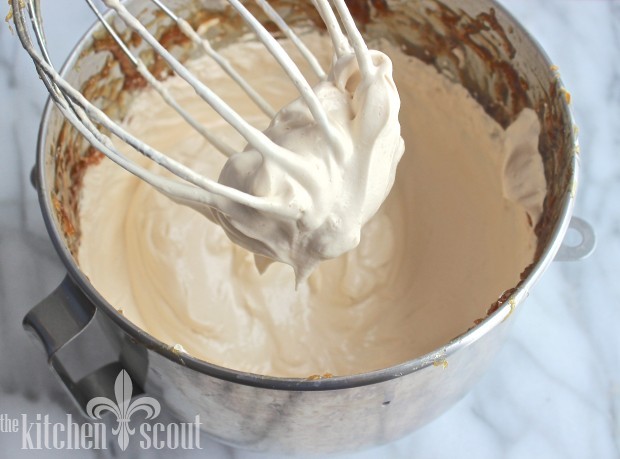 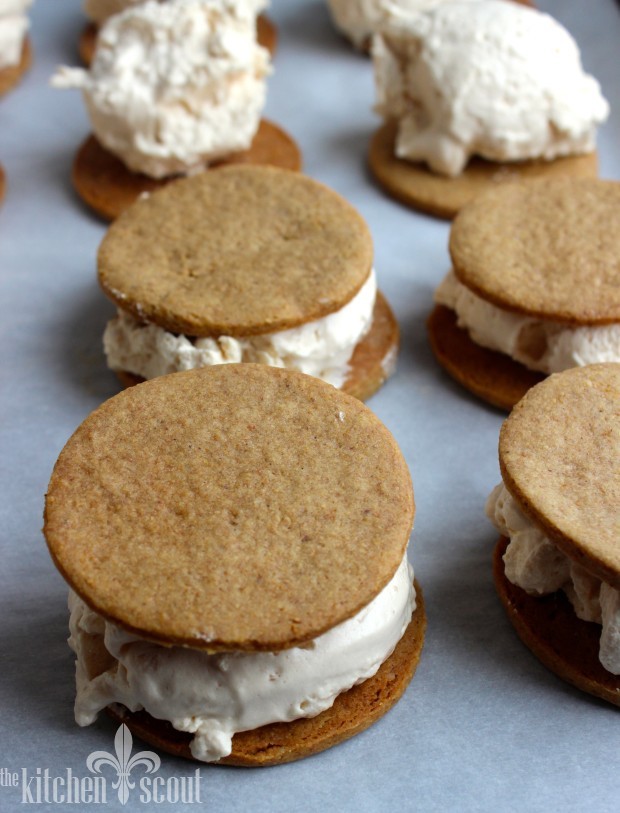 Melt some bittersweet chocolate and mix with a teeny bit of canola oil to make it shine.  Dip the cookies into the chocolate until completely coated and allow to set up on a paper lined cookie sheet… 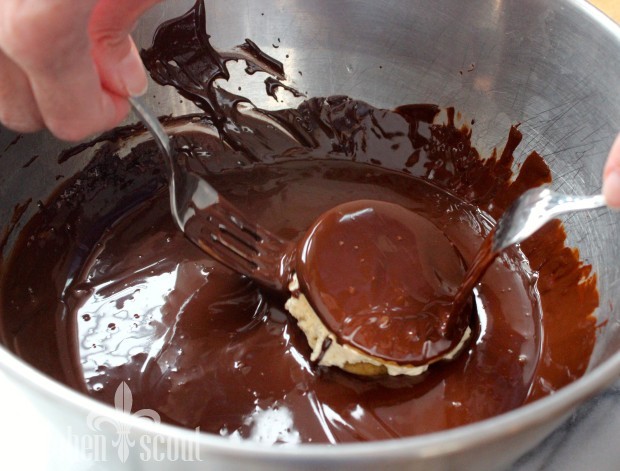 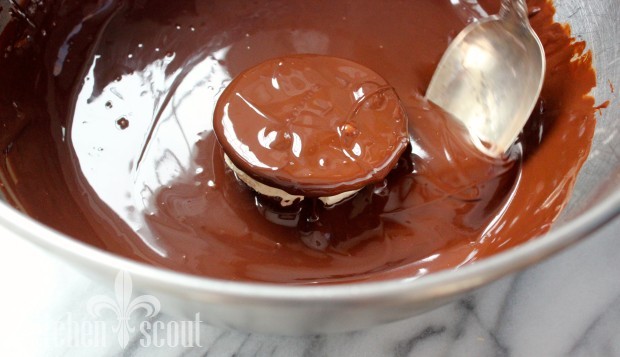 Time for them to set up on a sheet.  Be patient and let them sit for a good long while… 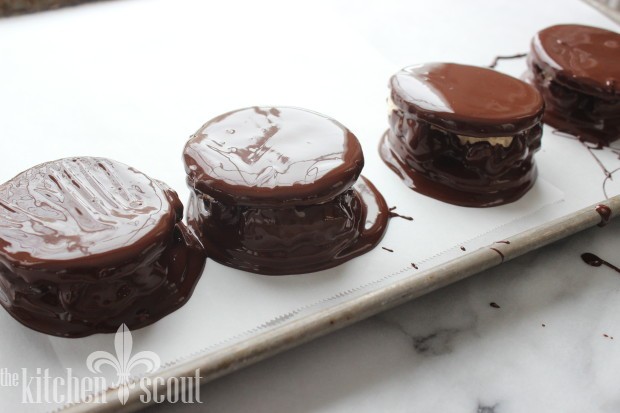 This photo below reminds me of Ring Dings which, truth be told, I craved during my second pregnancy… 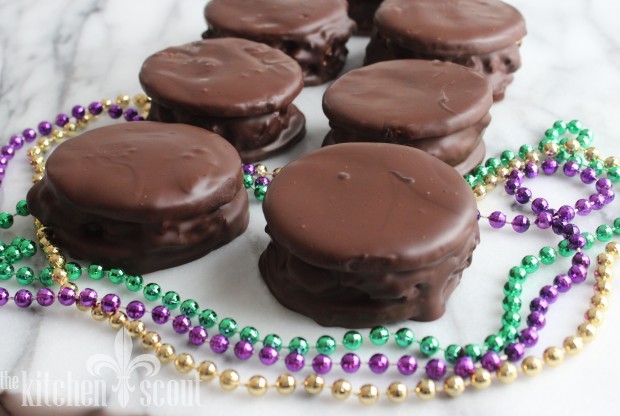 Dinner group really liked them, but admittedly they are a mouthful and after a few bites, we took them home.  Our children, however, devoured them and the next day one of our group’s sons stopped by to grab a few for a road trip to ski country! 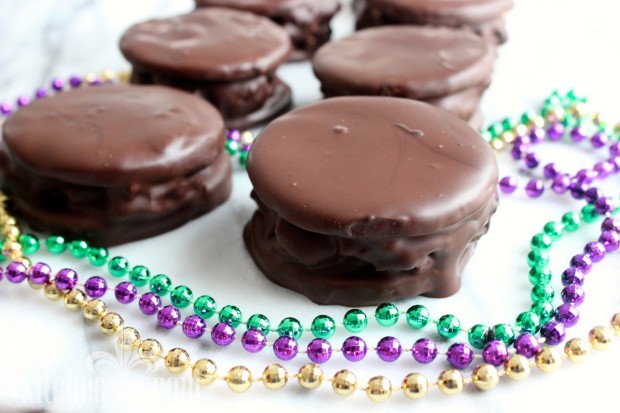 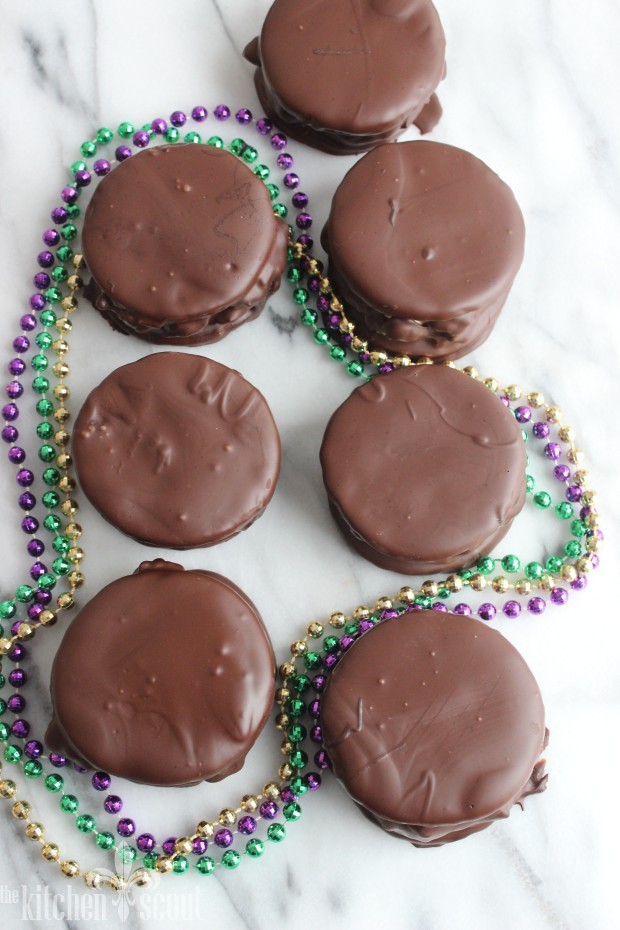 Here’s a view of what’s waiting inside… 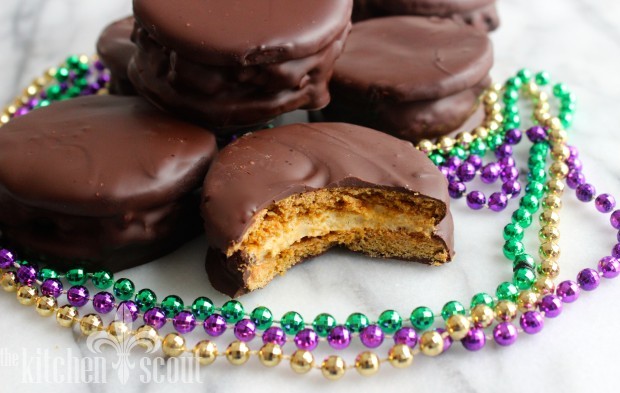 Because the graham cracker cookie is incredibly delicious and I wanted to make a dessert for my husband’s paddle team dinner, I made the cookies again and dipped them in some melted semisweet and white chocolate.  THIS is the version I will be making on repeat because the combination of the graham and the chocolate is just so darn delicious.  White chocolate is tough to work with so I will stick with the semisweet which is fine to use when you don’t have the added sweetness of the marshmallow. You could really dress these up with some sprinkles or sanding sugar… 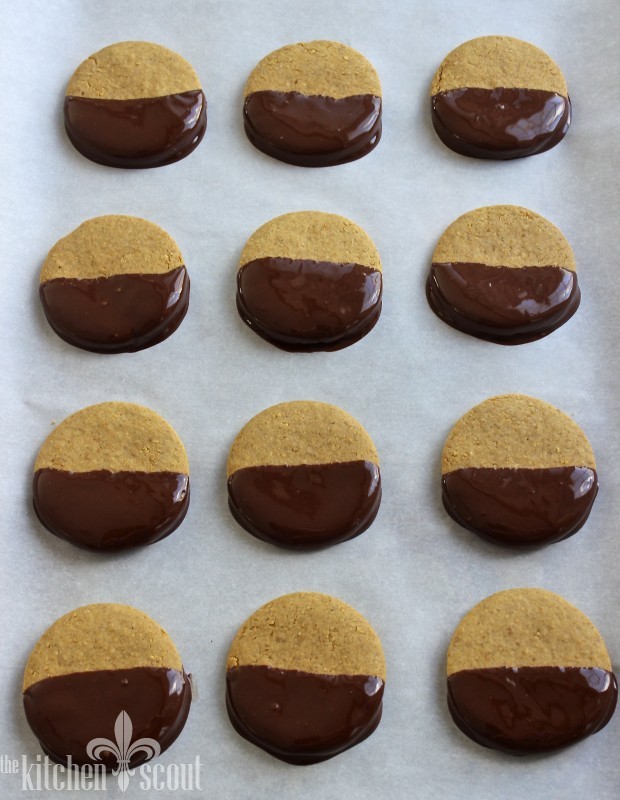 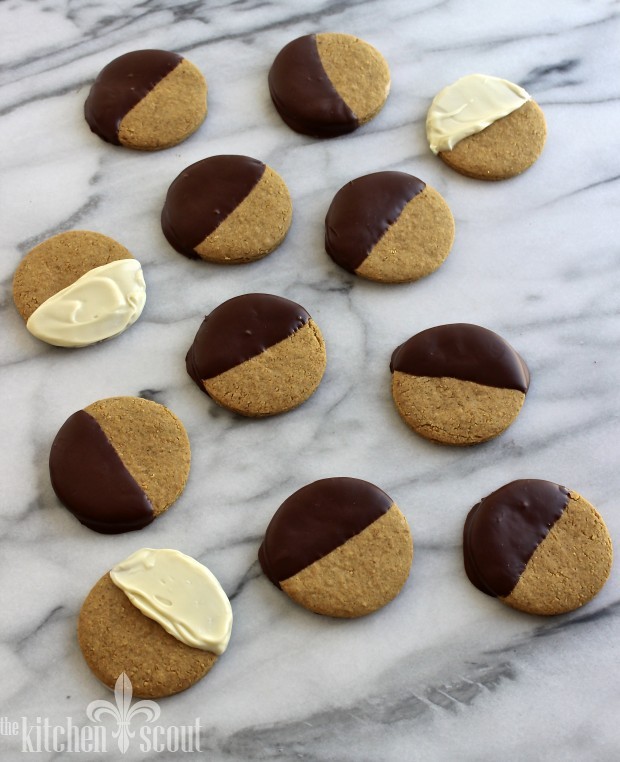 Here is the link to the Mardi Gras Moon Pies recipe on Garden & Gun’s website if you want to give it a try.  I think swapping out store-bought marshmallow will work.  I wrote up the chocolate-dipped graham cracker cookie recipe for you all!  Make them this weekend!

One Year Ago:  Brussels Sprouts, Bacon and Gruyere Frittata

The size of the cookie cutter you use, how thinly you actually roll your dough and the rerolling of scraps will influence the number of cookies you get out of one batch. I got about 26, 2 1/2 inch cookies out of one batch. The recipe is easily doubled.